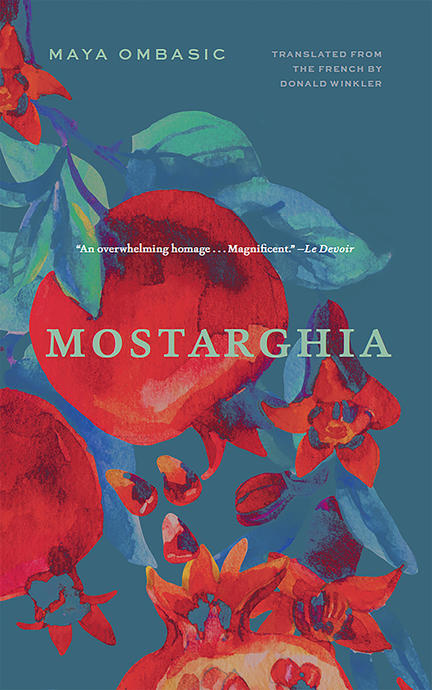 In the south of Bosnia and Herzegovina lies Mostar, a medieval town on the banks of the emerald Neretva, which flows from the “valley of sugared trees” through sunny hills to reach the Adriatic Sea. This idyllic locale is the scene of Maya Ombasic’s childhood—until civil war breaks out in Yugoslavia and the bombs begin to fall. Her family is exiled to Switzerland, and after a brief return, they leave again for Canada. While Maya adapts to their new home, her father never does, refusing even to learn the language of his new country.

A portmanteau of Mostar and nostalgia, Mostarghia evokes Ombasic’s yearning for a place that no longer exists: the city before the civil war, when its many ethnicities interacted in a spirit of civility and in harmony. It refers as well to Andrei Tarkovsky’s classic film Nostalghia, the viewing of which illuminated the author’s often explosive relationship with her father, a larger-than-life figure who was both influence and psychological burden: he inspired her interest, and eventual career, in philosophy, and she was his translator, his support, his obsession. Along with this portrait of a man described by turns as passionate, endearing, maddening, and suffocating, Ombasic deftly constructs a moving personal account of what it means to be a refugee and how a generation learns to thrive despite the struggles of its predecessors.

Just a few days before your death you’re determined still to be strong, to be the man of the hour, he who can do everything, always, even have his children forget the war and the concentration camps, the bombs and the hunger, the danger and the fear. Your doctor has come to inform us that you are living your last days, and that you are to be moved up to the floor for palliative care. They want to put you on a stretcher to carry you to the floor for the dying, but you refuse. You insist on taking the stairs, leaning, when necessary, on me. I feel you to be short of breath and feverish, like a leaf trembling at the approach of a hurricane. I like your smell, your silky skin, your boniness, and your lightness of weight. You were never a big eater, and even before your illness you said that we had to feed ourselves like birds, just enough to be able to fly. I see our two shadows making their way slowly along the hospital corridor. The impassive beauty of the flowers brought to the dying seems extravagant to me in this thankless place. You hold to me, as once you held to my translations in all the countries we knew where you refused to learn the language. For a long time I reproached you for this linguistic sulkiness, but towards the end of your life I understood that it was a deliberate strategy, a refusal to accept any social contract. As you lean on me and your breath comes faster, I search for words to tell you how deeply sorry I am for all our misunderstandings. (How to say sorry properly in your language, no longer really mine ever since others, like young wives unseating the older ones in a harem, have come to dwell in me, and to make me multiple.) A strange feeling runs through my entire being. As I adjust my body to better serve you as a support, my left breast slips naturally into the cavity in your chest, there where once resided the lung and ribs that have been taken from you. Gently, my breast has begun to swell, to breathe, as if it wanted to become the organ you are lacking, as if it wanted to complete you, but also to hide itself from the world and to return to whence it sprang. At the same time, in a neighbouring room, the Rwandan priest you chased away the other day because he wanted to convert you to Christianity, is reading the Bible to a dying person in a low and solemn voice: “And the Lord God caused a deep sleep to fall upon Adam, and he slept: and he took one of his ribs, and closed up the flesh instead thereof. And the rib, which the Lord God had taken from the man, made he a woman.” With your rolling Slavic accent, you whisper in my ear: “My rib is the Adriatic coast. That’s where you were conceived. You will conceive in your turn on another coast.” Your face, like that of mystics in a trance, glows with a beatific smile, and I have a sudden conviction that you have always understood everything, all the languages and all the codes you claimed not to comprehend.

Fascinating and timely...anybody who wants to think deeply about what happens when people are forced to leave their homelands will want to pick this book up." —Book Riot

"Intimate, a filial cri de cœur...The book is run through with dark humour, and some of the most fatalistic scenes are also wryly funny...The condition of nostalgia is both dissociative and cleaving, and it is this tension that Ombasic most adeptly conveys." —Montreal Review of Books

"Strikes a great balance between the ebb and flow between unemotional observations that provide context for the lasting divides in the Balkans, and a humanization of the victims of conflict....[Ombasic writes] with a tender care that evokes a sadness mixed with levity, anger mixed with love." —The Walleye

"After her father dies, Ombasic seeks to resolve all that was unresolved between them in life. Her memoir ripples with the tension of these two great hearts each trying to shoulder an outsized burden... Subtly and with lyricism, Ombasic unpacks her father’s role in her history alongside the role of their hometown, Mostar, not to mention the Balkans, religion, communism, war, displacement, and nostalgia.” —Foreword Reviews (starred review)

"With great candor, Ombasic shares how her experience as a refugee differed from her father’s...Through beautiful prose and impressive attention to detail, Ombasic paints a loving yet honest portrait of her father in all his complexity." —OpenCanada

"An overwhelming homage, clear-eyed and drenched in tenderness, Mostarghia is driven by Maya Ombasic's strong, sensitive voice, which allows us to glimpse the reverse side of the shadow of exile. Magnificent." –Le Devoir (Montreal)

"In an unadorned style, which contains emotion by restricting itself to facts, the author recounts her years during the war, then her exile in Switzerland, then Canada. The book's strength stems in large part from its ability to show the concrete daily consequences of a war from which the family suffers without participating in it directly, to showcase the absurdity of the issues--ethnic, religious, territorial--from which children and parents feel themselves estranged." –Le Monde (Paris)

"The book, its title inspired by Andrei Tarkovsky's film Nostalghia, is a daughter's love song to her father and the tale of her salvation, her refusal to be defeated by depression in order to move on." –l'Humanité (Paris)