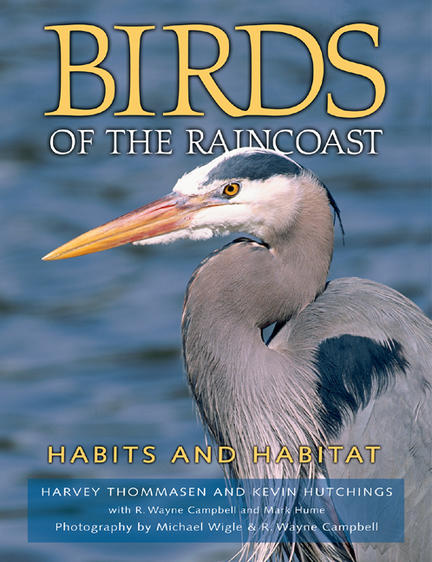 * Did you know the American redstart turns its eggs every eight minutes to ensure the developing bird stays warm on allsides?
* Did you know the female bufflehead, the smallest of all waterfowl in North America, weighs less than a pound, or only 325 grams? The largest waterfowl, the trumpeter swan, weighs over 30 pounds or 13.6 kilograms.
* Did you know that birds that spend a lot of their lives on the ocean can drink seawater? They have large glands nestled between their eyes that remove excess salt from the blood.
* Did you know at least 32 species of birds are known to eat snakes? Even the American robin has been seen feeding young garter snakes to its babies.

Birds of the Raincoast represents the next step in West Coast bird books, a treasury of exceptional, large-format photographs with an informative text that moves beyond simple identification to probe deeper into the lives of our feathered friends. It examines birds in their environments, noting what they do, and where and when they can be found. In an engaging, familiar style enlivened by the authors'personal experience and highlighted with intriguing facts by renowned bird biologist Wayne Campbell, Birds of the Raincoast is an indispensable tool not just for learning how to find coastal birds, but also for gaining an understanding of their natural history.

Michael Wigle has lived and worked in on the Central Coast of British Columbia for 19 years. He has worked as a tree planter, and on watershed assessment in the Bella Coola area. His photos appeared in BC Outdoors Magazine, and British Columbia: A Natural History. He lives in Bella Coola.

Kevin Hutchings is an Assistant Professor of English at the University of Northern British Columbia. He has published numerous essays on the relationship between English literature and the history of ecological and environmentalist thought. His book Imagining Nature: Blake's Environmental Poetics (McGill-Queen's University Press, 2002) examines William Blake's poetic representations of nature during the Romantic period in England, an era wherein concerns for environmental protection and animal rights first became prominent in Western history.

Wayne Campbell is a renowned bird biologist and co-author of Birds of British Columbia: Volumes 1-4. Born in Edmonton, Alberta, he graduated from the University of Victoria in 1976 and received his M.Sc. from the University of Washington in 1983. After graduation he joined the staff of the University of British Columbia as Curator of the Cowan Vertebrate Museum in the Department of Zoology. For almost 20 years, Wayne Campbell has been the Curator of Ornithology at the Royal British Columbia Museum where he conducted wildlife inventories of remote areas of the province including the first complete census of breeding seabird colonies. Since the early seventies, Wayne Campbell has spoken to naturalist groups in almost every B.C. community to impress upon them the importance of their contributions to the knowledge of the birds of our province. He has written more than 300 scientific and popular articles, reports and books on higher vertebrates, including Birds of British Columbia, for which he was one of the six co-authors.

Mark Hume is an award-winning journalist and former senior correspondent with the Vancouver Sun. He is the author of The Run of the River and Adam's River and has published articles in the Boston Globe, the Torotno Star, Equinox, Reader's Digest and Fly Fishing. He lives in Vancouver, British Columbia.

Read what arts reporter Annie Boulanger had to say about Birds of the Raincoast in a href=http://www.burnabynow.com/issues04/112104/entertainment/112104ae2.html>Burnaby Now.

The Globe and Mail recommended Birds of the Raincoast in a special pre-holiday season section of their a href=C:\Documents and Settings\nadine\Application Data\Qualcomm\Eudora\attach\globeandmailstory.htm>Saturday, December 4 edition.

In "Giving big", an article highlighting "Photos and fauna, gardens and glass, comics and cities: great stocking-stuffers all -- provided you've got really large stockings," the Globe described Birds of the Raincoast as:

"Somewhere between a field guide and a coffee-table tome, this book takes the reader for a series of bird-watching walks through nine different landscapes in British Columbia. It's a discursive walk, with descriptions of the seasons of the land and with lots of photos of birds you might see. Some of the birds are West Coast specialties, but many are familiar to birders anywhere in the country."

"Harbour Publishing has done it again. This book is a gem to awaken all of us to the beauty around us when we step out our door. It is the kind of book and the kind of publishing company that makes us glad we chose this part of the world to reside. These five talented individuals are not necessarily ornithologists by trade, but bring to the study a true passion for the subject which is so strong that it literally becomes contagious. One of the main reasons this occurs is that this is not just another pretty book about birds. It is a serious identification book, but instead of the usual stoic shots, Wigle and Campbell have made scenes breathtaking and in some cases heartwarming...This book would be an outstanding gift to the family who wants to bring what they are seeing to life, to see just how all the elements of a habitat fit together."
-Judith Schweers, Daily News (Prince Rupert)

Other titles by Harvey Thommasen

River of the Angry Moon

Seasons on the Bella Coola

The Stories of Clayton Mack

Other titles by Kevin Hutchings

Life in the Heart of the Coast Mountains

Other titles by Michael Wigle

Romantic Ecologies and Colonial Cultures in the British Atlantic World, 1770-1850

Other titles by Wayne Campbell

The Legacy of a Pioneering Biologist, Educator and Conservationist

Other titles by Mark Hume

Lessons from a Fly-Fishing Master

River of the Angry Moon

Seasons on the Bella Coola

Run of the River, The