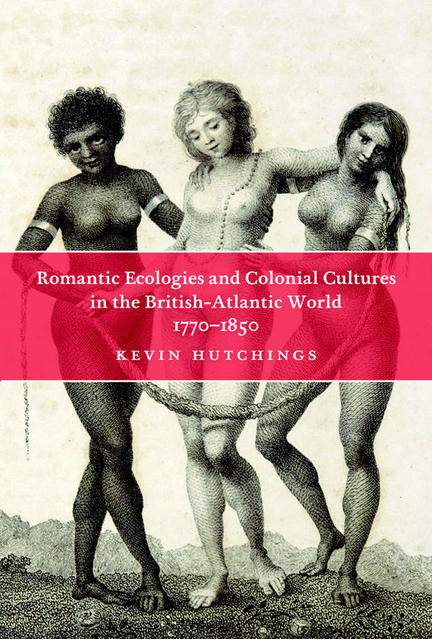 By addressing these and other intriguing questions, Kevin Hutchings highlights significant intersections between Green Romanticism and colonial politics, demonstrating how contemporary understandings of animality, climate, and habitat informed literary and cross-cultural debates about race, slavery, colonialism, and nature in the British Atlantic world. Revealing an innovative dialogue between British, African, and Native American writers of the Romantic period, this book will be of interest to anyone wishing to consider the interconnected histories of transatlantic colonial relations and environmental thought.

Kevin Hutchings is an Assistant Professor of English at the University of Northern British Columbia. He has published numerous essays on the relationship between English literature and the history of ecological and environmentalist thought. His book Imagining Nature: Blake's Environmental Poetics (McGill-Queen's University Press, 2002) examines William Blake's poetic representations of nature during the Romantic period in England, an era wherein concerns for environmental protection and animal rights first became prominent in Western history.

"This is an ambitious work that successfully attempts nothing less than the synthesis of several strands of literary and cultural analysis that have helped define Romantic studies in the last generation of scholarship (c.1990-present)." Mark Lussier, Arizona State University
"Hutchings makes a valuable contribution towards the theorization of postcolonial ecocriticism, developing a two-pronged approach that is attentive to both materiality and ideology, as well as to their inevitable entanglement, arguing persuasively that ecopoetics cannot be cordoned off from ecopolitics." Kate Rigby, Monash University
"But Romantic Ecologies and Colonial Cultures in the British-Atlantic World would not be the groundbreaking study it is without Hutchings's attention to the complexity of Ojibwa writer George Copway's inconsistent strategy of counter-discourse to those doctrines of segregation and removal. With Romantic Ecologies and Colonial Cultures, Hutchings gestures towards questions about the politics of patronage and publication, particularly with respect to the writings of Native American and African writers of literary romanticism." Vermonja R. Alston, Department of English, York University
"Romantic Ecologies makes a significant contribution to the study of early Canada-particularly, for its attention to indigenous writers and communities." Nicholas Bradley, Canadian Literature
"Hutching's readings of Richardson's play The Indians and Campbell's epic poem Gertrude of Wyoming will prove invaluable for those interested in transatlantic Romanticism. This volume complements Tim Fulford's Romantic Indians (2006) and Wordsworth in American Literary Culture, ed by Joal Pace and Matthew Scott (CH, Oct'05, 43-0814) Summing Up: Highly Recommended." D. A. Robinson, Widener University
"Refusing to separate ecopoetics from ecopolitics, Hutchings's book is notable for its ability to question representations of nature while drawing attention to its materiality. Of particular interest to postcolonial and Romantic scholars, it deserves attention from any ecocritic interested in interconnections between nature and culture, politics and representation, and the two sides of the Atlantic." Erin James, University of Nevada

Other titles by Kevin Hutchings

Birds of the Raincoast