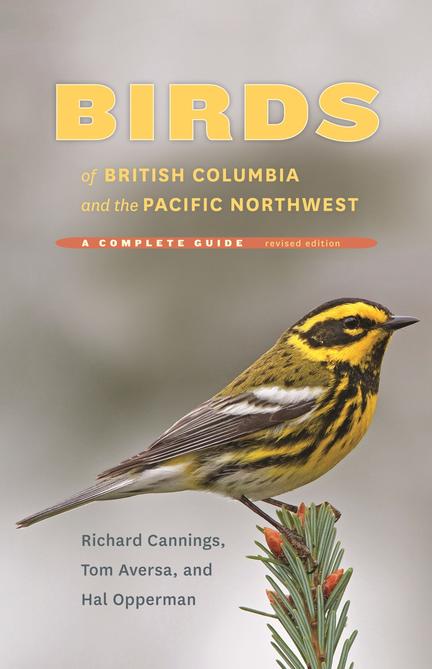 The essential bestselling field guide to every bird species found in BC and the Pacific Northwest, now revised and updated.

“For the majority of serious birders in the West who tend to limit their explorations to one or another state or province, this guide should expand their horizons and encourage more cross-border birding. In sum, this guide is an essential reference for birders west of the continental divide, particularly for intermediate and advanced observers.”—Eugene Hunn, Western Birds: The Quarterly Journal of Western Field Ornithologists

Discover more than four hundred bird species in Birds of British Columbia and the Pacific Northwest—the quintessential guide for serious birders or those who are ready to take their bird-watching to the next level. In this newly revised and updated edition, join renowned bird experts Richard Cannings, Tom Aversa, and Hal Opperman as they illuminate key identification traits, vocalizations, seasonal status, habitat preferences, and feeding behaviours. Compact full-page accounts include maps and nine hundred photographs by the region’s top bird photographers. With a wide territorial range that covers much of BC through to southern Oregon and the Rocky Mountain crest west beyond the Pacific coast, this is the most complete and comprehensive portable guide of its kind on the market.

Richard Cannings is a renowned naturalist, conservationist and lecturer on birds and bird habitats. He works as a consulting biologist assessing endangered species and organizing bird population surveys, and he can be heard on the CBC Radio 1 program BC Almanac as its regular birding expert. He is the author of An Enchantment of Birds, The Rockies: A Natural History, and Birds of Interior BC and the Rockies and is co-author of British Columbia: A Natural History, Birds of Southwestern British Columbia, and the upcoming Birds of British Columbia and the Pacific Northwest. He lives in Penticton, BC.

Tom Aversa is the co-author of Birds of Southwestern British Columbia, Birds of the Puget Sound Region, and Birds of the Willamette Valley Region. He lives in Maine, where he participates in citizen science and enjoys teaching about wildlife and mentoring young naturalists while working to conserve land for the Sebasticook Regional Land Trust.

A longtime student of bird life, Hal Opperman has authored, co-authored, edited, and contributed to numerous publications and online resources on birds and birding, including BirdWeb and the Sound to Sage breeding bird atlas, both hosted by the Seattle Audubon Society. Hal received his B.A. in biology from Knox College and his Ph.D. in art history from the University of Chicago. He is now Professor Emeritus of Art History at the University of Washington, where he taught from 1967 until his retirement. His core research area is animals and nature in art.

“This is an invaluable guide to over 400 bird species living the three large eco-regions of the Pacific Northwest - coastal rainforest, forested western cordillera, and North America’s northernmost deserts. Colour-code bars and headings help organize the text into groupings by bird family. … This guide is an accessible resource for all ages and useful to all levels of bird observers….”

“[T]his handy guide provides the relevant information for locating, identifying, and understanding a bit about the life histories of just over four hundred bird species to be found in southern British Columbia, Washington, and Oregon. It’s just the right size for those going afield”

“For the majority of serious birders in the West who tend to limit their explorations to one or another state or province, this guide should expand their horizons and encourage more cross-border birding. In sum, this guide is an essential reference for birders west of the continental divide, particularly for intermediate and advanced observers.”

Other titles by Richard Cannings

A Natural History of Its Origins, Ecology, and Diversity with a New Look at Climate Change

A Guide to Nature along B.C. Highways

A Journey through Time

Birds of Interior BC and the Rockies

A Photographer's Journey through the Southern Coast Mountains

Roadside Nature Tours through the Okanagan

Other titles by Tom Aversa

Other titles by Hal Opperman