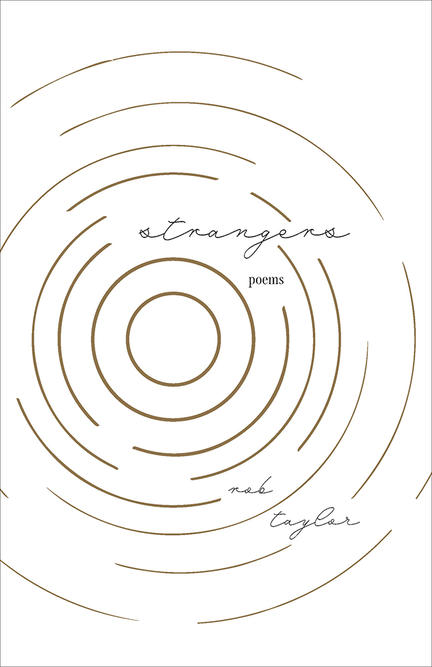 “It makes no sense. You would be strangers / if not for this.”

In Strangers, Rob Taylor makes new the epiphany poem: the short lyric ending with a moment of recognition or arrival. In his hands, the form becomes not simply a revelation in words but, in Wallace Stevens' phrase, “a revelation in words by means of the words.” The epiphany here is not only the poet’s. It’s ours. A book about the songlines of memory and language and the ways in which they connect us to other human beings, to read Strangers is to become part of the lineages (literary, artistic, familial) that it braids together—to become, as Richard Outram puts it, an “unspoken / Stranger no longer.”

Rob Taylor was born and raised in Port Moody, BC, and lives in Vancouver with his wife and son. He is the author of two books of poetry: The News (Gaspereau Press, 2016) and The Other Side of Ourselves (Cormorant Books, 2011). In 2017, The News was shortlisted for the Dorothy Livesay Poetry Prize, and in 2010 the manuscript for The Other Side of Ourselves won the Alfred G. Bailey Prize. He was the poetry editor at PRISM international in 2014–15. Rob has run a blog devoted to Canadian poetry, Roll of Nickels, since 2006. In 2015 he received the City of Vancouver’s Mayor’s Arts Award for the Literary Arts as an emerging artist. He teaches Creative Writing at the University of the Fraser Valley.

“It takes a special temperament to be able to write as directly and intimately about such situations as Taylor does without lapsing either into sentimentality or self-pitying melodrama. There is indeed nothing showy or theatrical about Taylor’s poetic methods, and although the endnotes reveal a wide range of literary sources, he wears his knowledge lightly ... These poems’ disarmingly frank explorations of self knowledge represent a major advance on an already impressive poetic career.”—Christopher Levenson, The Ormsby Review

"If 'Imagery is the memory of memory' as Stanley Plumly believed, Rob Taylor’s Strangers out with Biblioasis press uses imagery as both revelation and reconciliation. The poems tease epiphany from memory, memory from language, language from grief and loss. I urge everyone to go out and buy this wonderful poetry collection that dares sadness and boldly remembers, imagining a present moment where our deceased loved ones and friends are still close by, albeit unseen, making loss and life more palpable."—The Miramichi Reader

"Taylor’s most affecting and adept poems remix actual quotations from the project participants inside of poetic structures and techniques. The saddest poem, perhaps, is the one that gives the book its title: 'When people say, "So how are you?" / really they want you to say, "Oh I’m great." / I’m sure there’s something chemical to it, but // when you say, "Oh not so great" / people go, "I didn’t want to hear that." / I have been trained since I was a very young child.'"—Jonathan Ball, Winnipeg Free Press

"[Taylor's] charming and insightful blending of life and death, memories and premonitions, often catches the reader off guard with casual offhand profundity … Thanks to his poetic directness we are emotionally with him and his family all the way.”—Christopher Levenson, Vancouver Sun

"The News has an odd and noteworthy relationship with sentimentality … Rather than striking an ironic and self-effacing stance, a stance which a lesser poet would no doubt have taken, Taylor engages honestly, vulnerably, and aptly with his topic … Despite this being the poet’s second collection, it will no doubt be cherished like a first born.”—Richard Kelly Kemick, The Fiddlehead

“Taylor’s new book makes you not want to take anything for granted. Waking up to your partner playing Ella Fitzgerald. Dinner with friends. Appreciating a good cranberry sauce. The news is good.”—Matthew Walsh, Poetry is Dead

Other titles by Rob Taylor

What the Poets Are Doing

The Other Side of Ourselves

Poetry That's Going to Grab You

Great books to read before for National Poetry Month is out.