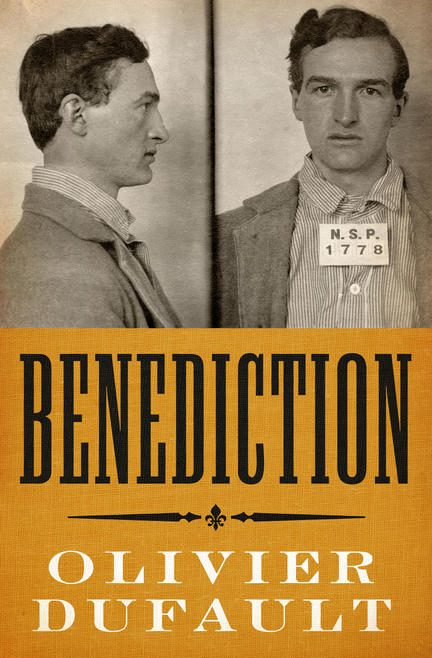 Based on the true story of North America’s most unlikely cowboy, Benediction is a gritty, trenchantly observed tale of fraud and reinvention in the Old West.

In 1907, the fifteen-year-old French-Canadian Ernest Dufault left his home in Quebec for Montana, where he was promptly arrested as a cattle thief and, as a prisoner of the state of Nevada, passed himself off as an American cowboy named Will James. Over the next few decades, Dufault, a.k.a. James, would flourish as a cowboy and horsebreaker and go on to become an artist, a soldier, a Hollywood stuntman, a bestselling author of award-winning westerns — and his own false memoir. Dufault was so successful a pretender that he was later inducted into the Hall of Great Westerners, and his estranged wife, Alice Conradt, would only learn his true identity when, at the age of fifty, Will James died an alcoholic and left his estate to a man she had never heard of: one Ernest Dufault.

In Benediction, Olivier Dufault recreates the true story of his distant relative Ernest’s incarceration in a Nevada prison for rustling cattle and his subsequent reinvention of himself as “Will James.” Relying on authentic historical materials including letters, telegrams, and court documents as much as his own imagination, Olivier Dufault’s magnificent novel is a posthumous benediction of an exceptional American life in which truth and lies walk side by side.

OLIVIER DUFAULT grew up in Acton Vale, Quebec, where he was raised on the stories of his distant cousin’s exploits in the American West. Benediction is his first novel. He lives in Montreal.

The travelling companions had been back on the road a few hours, and Lew had picked up his drinking where he’d left off before deciding to nap. As they made their way south through Spring Valley, on the northwest edge of Lincoln County, near the borders of White Pine and Nye counties, they caught sight of a herd out to pasture less than a mile away.

They approached slowly, and the herd didn’t scatter. The animals scarcely paid the two cowboys any mind. Will and Lew counted thirty-odd head, no horns.

“GS?” asked Hackberry, checking the brand high on their hindquarters.

“The Lazy GS. The Swallow brothers’ outfit over in White Pine. Got a whole post office just for them, up in the district they call Shoshone.”

Will and Lew stayed on their horses a minute, smoking in silence and circling the herd. The wheels in Hackberry’s head were turning, as if he were focusing every ounce of concentration on the task of sobering up so he could think clearly for a moment. He opened his mouth a few times but nothing came out. Will put him out of his misery.

“Something botherin’ you, Lew?”

“You reckon they just wandered all the way out here?”

“Sure do look that way.”

Nowhere did they see the slightest trace of horse tracks, either fresh or old. No one knew that these cattle were out here with the two men, some twenty miles south of the Lazy GS Ranch and the county line.

“Figger you could blot that brand?”

“Well, we can’t just go and sell them in Ely. Word would get around too fast.”

Ely was the biggest livestock hub in this part of Nevada. Ranches from all over the eastern, central, and northern parts of the state sent their cattle through Ely on the way to Denver.

“Not sure what to do. The Swallows may be bastards, but we could still bring them their cattle back. They’d pay us handsomely.”

Lew sat up tall on his horse.

“Did they castrate you along with them steers over the summer?”

Will thought for a moment.

“I know a place not far from the Utah state line. Oasis. Kinda place where they don’t ask questions.”

“You took the words right out of my mouth. Oasis! Now there’s the Will James I thought I knew.”

Now it was Hackberry’s turn to think a little. He was positively reinvigorated, and grinning like a kid.

“From Oasis, I’ll catch the train to Denver. I know people there. It’ll be easy and we’ll be rich. I’m sure we can get thirty-five a head, at least, maybe forty, who knows — maybe even fifty! Those sure are some nice fat cattle!”

Fifty a head was over the top. Will wasn’t about to get carried away, but the prospect of making somewhere in the region of five hundred dollars for a bit more than a week’s work was nothing to sneeze at. It would be enough to set Will up for the winter, maybe even the entire next year, without having to worry too much about what to do next. He’d finally have time to draw, maybe even travel to the West Coast and study at art school. He could visit his idol, the great cowboy painter Charles Russell, in his studio.

“Okay then,” said Will. “We should get there in ten days or so. But you’re gonna have to follow my lead. I know the area better than you, and you’re pretty damn drunk. You got many of those jugs left?”

Hackberry indicated that he did not, and adopted a malicious look that had been known to get him into trouble. Will steered them back to the matter at hand.

“Once we get to Oasis, I know I can trust you. But, until then, it’s me who’s in charge. And for God’s sake, try to sober up a little.”

Lew bared his rickety yellow teeth in all their splendour.

They decided to wait until sundown to make their move. That way, if other riders showed, they could always say they’d just arrived on the scene and were wondering what to do. Lew had no problem finishing his jug — he still had three left — as Will tried to convince him to get some rest. The next several days — or, rather, the next several nights — would be long.

Written with grace and intelligence . . . The work thorough; the details conscientious; the writing is patient, sculpted, and refined . . . A novel dense, rich, and altogether surprising in its evocation of scenes from a century ago.

The majesty and the trials of the territory are magnified as much by the language and precision of its author as by the confinement of its hero.

Brilliant . . . A vivid imagining of a transitional stage in the life of a man who dedicated much of that life to covering his tracks.

A breathtaking novel evoking the great desert spaces of the American West.