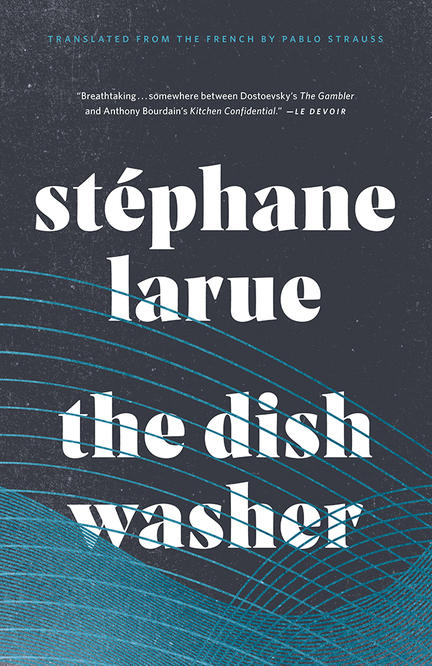 It’s October in Montreal, 2002, and winter is coming on fast. Past due on his first freelance gig and ensnared in lies to his family and friends, a graphic design student with a gambling addiction goes after the first job that promises a paycheck: dishwasher at the sophisticated La Trattoria. Though he feels out of place in the posh dining room, warned by the manager not to enter through the front and coolly assessed by the waitstaff in their tailored shirts, nothing could have prepared him for the tension and noise of the kitchen, or the dishpit’s clamor and steam. Thrust on his first night into a roiling cast of characters all moving with the whirlwind speed of the evening rush, it’s not long before he finds himself in over his head once again. A vivid, magnificent debut, with a soundtrack by Iron Maiden, The Dishwasher plunges us into a world in which everyone depends on each other—for better and for worse.

Stéphane Larue was born in Longueuil in 1983. He received a master's in comparative literature at L'Université de Montréal and has worked in the restaurant industry for the past fifteen years. He lives in Montréal. The Dishwasher is his first book.

AN EXCERPT FROM THE DISHWASHER

THE SNOWPLOW’S ROTATOR BEACONS light up the buildings’ white-coated façades as it slogs up Hochelaga pushing snow. We finally manage to pass it and turn onto a small, dimly lit street. Low-hanging cottony clouds fill the dark sky. The comfortable warmth of the car interior is almost enough to put me to sleep. You can just hear the dispatcher’s voice on the CB. Mohammed turns down his music the moment I get into his black Sonata. He keeps his car immaculately clean. No crumpled up newspaper floor mats, no old coffee cups or leftover food in the compartment under the radio. Just a small Koran with an illuminated cover and a receipt book. The leather seats are good as new. A fresh, minty aroma suffuses the car.

We pull onto Rue Ontario. Tall snowbanks line either side of the street.

Mohammed ignores a call on his cell. He never answers when he’s with a customer. In the extra rear-view mirrors he has mounted on each side of the windshield, I can see his serene face and wrinkled, baggy eyes under bushy eyebrows. We keep driving to Sicard, then turn right. I don’t have to give him directions. Mohammed knows the route by heart, has for some time. Mohammed, Car 287, is senior driver at the cab stand on the corner of Beaubien and des Érables. Mohammed is the cabbie who nightly takes home half the bar and restaurant workers who ply their trade in Rosemont. Mohammed is a fifty-four-year-old Algerian. He’s owed favours by every taxi driver working the area between Saint-Laurent and l’Assomption from west to east, Jean-Talon and Sherbrooke north to south. Even the old guard, the holdouts still driving for Taxi Coop, respect him to a man. Every second time I catch a taxi at the stand, I don’t have to say where I’m going; every third time I don’t even give my address. It doesn’t matter who’s driving. They know me because I’m a customer of #287. Mohammed is as generous as they come. The kind of guy who’d pull over to help two people moving, stuck under a fridge on their outdoor staircase.

I remember one time two or three years ago. We were driving down D’Iberville, getting close to my house, must have been 1:30 in the morning. The moment we turned onto Hochelaga I had a nagging doubt. This was back when I was closing by myself. At the end of a busy night I’d be so spent I’d sometimes forget some of the closing jobs, like making sure the heat lamps were turned off, or that the cooks hadn’t left the convection oven on. That night I just couldn’t remember if I’d locked the back door of the restaurant after taking out the dining room garbage. Mohammed stopped in front of my place. He looked at me in one of his mirrors. I still wasn’t certain, but I convinced myself I must have done it automatically. I got out of the cab. I stood there next to the car, hesitating, with my hand on the open door. Mohammed turned around and said:

He didn’t turn the meter back on. It turned out I hadn’t locked the back door, and the meat order hadn’t been put away in the cooler. When we got back to Aird and La Fontaine, where we’d started, I held out sixty dollars.

He wouldn’t take more than twenty.

“It was my pleasure. You’ll sleep better tonight.”

Sometimes, deep in the night, you come across people like Mohammed. After years of night shifts, years of going to bed at four in the morning, I’ve gotten to know all kinds of characters, from young kids so jacked up on coke they chatter uncontrollably to hard cases content to ride their downward spiral all the way to rock bottom. The night sadly doesn’t belong to the Mohammeds of this world. But they’re out there, making it a more hospitable place for its denizens.

Praise for The Dishwasher

"Carries you away like a speeding taxi in the harsh, dazzling Montreal night." —Catherine Leroux, Giller-shortlisted author of The Party Wall and Madame Victoria

"[The Dishwasher] conjures a vivid and unnerving portrait of a work-world that throbs with stress." —CBC The Sunday Edition

"A compelling coming-of-age novel told at the speed of thrash metal: an unlikely and masterful combination of inventive literary autofiction and an irresistible page-turner...The Dishwasher is a gripping tale of unlikely friendships, a romp through the underworld of late-night Montreal, and a blazing thrash metal ode to the heart of every restaurant, the humble dish pit." —Montreal Review of Books

"A Québécois bestseller thankfully arrives for English readers. One can see how this bleak bildungsroman attracted so much attention in Canada...[The Dishwasher] reads like a cross between the dearly departed Anthony Bourdain and Stephanie Danler’s Sweetbitter, combining the complicated life of a kitchen wretch with a highly literate voice...hypnotizing." —Kirkus Reviews

"Quickly adopted by the kitchen-culture crowd before crossing over to mainstream bestseller lists...There’s no reason to think English Canada won’t soon follow suit with Pablo Strauss’s compulsively readable translation...Larue’s eye is so keen, his grip on his milieu so sure." —Montreal Gazette

"In The Dishwasher, Stéphane Larue invests in plot and character. Chapters are paced like restaurant work: there are quiet lulls for you to catch your breath and torrid rushes where nothing stops moving, the type of chaos where the only way to stay on your feet is to wildly tumble forward...Pablo Strauss’ translation creates a narrator and a world of energy and exhaustion....masterful." —Asymptote

"Larue recounts his story in an energetic style that will keep the reader emotionally vested in the life of The Dishwasher." —CBC Montreal

"An immersive look at the restaurant world make[s] for a gripping read in The Dishwasher...[a] gripping take on a damaged young man finding his place in a particular subculture, and the precise details make for a work that sits comfortably beside works by Anthony Bourdain and George Orwell." —Words Without Borders

"A gruff-yet-affable working class lament, seasoned with hangdog determination and bleary verisimilitude. From the bar booths to the slop sinks to the shooting galleries of a painstakingly rendered Montreal, Larue proves himself a more than adept raconteur of blackout debauchery and wage labor drudgery. Think Nelson Algren by way of Bud Smith, such is the hardscrabble exactitude on offer in this wincing grin of a novel. An industrious and absorbing slab of cutthroat cuisine, Québécois death metal, and gambler’s dilemmas." —Justin Walls, Powell's Books (Portland, OR)

"I've never been to Montreal but I have worked in restaurants and Stéphane Larue's The Dishwasher made me feel as if I do know that world in great, mad, detail. More importantly, it goes so beyond being a food industry novel or a novel about metal or gambling, it is a book that is both tender and tough. I appreciate this book for all that it must've taken to create--it is a wondrous thing." —Hans Weyandt, Milkweed Books (Minneapolis, MN)

"The Dishwasher is a tragi-comic adventure through the dark underbelly of a high end Montreal restaurant kitchen that follows a down on his luck 30-something brilliantly talented artist with fabulous taste in music and a little gambling addiction. As much a philosophical dive into life, love, trust, obsession, and heavy metal as just a damn good story, The Dishwasher made me laugh, cringe,shake my head and drool over amazing food. I absolutely just couldn't put this quirky cool debut novel by Canadian author Larue that is just perfect for fans of David Sedaris or Anthony Bourdain." —Angie Tally, The Country Bookshop (Southern Pines, NC)

"Prepare to get your soul scrubbed down and wrung out. This novel from Quebec captures a world that will be familiar to folks in the service and music industry. Vividly painted scenes from the trenches of a barely-functional kitchen during a rush followed by dizzying late-night get togethers make up this portrait of the loneliness of late-capitalism and the strength we can find from art and our allies. Gritty, loud, and compassionate." —Luis Correa, Avid Bookshop (Athens, GA)

"A simple story of a want-to-be-artist that has to come to terms with the reality of his vices and get out of his own way. The pacing and phrasing of this novel is in beautiful contrast to the raw story told. The sense of place is unforgettable. From the behind the scenes look of working in a restaurant to the weight of addiction, I devoured every page as I found myself hopeful for the underdog in this brilliant debut." —Shannon Alden, Literati Bookshop (Ann Arbor, MI)

“The only thing I did last weekend was read The Dishwasher.” —Caitlin Luce Baker, Island Books (Seattle, WA)

"A perfectly crafted story...the narrator’s conquest of his gambling addiction ebbs and flows, marked by success and failure, hope and defeat...The Dishwasher is a thoughtful examination of a young man at the end of his options—a humanizing, emotive, and entertaining tale of personal growth." —Foreword Reviews

"The turbulent, immersive narration is an experience on its own. The result is often breathtaking: five hundred feverish pages that take us to a place somewhere between Dostoyevsky's The Gambler and Anthony Bourdain's KItchen Confidential.... Poignant and magnificent." —Le Devoir (Montreal)

"Feverish writing, Montreal streets and characters magnificently described, mind-bending descriptions of what happens behind the scenes at restaurants--you'll never see them in the same way once you've finished the book--a story that is both a dark tale and an existential suspense story, it all combines to make the book unputdownable.... It may be over 500 pages long, but so moving is the story that once you've started it, you feel the irresistible desire to devour it in a single sitting." —Le Soleil (Quebec City)

Other titles by Stéphane Larue