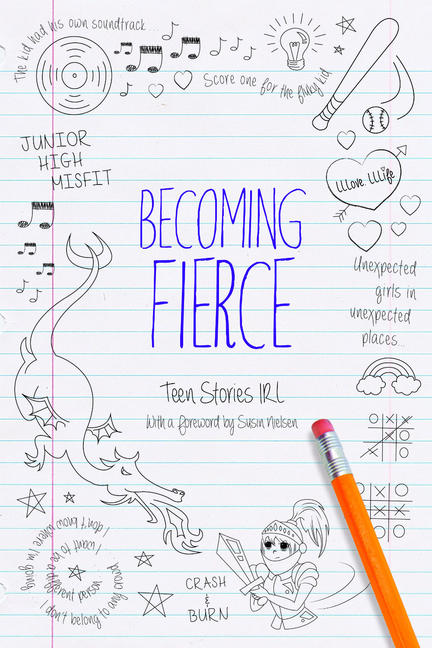 Life is fierce. But so are you. Sometimes it totally sucks being a teen. Trying to fit in, dealing with bullies, a changing body, and the feeling that no one really gets it. It’s hard on the head and often seems like no one else understands. That’s what Becoming Fierce is all about. Those not-so-fun times that come with being a teen but also how others have gone through similar things and made it to the other side. New and established Canadian authors share experiences from their teen years that have stuck with them. Some of the stories are dark and heartbreaking while others are lighthearted and grin-worthy. Regardless, they all have something in common: while things may seem like an epic fail now, they do get better. Susin Nielsen, author of the award-winning young adult novel The reluctant Journal of Henry K. Larsen, contributes the foreword. Partial proceeds go to Kids Help Phone, chosen by Nielsen.

Gerard Collins’ first book, the short story collection Moonlight Sketches won the 2012 NL Book Award and his first novel, Finton Moon, has already won the Percy Janes First Novel Award. He’s won several arts and letters awards, been shortlisted for the Cuffer Prize, published in Hard Ol’ Spot, Zeugma and various other anthologies. He has been a guest speaker at numerous literary festivals and taught workshops in writing for youth. He has a Ph.D. in English and teaches at Memorial University.

As a retired blogger of mild renown, Ben Boudreau has shared more with the internet than any sane person should. After being the first cast out of the inaugural CBC Canada Writes top five, he went on to earn three Canadian Weblog Awards and a single tweet from Kelly Clarkson. Recent projects include spending far too much time writing this short bio.

Chris is author of Eco-Innovators: Sustainability in Atlantic Canada, winner of the Best Atlantic-Published Book Award and finalist for the Richardson Non-Fiction Prize, and the novel, Drive-by Saviours, which was longlisted for Canada Reads and a ReLit Prize. Chris’ creative work has been published by VoicePrint Canada, Descant, Arts East, Third Person Press, Nashwaak Review, Pottersfield Press, Fierce Ink Press, Rattling Books, The Society and The Coast. Visit www.chrisbenjaminwriting.com. He owes a debt to St. Lucia for changing his life for the better.

Alison DeLory is a writer, editor, and teacher living in Halifax. She has been writing stories for newspapers, magazines, and digital platforms for 20 years. She's also written two children's chapter books and contributed to several anthologies. Making it Home is her first novel.

Chad Pelley’s fiction has been recognized by more than a dozen literary awards. His debut novel, Away from Everywhere, was a Coles bestseller, won the NLAC’s CBC Emerging Artist award, and was shortlisted for both the ReLit and CAA Emerging Writer awards, and a film adaptation starring Jason Priestley and Shawn Doyle was filmed in 2015. His second novel, Every Little Thing, was shortlisted for the ReLit Award, and Canada Reads winner Lisa Moore called it “Stylistically fresh and can’t-put-it-down compelling.” He has appeared alongside acclaimed authors at festivals such as IFOA,Vancouver Writers’ Festival, and Writers at Woody Point. His short fiction has won several awards, and has been published in anthologies, textbooks, and journals. He’s taught creative writing at Memorial University, founded Salty Ink.com, and has written for Quill & Quire, The National Post, Globe and Mail, the Telegraph-Journal, and Atlantic Books Today. He is currently the founding editor of The Overcast: Newfoundland’s Alternative Newspaper.

Patti Larsen is an award-winning middle grade and young adult author with a passion for the paranormal. Her YA thriller series, The Hunted, is available now. Book one of that series, RUN, is a recent recipient of the 2012 PEI Book Awards for Fiction. Ten books of her very popular Hayle Coven Novels, beginning with Family Magic, are also out now. Her YA steampunk series, Blood and Gold, can be found on Amazon, along with her YA paranormal novel, Best Friends Forever, The Diamond City Trilogy, The Clone Chronicles and more. Her middle grade novel, The Ghost Boy of MacKenzie House (Acorn Press), is available now. She is a full time writer and a part time teacher of her Get Your Book Done program. Patti lives on the East Coast of Canada with her very patient husband and four massive cats.

Cale Liom is a novelist and poet, currently living in Prince Edward Island. Her first novel, Hide Your Life Away, was nominated for the 2009 Montaigne Medal, was a winner in the General Fiction category of the 2009 Eric Hoffer Book Awards, and a finalist in the 2009 Indie Book Awards. Her first collection of poetry, A Study in Love, was published in 2010 and was nominated for a 2011 Golden Crown Literary Society Award, and was shortlisted for a 2012 Island Book Award. Little is currently working on her MA in English Literature while writing new poems and fiction, and raising twin daughters.

Jamie Fitzpatrick’s first novel, You Could Believe in Nothing (Vagrant Press), has been called “a fast-moving, unsentimental look at amateur hockey, masculinity, mid-life crisis, drink, drugs and family secrets … brisk, engaging and, in the end, very moving” (Globe and Mail). His writing has also appeared in The New Quarterly, St. John’s Telegram, Newfoundland Quarterly and the 2013 Cuffer Anthology (forthcoming). He lives in St. John’s.

Other titles by Allister Thompson

The Story of Captain Angus Walters and the Bluenose

Other titles by Gerard Collins

Other titles by Chris Benjamin

Boy With a Problem

Legacies of the Shubenacadie Residential School

Other titles by Alison DeLory

Some of My Parts

Other titles by Lee D. Thompson

Diary of a Fluky Kid

Other titles by Chad Pelley

Before I Was Me

Other titles by Patti Larsen

Emma and the Ducklings

Other titles by Jamie Fitzpatrick

The End of Music

You Could Believe in Nothing