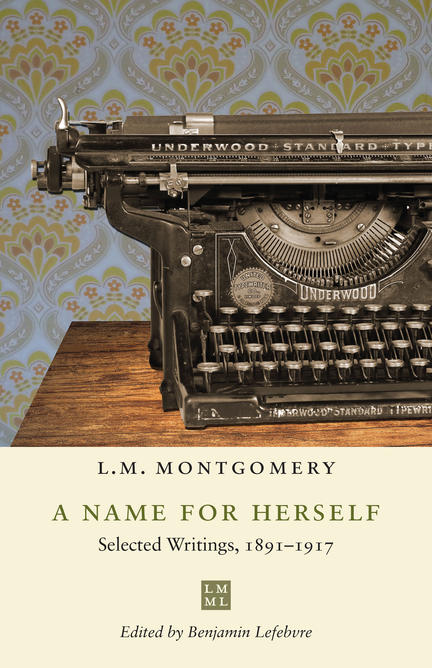 Years before she published her internationally celebrated first novel, Anne of Green Gables, L.M. Montgomery (1874–1942) started contributing short works to periodicals across North America. While these works consisted primarily of poems and short stories, she also experimented with a wider range of forms, particularly during the early years of her career, at which point she tested out several authorial identities before settling on the professional moniker "L.M. Montgomery."

A Name for Herself: Selected Writings, 1891–1917 is the first in a series of volumes collecting Montgomery’s extensive contributions to periodicals. Leading Montgomery scholar Benjamin Lefebvre discusses these so-called miscellaneous pieces in relation to the works of English-speaking women writers who preceded her and the strategies they used to succeed, including the decision to publish under gender-neutral signatures. Among the highlights of the volume are Montgomery’s contributions to student periodicals, a weekly newspaper column entitled "Around the Table," a long-lost story narrated first by a woman trapped in an unhappy marriage and then by the man she wishes she had married instead, and a new edition of her 1917 celebrity memoir, "The Alpine Path." Drawing fascinating links to Montgomery’s life writing, career, and fiction, this volume will offer scholars and readers alike an intriguing new look at the work of Canada’s most enduringly popular author.

Lucy Maud Montgomery had her first poem published at the age of 15 and after completing college she worked for a short time as a journalist before becoming a teacher. In 1908 Anne of Green Gables was published to huge acclaim with Anne of Avonlea coming soon after. Many successful novels followed but by late 1930s, due to personal troubles, illness and depression, she stopped writing. Lucy Maud Montgomery died in 1942 and was buried on her beloved Prince Edward Island.

Benjamin Lefebvre editor of The L.M. Montgomery Library, is director of L.M. Montgomery Online. His publications include an edition of Montgomery’s rediscovered final book, The Blythes Are Quoted, and the three-volume critical anthology The L.M. Montgomery Reader, which won the 2016 PROSE Award for Literature from the Association of American Publishers. He lives in Kitchener, Ontario.

"In this rich volume, Lefebvre’s selections reveal Montgomery as a professional writer who deserves a strong and enduring presence in Canadian letters."

"In this first volume of ‘The L.M. Montgomery Library,’ Benjamin Lefebvre collects and expertly annotates Montgomery’s non-fiction periodical writing, presenting it as a record of her literary apprenticeship … The thirty-five instalments of her column ‘Around the Table,’ signed ‘Cynthia,’ are enthralling, … and A Name for Herself is worth the cover price for these pieces alone."

"Lefebvre, one of the top Montgomery scholars in the world, has painstakingly collected these scattered publications from throughout Montgomery’s career to provide a valuable resource … By including Montgomery’s contributions to these publications, many of which were fleeting, Lefebvre enriches our knowledge of the periodical landscape in North America and demonstrates how these magazines and newspapers were important vehicles for women authors in Canada and the United States."