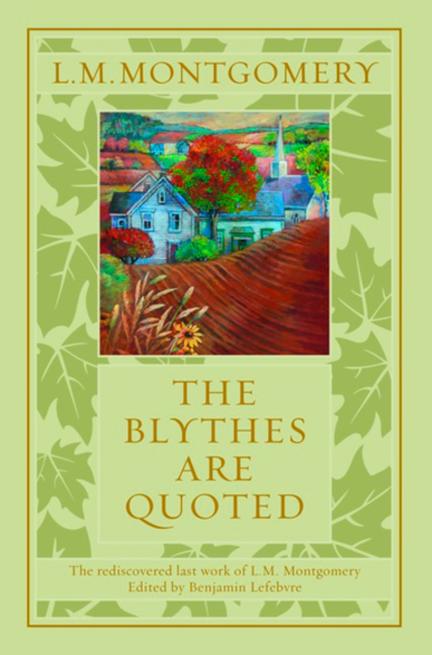 The Blythes Are Quoted is the last work of fiction by the internationally celebrated author of Anne of Green Gables. Intended by L.M. Montgomery to be the ninth volume in her bestselling series featuring her beloved heroine Anne – and delivered to her publisher on the very day she died – it has never before been published in its entirety.

This rediscovered volume marks the final word of a writer whose work continues to fascinate readers all over the world.

Adultery, illegitimacy, revenge, murder, and death – these are not the first terms we associate with L.M. Montgomery. But in The Blythes Are Quoted, completed at the end of her life,the author brings topics such as these to the fore.

Intended by Montgomery to be the ninth volume in her bestselling series featuring Anne Shirley Blythe, The Blythes Are Quoted takes Anne and her family a full two decades beyond anything else she published about them, and some of its subject matter is darker than we might expect.

Divided into two sections, one set before and one after the Great War of 1914–1918, it contains fifteen short stories set in and around the Blythes’ Prince Edward Island community of Glen St. Mary. Binding these stories are sketches featuring Anne and Gilbert Blythe discussing poems by Anne and their middle son, Walter, who dies as a soldier in the war. By blending together poetry, prose, and dialogue in this way, Montgomery was at the end of her career experimenting with storytelling methods in an entirely new manner.

This publication of Montgomery's rediscovered original work – previously published only in severely abridged form as The Road to Yesterday – invites readers to return to her earlier books with a renewed appreciation and perspective.

Lucy Maud Montgomery had her first poem published at the age of 15 and after completing college she worked for a short time as a journalist before becoming a teacher. In 1908 Anne of Green Gables was published to huge acclaim with Anne of Avonlea coming soon after. Many successful novels followed but by late 1930s, due to personal troubles, illness and depression, she stopped writing. Lucy Maud Montgomery died in 1942 and was buried on her beloved Prince Edward Island.

Benjamin Lefebvre editor of The L.M. Montgomery Library, is director of L.M. Montgomery Online. His publications include an edition of Montgomery’s rediscovered final book, The Blythes Are Quoted, and the three-volume critical anthology The L.M. Montgomery Reader, which won the 2016 PROSE Award for Literature from the Association of American Publishers. He lives in Kitchener, Ontario.

Other titles by L.M. Montgomery

Twice upon a Time

A World of Songs

Other titles by Benjamin Lefebvre

In the Key of Dale

Twice upon a Time

Volume One: A Life in Print

A World of Songs