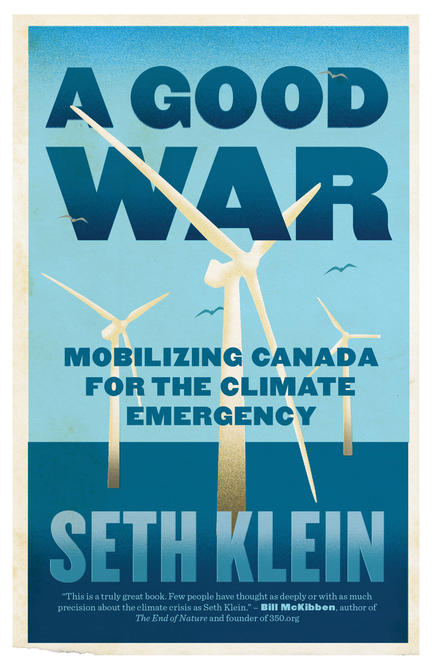 “This is the roadmap out of climate crisis that Canadians have been waiting for.” — Naomi Klein, activist and New York Times bestselling author of This Changes Everything and The Shock Doctrine

Canada needs to reduce its greenhouse gas emissions by 50% to prevent a catastrophic 1.5 degree increase in the earth’s average temperature — assumed by many scientists to be a critical “danger line” for the planet and human life as we know it.

It’s 2020, and Canada is not on track to meet our targets. To do so, we’ll need radical systemic change to how we live and work—and fast. How can we ever achieve this?

Top policy analyst and author Seth Klein reveals we can do it now because we’ve done it before. During the Second World War, Canadian citizens and government remade the economy by retooling factories, transforming their workforce, and making the war effort a common cause for all Canadians to contribute to.

Klein demonstrates how wartime thinking and community efforts can be repurposed today for Canada’s own Green New Deal. He shares how we can create jobs and reduce inequality while tackling our climate obligations for a climate neutral—or even climate zero—future. From enlisting broad public support for new economic models, to job creation through investment in green infrastructure, Klein shows us a bold, practical policy plan for Canada’s sustainable future. More than this: A Good War offers a remarkably hopeful message for how we can meet the defining challenge of our lives.

COVID-19 has brought a previously unthinkable pace of change to the world—one which demonstrates our ability to adapt rapidly when we’re at risk. Many recent changes are what Klein proposes in these very pages. The world can, actually, turn on a dime if necessary. This is the blueprint for how to do it.

Seth Klein was the founding British Columbia director of the Canadian Centre for Policy Alternatives for over two decades and has been immersed in climate change and inequality issues for his working life. He is currently an adjunct professor in urban studies at Simon Fraser University and remains a research associate with the CCPA. He lives in Vancouver, B.C.

This is not a book about climate science. It takes the urgent science and the impacts of climate breakdown as a given. Rather, it is a book about politics, history and policy innovation. It takes as inspiration Canada’s Second World War experience and also finds encouragement from a few other countries that, unlike Canada, are starting to treat this crisis as the emergency that it is. I also draw heavily upon interviews conducted with politicians, academics, activists, Indigenous leaders, labour leaders and others.

I spend some time in the early chapters surveying the principal barriers to transformative climate action. But by and large, I choose to focus on what can be done to overcome these barriers. I believe you will find this an unusually hopeful book, given the subject matter.

Effectively tackling the climate crisis is not a technical or policy problem — we know what is needed to transition to a zero-carbon society, and the technology required is largely ready to go. Rather, the challenge we face is a political one. Climate solutions persistently encounter a political wall; the prevailing assumption within the leadership of our dominant political parties appears to be that if our political leaders were to articulate (let alone undertake) what the climate science tells us is necessary, it would be political suicide. And so they don’t.

This book explores whether we can successfully align our politics with climate science, and the conditions under which it may be possible to practise such a bold politics that is well-received by the public. It outlines what a truly meaningful and hopeful climate program can look like in Canada and makes the case for why our political leaders should embrace this generational mission.

Our sense of what is possible is contained by what we know. Hopefully this exploration of what we did the last time we faced an existential threat can serve to blow open our sense of political and transformative possibility.

Like many of you, as I read the latest scientific warnings, I’m afraid. In particular, I feel deep anxiety for my children, and about the state of the world we are leaving to those who will live throughout most of this century and beyond. All of us who take seriously these scientific realities wrestle with despair. The truth is that we don’t know if we will win this fight — if we will rise to this challenge in time. But it is worth appreciating that those who rallied in the face of fascism 80 years ago likewise didn’t know if they would win. We often forget that there was a good chunk of the war’s early years during which the outcome was far from certain. Yet that generation rallied regardless, and in the process surprised themselves by what they were capable of achieving. That’s the spirit we need today.

“The COVID-19 crisis and Seth Klein’s timely book demonstrate heroic measures that become possible in times of crisis. The coronavirus crisis is not yet assessable by historians. World War II presented the West with an existential crisis for which government institutions, corporations and civil society were utterly unprepared. Yet in astonishingly rapid order, society, government and industry were united in resolve and enabled unprecedented government action and leadership. Read this inspiring book to realize giving up is not an option and ‘can’t be done’ is not an excuse.” — David Suzuki

“One of the great privileges of my life is having Seth Klein as a brother. Here you will see why. This is the roadmap out of climate crisis that Canadians have been waiting for. Serious, specific and madly inspiring, A Good War will fill you with the confidence and courage required to fight like hell for the future we all deserve.” — Naomi Klein, activist, journalist and author of This Changes Everything and The Shock Doctrine

“Seth Klein’s critically important book tells the climate truth: our climate emergency needs a WW2-style mobilization. In this strategic call to action we learn about Canada’s impressive war production, and how we can join the war against climate devastation. Your children’s futures are on every page. Read, organize, act!” — Raffi Cavoukian, singer, author and founder of Raffi Foundation for Child Honouring

“This is an important book, exactly what we need right now. Seth does more than set out the urgency of our climate challenge, he draws a careful study of Canada’s extraordinary and rapid transformation during WW2 to give us a battle plan to address it. Big change is possible, he reminds us. We have done it before. Seth’s book combines urgency and optimism, ambition and clear-eyed understanding of the obstacles to change. It should become an essential resource for policy makers but also for all of us who want to be part of the solution. It is also an excellent and inspiring read.” — Alex Himelfarb, former clerk of the Privy Council and professor of sociology

“Pacifists are not known for evoking war-like rhetoric, so it is one of life’s quirks that I first met an 18-year-old Seth Klein as he toured Canada calling for nuclear disarmament. But, like me, he sees that the only way for human civilization to survive the climate emergency is through an ‘all hands on deck’ approach that has only been seen in times of war — or recently in pandemic. Saving ourselves is a huge challenge. Marshaling the facts, the hope and the path forward is essential work for which writer and policy wonk Seth Klein is ideally suited.” — Elizabeth May, MP and former leader of the Green Party of Canada