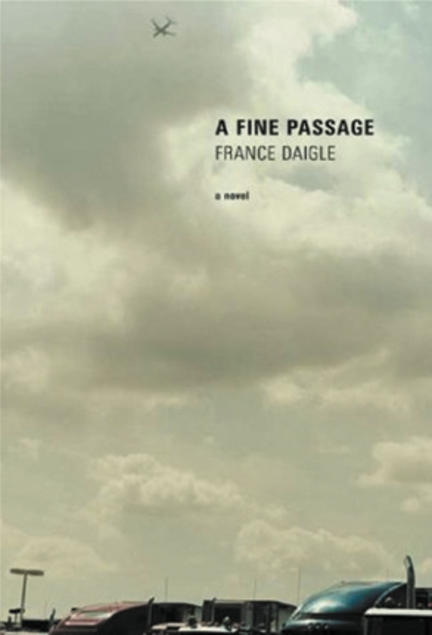 In this extraordinary sequel to Just Fine, we follow many of the same characters who dreamt of escape from the insular, predictable cadences of life in Acadia -- from Baltimore to Israel, San Francisco to Denmark, Moncton to Paris -- in exploration of their newly gained freedom.

Whereas Just Fine had as its central element water, rivers, deltas, springs, and movement from inner landscapes to the sea and open spaces, A Fine Passage has as its central element air, wind, planes, music, and voices from around the world, underscoring the ideas of liberty and sensuality that motivate the book.Terry and Carmen fly to France, and Hans criss-crosses the world with his unfinished Bruegel jigsaw puzzles and his diamonds in tow. New characters are introduced: Claudia, a young and wonderfully independent and confident girl who is asked to post a curious letter for a stranger she's met in the airport; the Woman Who Smokes Only in Public and loves a man who throws out his handkerchiefs on Thursdays; the Man Who Didn't Seem to Be Reading and can't decide where to settle down; and a rabbi or pope who shares his wisdom and unique spirituality with his fellow air travellers.

A Fine Passage is the second work in the trilogy which also includes Just Fine and Life's Little Difficulties.

France Daigle is the author of eleven novels, including Real Life, 1953, A Fine Passage, Life’s Little Difficulties, and Just Fine, which won the France Acadie Prize, the Prix Éloize, and the Prix Antonnie-Maillet-Acadie Vie. She lives in Moncton New Brunswick.

Robert Majzels, author of Apikoros Sleuth and City of Forgetting (Mercury), is a Montreal-born prose writer, playwright, translator and teacher; his first novel, Hellman’s Scrapbook (Cormorant), was hailed and acclaimed. His play This Night the Kapo won first prize in the Dorothy Silver Competition and the Canadian Jewish Playwriting Competition. In 1991, his fiction was featured in Coming Attractions (Oberon); his translations include Anne Dandurand’s Small Souls Under Siege (Cormorant) and The Waiting Room (The Mercury Press), and France Daigle’s 1953 (House of Anansi). He has also translated several novels by France Daigle, short stories by Anne Dandurand and, with Erin Mouré, two books of poetry by Nicole Brossard. Robert Majzels lives in Quebec.

Other titles by France Daigle

1953: Chronicle of a Birth Foretold

Chronicle Of A Birth Foretold

Other titles by Robert Majzels

This Night the Kapo