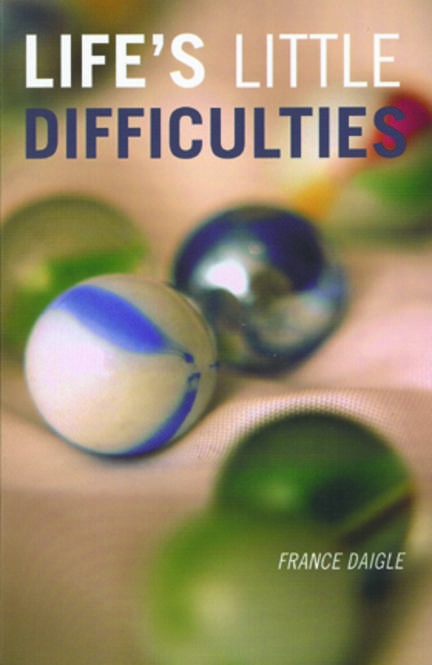 This is the final work in the trilogy begun by Just Fine and A Fine Passage.

Since the birth of their son Etienne, Carmen has been working as a waitress while Terry takes care of the baby. He has also been reading every book he can find about the Yi Jing, and consulting his oracle daily. The arrival of Etienne and Ludmilla Zablonski supplies unexpected and welcome inspiration.

But Terry and Carmen's life together is tinged with anxiety, and important questions about their future arise. "I've decided to love you till the day I die," Terry writes in a note to Carmen -- but is it really possible to decide to love someone?

France Daigle is the author of eleven novels, including Real Life, 1953, A Fine Passage, Life’s Little Difficulties, and Just Fine, which won the France Acadie Prize, the Prix Éloize, and the Prix Antonnie-Maillet-Acadie Vie. She lives in Moncton New Brunswick.

Robert Majzels, author of Apikoros Sleuth and City of Forgetting (Mercury), is a Montreal-born prose writer, playwright, translator and teacher; his first novel, Hellman’s Scrapbook (Cormorant), was hailed and acclaimed. His play This Night the Kapo won first prize in the Dorothy Silver Competition and the Canadian Jewish Playwriting Competition. In 1991, his fiction was featured in Coming Attractions (Oberon); his translations include Anne Dandurand’s Small Souls Under Siege (Cormorant) and The Waiting Room (The Mercury Press), and France Daigle’s 1953 (House of Anansi). He has also translated several novels by France Daigle, short stories by Anne Dandurand and, with Erin Mouré, two books of poetry by Nicole Brossard. Robert Majzels lives in Quebec.

Other titles by France Daigle

1953: Chronicle of a Birth Foretold

Chronicle Of A Birth Foretold

Other titles by Robert Majzels

This Night the Kapo