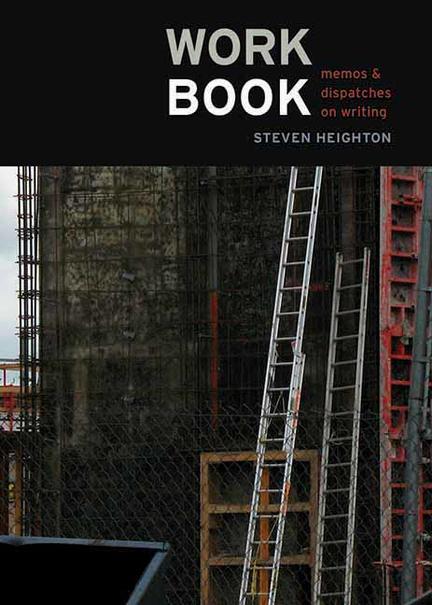 A fresh and provocative picture of what it means to create literature, this collection of Steven Heighton’s notes to himself as he writes peeks into the mind of an acclaimed author. The short pieces reveal Heighton’s pointed, cutting take on his own work and materialize the musings and meditations that come to him as he scribbles. Offering new perspectives and insights into the creative process, this wholly original book shows what lies outside the pages of the bestsellers written by this Canadian author.

Steven Heighton is the author of Afterlands, which was a New York Times Book Review Editors’ Choice, Every Lost Country, Patient Frame, and The Shadow Boxer, which was a Publishers Weekly Book of the year in 2002. He lives in Kingston, Ontario.

I am not bored at the moment, though it might be better if I were. Boredom might mean I was lagging and loafing my way slowly toward a fresh jag of creative work, creative excitement—a poem, a story, the opening lines of a novel, lines that might lead anywhere, into the expectant offing, off the edge of the storyboard into a sandbox as vast as the Sahara. (I chose writing because I saw no reason that adults should ever cease to play.) Instead I‘m expending another day as a compliant, efficient functionary—earnest secretary to my own little career. (If you’ll excuse me, another email just blipped into view. I’m going to have to click and skim over, so I can glean that small, fleeting fix of satisfaction that comes from purging the inbox. A sense of accomplishment!—the ensuing narcotic calm!—that deeply licit, Lutheran drug our time–ridden culture starts pushing on us in kindergarten, or even sooner.)

I’m afraid that boredom, at least of a certain kind, may be disappearing from the world. And this potential truancy has me worried, partly for the sake of my daughter and her generation, but also—how unsurprising—for myself. Myself and other writers. I mean, the minute I get bored now I check my email. There’s often something new there—maybe something rewarding, a note from a friend, some news from my publisher. And if there’s nothing there, there’s the internet. For almost all of my writer friends it’s the same: like me, they constantly, casually lateralize into the digital realm. Some of them also have cable TV (I don’t), so if email, YouTube and other web excursions fail to gratify, they can surf a tsunami of channels. Or else play video games. Whatever. The issue here is screen media. The issue is that staring into space—in that musing, semi–bored state that can precede or help produce creative activity—is impossible when you keep interposing a screen between your seeing mind and the space beyond. The idea is to stare at nothing—to let nothingness permeate your field of vision, so the externally unstimulated mind revs down, begins to brood and muse and dream.

What a live screen presents is the opposite of nothing. The info and interactivity it proffers can be vital, instructive, entertaining, usefully subversive and other good things, but they also keep the mind in a state of hyperstimulation. All the neurological and anecdotal evidence backs up this claim.

The twenty–first century brain may be verging on the neural equivalent of adrenal collapse.

Just as an hour of boredom—of being at loose ends and staring into space—can serve as precursor to a child’s next spate of creative work/play ("work, " I write, because a young child’s profession is to play), so an adult’s month of brooding can open into a year of purposeful creativity.

Boredom is the laboratory where new enthusiasms ready themselves, beakers and test tubes bubbling quietly over Bunsen flames no larger than pilot lights, spectral figures in lab coats moving among them, speaking in hushed voices. Not one of these figures has the bored dreamer’s own face—the face the dreamer wears during the day.

"A truly exceptional novel... Every Lost Country will be cherished for its characters, who are numerous, challenging and deeply alive; for its precise and beautiful Language; and for its ambitious (and successful) effort to grapple with issues that are central to the way we live in a world of ever-increasing moral ambiguity." — The Walrus Blog on Every Lost Country

"These observations are refreshing in their honesty, directness, and humour. Also refreshing is Heighton's refusal to compromise on the discipline required to write and read well." —www.StevenWBeattie.com

"A Lord Jim for the 21st century, but told with the pace of the slickest modern thriller. . . With Every Lost Country , Heighton not only succumbs to the modern taste for non-stop action, he masters it....Fast-paced, clear and hard-hitting....What sets the novel far above the thriller norm is the diversity of the viewpoints it incorporates, blended invisibly into the heart-pounding narrative by means of constant small miracles of characterization....Readers who decide to follow along will experience a fast and often harrowing ride. But be warned: Once embarked, there is no escape." —John Barber, The Globe and Mail on Every Lost Country

"Considering the Subject matter, Every Lost Country is a surprisingly apolitical book. The lost countries of the Title could just as well refer to the yearning for home any individual may suffer as to the circumstances of the Tibetan people. The novel’s strong suit is its characters, and their actions are true to the dictates of their emotions." — The Gazette on Every Lost Country

" Every Lost Country is thrillingly plotted, elegantly detailed, and alive with characters who will seem as real to you as people you’ve known for years and can still talk to for hours on the phone. Heighton sets them down in what is literally the world’s most breathtaking landscape, at the very limits of human physiology, where the compass of moral courage points them into uncharted territory. Read this novel to be transported and enthralled." — Jamie Zeppa, author of Beyond the Sky and the Earth on Every Lost Country

"The writing moves skilfully through a range of registers, from tragic to (darkly) comic, intimate to political. And the magnificent setting is dramatically evoked on a lush canvas.... Every Lost Country has an expansive moral vision wedded to a thrilling plot." — Quill & Quire on Every Lost Country

"Heighton as character, hero of the workbook on writing, exhibits his own contradictions even in this finely pared down work of many years. And it’s a stronger work for it. Of the genre, certainly, one of the better." — National Post

"From the opening pages, you won’t be able to put down Steven Heighton’s Every Lost Country . A dizzying read, it’s one of those rare finds where gorgeously drawn characters and a galloping plot merge effortlessly. Heighton proves himself once again a young lion of Canadian literature." — Joseph Boyden, author of Through Black Spruce on Every Lost Country