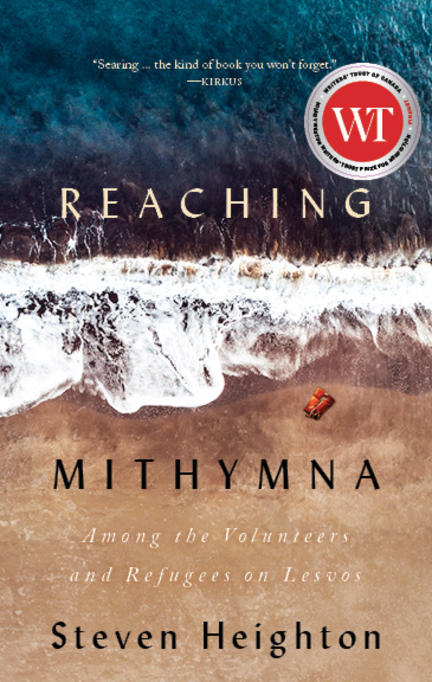 In the fall of 2015, Steven Heighton made an overnight decision to travel to the frontlines of the Syrian refugee crisis in Greece and enlist as a volunteer. He arrived on the isle of Lesvos with a duffel bag and a dubious grasp of Greek, his mother's native tongue, and worked on the landing beaches and in OXY-—a jerrybuilt, ad hoc transit camp providing simple meals, dry clothes, and a brief rest to refugees after their crossing from Turkey. In a town deserted by the tourists that had been its lifeblood, Heighton-—alongside the exhausted locals and under-equipped international aid workers—-found himself thrown into emergency roles for which he was woefully unqualified.

From the brief reprieves of volunteer-refugee soccer matches to the riots of Camp Moria, Reaching Mithymna is a firsthand account of the crisis and an engaged exploration of the borders that divide us and the ties that bind.

Steven Heighton’s most recent books are The Nightingale Won’t Let You Sleep, a novel that has just been optioned for film, and The Waking Comes Late, which received the 2016 Governor General’s Award for Poetry. His work has received four gold National Magazine Awards and has appeared in Granta, Tin House, Zoetrope, London Review of Books, Best American Mystery Stories, Best American Poetry, TLR, and five editions of Best Canadian Stories. His novel Afterlands was cited on year-end lists in the USA, the UK, and Canada, and is in pre-production for film. In 2020 he will publish two books, a nonfiction account of the Middle Eastern refugee influx on Lesvos, Greece, and a children's book drawing on the same events. Heighton is also a translator, an occasional teacher, and a reviewer for the New York Times Book Review.

Excerpt: Reaching Mithymna: Among the Volunteers and Refugees on Lesvos (by (author) Steven Heighton)

The only other person aboard the bus, the driver, shakes me awake. I see myself in duplicate in his aviator shades. “Mithymna?” I ask. He nods.

Mumbling thanks, I pick up my bags and step down onto the hot road. No traffic passing, not a living thing in sight. Is it already the siesta hour?

You’d never know this part of the island was thronged with war refugees and that hundreds, thousands more are arriving daily.

The bus stays put, idling, the driver slumped behind the wheel as if already napping behind his sunglasses. Nothing wants to be awake right now. I’ve barely slept in fifty hours—an overnight flight, a second night on a ferry—and as I close and rub my eyes, a montage of pre-sleep psychedelia starts looping.

Across the road, a town of whitewashed houses with terracotta roofs climbs the face of a high crag topped by a crusader castle. On this side of the road, olive groves fall away downhill to a long rank of cypresses, the sea glistening beyond.

I turn onto a dirt lane and let the slope carry me down through the olive groves past a few shuttered houses, gaping worksheds, a weedy lot where the hulks of cars sit rotting. I pass between two cypresses and here is the seafront, a paved road running north-south along a narrow beach of white sand and pebbles. The shallows look tropically turquoise. Orange buoys bob offshore. The sea smells of kelp and something I can’t place at first . . . associations of fear, distress . . . it’s iodine, the intensely stinging stuff my mother painted onto cuts when I was small.

On the low seawall, beside a pack of Greek cigarettes and a half-empty water bottle, there’s a coil of rope, some barbed steel hooks, and a cookie tin full of chicken feet the raw grey-pink of earthworms. Beyond them sits a white plastic pail. I look inside: a glutinous, translucent mass of octopods, motionless, though they give a faint impression of [trembling].

I follow the paved road south along the beach. There are supposed to be hotels and rooms for rent down here. Off-season now they might be cheap, especially for someone who means to stay for a month. But the small places on either side of this T-junction are boarded up. The buildings to my left—two storey hotels, cafés, clubs—are all shuttered. Would they normally be closed at this time of year or has the refugee influx damaged tourism even more than I’ve heard?

Something odd appears up ahead at the waterline. The sun in my eyes, I squint to focus. It looks like an immense sea animal, beached and decomposing, an elephant seal, a small whale.

I drop my bags and walk diagonally down the beach—a matter of a few steps—and continue along the water. As I approach the carcass I step over an orange life vest half buried in wet sand and realize those buoys offshore must be life vests too. Of course. Now my eyes make sense of the wreckage ahead: a half-deflated dinghy, its black rubber snout aground on the beach, stern wallowing in the shallows.

I find the dinghy’s aft section full of oily water. A red parka floats there, arms outstretched, amid empty water bottles, a plastic diaper and a few banknotes, maybe Syrian.

This vessel is no roomier than a large kiddie pool but will have ferried at least sixty people, reportedly the minimum the human smugglers will squeeze aboard.

I walk further. Another dinghy is half-submerged some distance out and drifting shoreward. On the tideline and in the shallows, more life jackets, water bottles, disposable diapers, a saturated hoodie, an infant soother, cigarette butts.

A map turning to gruel in a plastic sandwich bag.

A tiny shoe with pink laces tied—surprisingly, since the sea is reputed to loosen and unknot everything, gradually undressing the drowned. Then again, any parent who has laced the shoes of a small child knows that you knot them with special care before embarking on a journey.

“The key to the book’s force is Heighton’s imperative to humanize and individualize everyone he encounters, from the volunteers—a ragtag gallery, constantly shifting as people move from one facility or camp to another—to the refugees themselves. There are few, if any, background figures; wherever possible, Heighton provides backstories and close observations of behaviour. These are not statistics but people, each sensitively depicted, captured in moments of extreme stress ... Reaching Mithymna is a stunning book, by turns heartbreaking and affirming, fundamentally human in its depth and scope. That it ends on a note balancing hope with loss, optimism with pain, is characteristic of its grace and power.”—Quill & Quire (starred review)

“We know Steven Heighton as an award-winning poet and novelist. With Reaching Mithymna, he emerges as an indelible nonfiction writer. Combining his poetic sensibilities and storytelling skills with a documentarian’s eye, he has created a wrenching narrative from the front lines of the Syrian refugee crisis. In 2015, Heighton travelled to Greece, his mother’s homeland, equipped with a duffel bag, a notebook, and a conscience. Reaching Mithymna is a heart-rending story of humanity and sacrifice by a writer who put his own life on hold in a desperate and often futile attempt to help shipwrecked strangers find a safe and secure future for themselves and their children.”—2020 Hilary Weston Writers’ Trust Prize for Nonfiction jury (Helen Knott, Sandra Martin, and Ronald Wright)

“Through his example in Reaching Mithymna, Steven Heighton offers us an alternative to armchair activism and outrage. Yes, with guts and compassion, we can step out of our safe, comfortable rooms and make a contribution to the alleviation of suffering. There is a way—regardless of our age, language, status, or abilities—to enter global conflicts responsibly. Heighton relays the horrors of the Syrian refugee crisis with the insight of first-hand experience and the ethics of a conscientious witness. His unforgettable portraits of volunteers and refugees remind us that politics are inextricable from human lives.”—Ian Williams, Scotiabank Giller Prize-winning author of Reproduction

“Deeply personal and tender, Steven Heighton’s Reaching Mithymna never shies away from the self-critique that comes with being a witness to unfathomable human tragedy. There’s a uniquely fragile quality to Heighton’s beautiful narrative prose, one that only comes from an understanding of loss, uprootedness and exile, of what it means to reach out to that which remains elusive. Heighton gives voice to a multitude of colourful yet tragic characters faced with impossible dilemmas and their own shortcomings.”—Yara El-Ghadban, author of I Am Ariel Sharon

“Steven Heighton’s extraordinary book is driven by two inseparable desires: to learn, and to help. First is the writerly needing to know exactly how people manage in a particular time and place. Best go there and find out. Being there you may help. Learning, you will help better. And writing about it later, about the whole mix of those suffering and those seeking to alleviate that suffering, continues the learning because making sentences is a continued thinking, a trying to make sense. What this book teaches in its writing and in its publication is that mutual aid is the condition of our survival.”—David Constantine, author of In Another Country

“Heighton’s searing memoir of embedding among the volunteers … is far more than a traveler’s tale … This is the kind of book you won’t forget.”—Kirkus

“Reaching Mithymna, is an eloquent depiction of refugees, volunteers and a seemingly endless crisis.” —Maclean's

"A meticulous assemblage of vignettes and character sketches in the hands of a masterful storyteller who wears his values on his page."—Broken Pencil

"Heighton’s harrowing and moving book about his time in Greece, with its rich array of characters and finely expressed understanding of the pain of exile, wrenches our gaze back to the refugees and refuses to let go."—Brian Bethune

"As Heighton, by his impromptu arrival, experiences a world crisis unfolding far from his protected home life, so do we through his refreshing style and humble tone."—The Longest Chapter

“[A] brilliant storyteller … [His] exquisite, powerful meditations on who we are place Heighton among the great Canadian writers … His focus is contemporary, but he is a practitioner of the old school, a writer for those who love to read widely and deeply.”—Donna Bailey Nurse, Literary Review of Canada

“In scintillating prose and with masterly control of his plot and characters, poet and novelist Heighton (Afterlands) weaves a spellbinding tale of love, loyalty, and betrayal. This timely (press reports indicate that reunification talks between Greek and Turkish Cypriot leaders are advancing) novel is highly recommended to all readers.”—Edward B. Cone, Library Journal (starred review)

“As this fascinating ... well-plotted novel draws to a tense conclusion, Heighton skillfully knits together the difficult history and politics of the region, military machinations, and the nuanced inner lives and relationships of Elias and the villagers.”—Publishers Weekly

“[An] elegantly crafted tale of a young poet and boxer who fights his way out of the backwoods of Canada, drunk on Kerouac and the unbounded promise of his future. Heighton chronicles [his characters'] growth with impressive restraint and sensitivity… [and] ably captures the emotional costs of a young man's dream.”—Washington Post

“Vivid and powerfully drawn ... The Shadow Boxer is an energetic, fluent and interesting novel by a writer who has already shown himself to be gifted, capable of exploring and experimenting with language.” —Times Literary Supplement