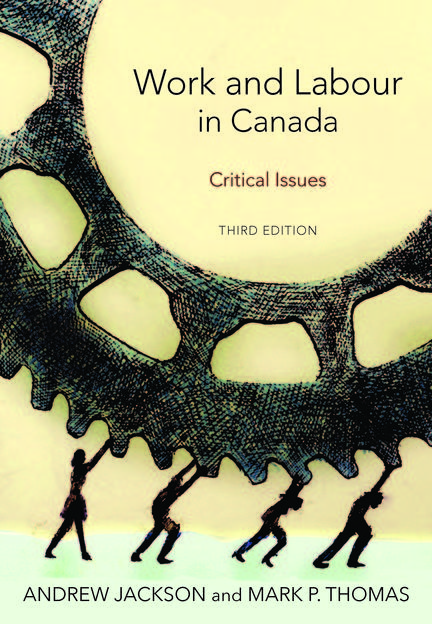 Now in its third edition, Work and Labour in Canada explores critical issues Canadian labourers face on a daily basis, concerning the development of modern capitalist structures, low wages and the increase in unpaid and alienated employment, gendered and racialized divisions of labour, and accessibility in the work environment. Andrew Jackson and Mark P. Thomas draw upon updated statistics, figures, and case studies to identify the economic, social, and political processes that influence contemporary workplace environments and trends, and offer equitable and democratic alternatives to the current organizational structure of the Canadian workforce. This new edition also includes discussions on contemporary workers’ movements and temporary foreign labourer programs. A resource for labour activists and researchers, this text is suitable for upper-level undergraduate courses in sociology of work and labour studies.

Andrew Jackson spent most of his career as Chief Economist and Director of Social and Economic Policy with the Canadian Labour Congress. Since retiring from the CLC in 2012 he has been senior policy adviser to the Broadbent Institute, and spent two years as the Packer Visiting Professor of Social Justice at York University. He is currently an adjunct research professor at Carleton University. He writes a bi-weekly on line column for the Globe and Mail and is the author of numerous articles and several books, including Work and Labour in Canada: Critical Issues which is now in its second edition.

Mark P. Thomas is associate professor in the Department of Sociology, York University, and author of Regulating Flexibility: The Political Economy of Employment Standards.

"Work and Labour in Canada: Critical Issues is the best introduction to the subject that’s available. Mark Thomas has broadened its scope, deepened its analysis, and updated the data it presents. This new edition will be really useful for students and anyone else who wants to understand work in Canada today."— “David Camfield, Labour Studies and Sociology, University of Manitoba

"In this refreshingly updated third edition, Jackson and Thomas tackle both the enduring patterns and the new challenges that shape the experiences of workers in today’s economy. Accessibly written and packed with cutting-edge research on our workplaces, labour markets, and workers’ movements, this book is a must-read for anyone who wants to understand work in the 21st century."— “Stephanie Ross, School of Labour Studies, McMaster University, and President, Canadian Association for Work and Labour Studies

Other titles by Andrew Jackson

The Fire and the Ashes

Work and Labour in Canada

The Multilateral Agreement on Investment (MAI) and Its Impact

Other titles by Mark P. Thomas

The Political Economy of Employment Standards