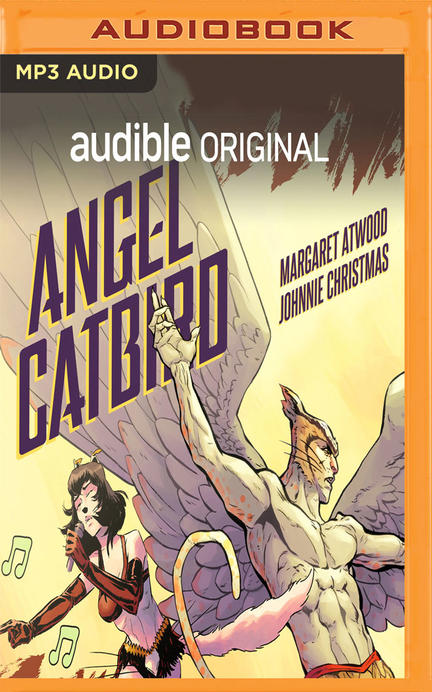 Margaret Atwood, the most prescient and admired author of her generation, presents an original audio adaptation of her latest leap into the comic sci-fi fantasy underground: Angel Catbird.

Atwood wrote this New York Times best-selling fantasy as an homage to the golden age of comic books and the radio hour thrillers she loved as a child - with a little 21st century spice!

Our story: One dark night, young genetic engineer Strig Feleedus is cruelly mutated by his own experiment and merges with the DNA of a pussycat and an owl. What follows is an action-driven, witty, and pulp-inspired all-species revolution. Would you expect anything less?

The television series based on Margaret Atwood's novel The Handmaids' Tale garnered eight Emmys and two Golden Globes. She and her novels have won many literary prizes including the Arthur C. Clarke Award, the Man Booker Prize, the Giller Prize, the Franz Kafka Award, the German Friedenspreis, and a Lifetime Achievement Award from the National Book Critics Circle. Angel Catbird is her first graphic novel and original audiobook adaptation.

Andrew Jackson spent most of his career as Chief Economist and Director of Social and Economic Policy with the Canadian Labour Congress. Since retiring from the CLC in 2012 he has been senior policy adviser to the Broadbent Institute, and spent two years as the Packer Visiting Professor of Social Justice at York University. He is currently an adjunct research professor at Carleton University. He writes a bi-weekly on line column for the Globe and Mail and is the author of numerous articles and several books, including Work and Labour in Canada: Critical Issues which is now in its second edition.

Other titles by Allegra Fulton

Other titles by Christo Graham

The Age of Minority

Other titles by Andrew Jackson

The Fire and the Ashes

Work and Labour in Canada

The Multilateral Agreement on Investment (MAI) and Its Impact