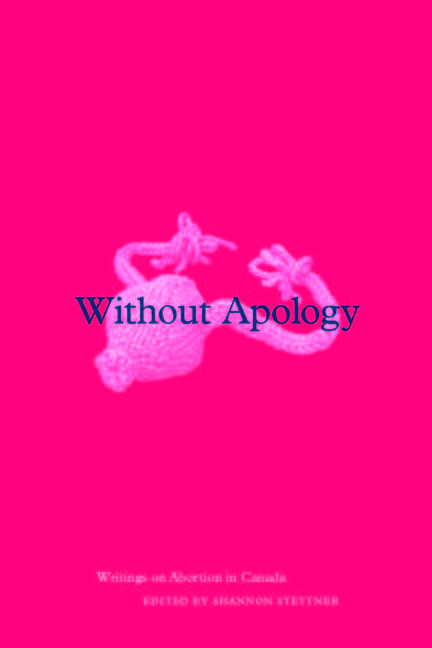 Until the late 1960s, the authorities on abortion were for the most part men—politicians, clergy, lawyers, physicians, all of whom had an interest in regulating women’s bodies. Even today, when we hear women speak publicly about abortion, the voices are usually those of the leaders of women’s and abortion rights organizations, women who hold political office, and, on occasion, female physicians. We also hear quite frequently from spokeswomen for anti-abortion groups. Rarely, however, do we hear the voices of ordinary women—women whose lives have been in some way touched by abortion. Their thoughts typically owe more to human circumstance than to ideology, and without them, we run the risk of thinking and talking about the issue of abortion only in the abstract.

Shannon Stettner teaches in the Women's Studies Department at the University of Waterloo. Her research examines women's Abortion rights activism, reproductive justice, and public opinion on abortion in Canada. She is the editor of Without Apology: Writings on Abortion in Canada (Athabasca University Press), and co-editor of Transcending Borders: Abortion in the Past and Present (Palgrave MacMillan). Her research has appeared in the Canadian Bulletin of Medical History, the Journal of Canadian Studies, and Social History/histoire sociale.

"An excellent example of how Canadian historians can make their scholarship more accessible to a public audience. Stettner's collection shows how the field of women's history can combine scholarly and activist agendas through history. [...] While many of the essays draw on personal and anecdotal evidence, they provide historical insight into how far the pro-choice movement has come in Canada and where it should go next. This book will be useful to academics, women's health practitioners, policymakers, and members of the public who want to understand Canada's abortion debate in the past and in the present."

"Heartbreaking and enraging. . . . A commendable survey of abortion in Canada that gives space to a wide range of voices while also acknowledging the work still to be done."

“Finally, there's a resource that comprehensively and thoroughly explores the history and evolution of reproductive rights in Canada. [...] A great resource for anyone looking for information about the evolution of abortion rights, regulations, and laws in Canada, but also a great read for anyone interested in the role of abortion rights in the history of the feminist movement.”

Other titles by Shannon Stettner