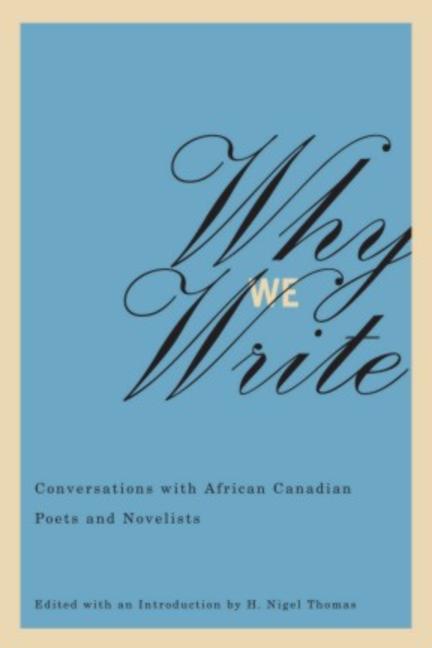 In this volume, African Canadian novelists and poets discuss the complexities of the writing experience. Most of the writers interviewed here are humanists; i.e., they see their work as serious depictions of the human condition, admit that their works are informed by an African Canadian ontology, and adhere to the notion that their books must delight and instruct. These interviews, therefore, are valuable additions to the creative process of the individual writers. Apart from identifying how the writers' geographical and social origins have influenced their work, the questions deliberately avoid autobiography. Instead, these writers respond to the exigencies of craft, the manipulations of publishers, the criticism of readers, and the absence of a clearly identifiable market for their works.

H[ubert] Nigel Thomas grew up in St Vincent and the Grenadines but moved to Montreal in 1968. He is the author of 11 books and dozens of essays. His novels Spirits in the Dark and No Safeguards were shortlisted for the Quebec Writers Federation Hugh MacLennan Fiction Prize. Des vies Cassées (the translation of Lives: Whole and Otherwise) was shortlisted for le Prix Carbet des Lycéens. He holds the 2000 Professional of the Year Jackie Robinson Award, the 2013 Université Laval’s Hommage aux créateurs, and the 2020 Black Theatre Workshop’s Martin Luther King Jr. Achievement Award. The Canadian High Commission to Barbados and the Eastern Caribbean States deems him to be one of Canada’s outstanding immigrants from St Vincent and the Grenadines. His books Behind the Face of Winter and Lives: Whole and Otherwise have been translated into French.

"Indispensable . . . Overall there is a sense in which the writers interviewed in this collection know they are contributing to an absolutely necessary project guaranteed to aid future writers and readers, with its discussions of the political and literary contexts, as well as formal and aesthetic aspects, of current Black Canadian writing." --The University of Toronto Quarterly

Other titles by H. Nigel Thomas

When the Bottom Falls Out

Behind the Face of Winter