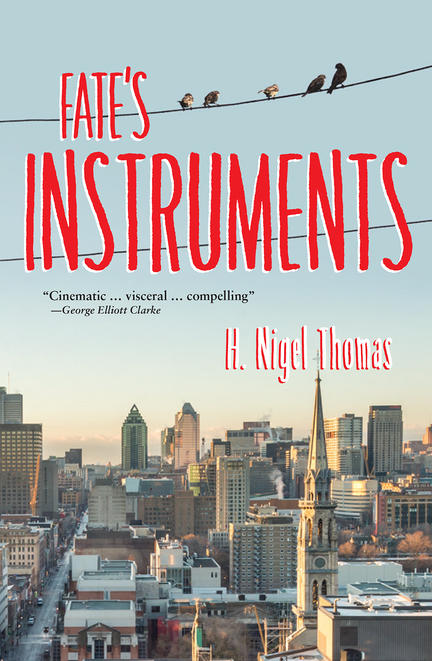 In Fate's Instruments, picking up the story from where Paul's brother Jay left it in No Safeguards, Paul, an aspiring writer, marries Carlos, with whom he lived in Guatemala, and brings him to Montreal. Things go wrong from the beginning, and they break up. Then fate, in the form of a brain tumour, strikes Paul. He receives support from Jay, Lionel (himself a brain tumour survivor), friends, and the enigmatic Professor Bram. But it is Paul's exploration of his Vincentian childhood and new-found love that restores his equilibrium.

H[ubert] Nigel Thomas grew up in St Vincent and the Grenadines but moved to Montreal in 1968. He is the author of 11 books and dozens of essays. His novels Spirits in the Dark and No Safeguards were shortlisted for the Quebec Writers Federation Hugh MacLennan Fiction Prize. Des vies Cassées (the translation of Lives: Whole and Otherwise) was shortlisted for le Prix Carbet des Lycéens. He holds the 2000 Professional of the Year Jackie Robinson Award, the 2013 Université Laval’s Hommage aux créateurs, and the 2020 Black Theatre Workshop’s Martin Luther King Jr. Achievement Award. The Canadian High Commission to Barbados and the Eastern Caribbean States deems him to be one of Canada’s outstanding immigrants from St Vincent and the Grenadines. His books Behind the Face of Winter and Lives: Whole and Otherwise have been translated into French.

Cinematic in its scenes, visceral in its plot, compelling in its characters, this globe-trotting, moveable feast of a novel is a page-turning, savvy, Gothic Romance of the heart. H. Nigel Thomas has crafted a story that odysseys behind the headlines of corruption, bloodshed, and inhumanity, both domestic and abroad, to probe the fantastic insurgency of love in all these circumstances and in all its forms—familial, erotic, transcendental, and wounding, but also healing. Fate’s Instruments will remind you of prose masters such as James Baldwin and Austin C. Clarke. Most urgently it will reacquaint you with—or introduce you to—another and equal master storyteller, namely, H. Nigel Thomas.

Other titles by H. Nigel Thomas

When the Bottom Falls Out

Behind the Face of Winter