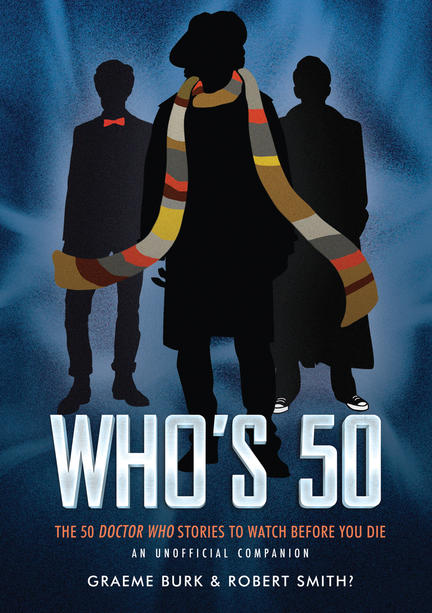 An enthusiastic guided tour through 50 years of Doctor Who

Doctor Who has been a television phenomenon since it began over five decades ago on November 23, 1963. But of all the hundreds of televised stories, which are the ones you must watch? Featuring 50 stories from all eleven Doctors, Who’s 50 is full of behind-the-scenes details, exhilarating moments, connections to Who lore, goofs, interesting trivia, and much, much more. Enthusiastically curated for newcomers and fans alike by Doctor Who experts Graeme Burk and Robert Smith? and released on the fiftieth anniversary of the series premiere, Who’s 50 tells the story of this global sensation: its successes, its tribulations, and its triumphant return.

Without really intending, Robert Smith? appears to have accidentally created the subdiscipline of Mathematical Modelling of Zombies. By day, he’s a professor of biomathematics at the University of Ottawa, studying infectious diseases such as HIV, human papillomavirus and various tropical diseases. By night, he’s a writer, having written or edited Outside In: 160 New Perspectives on 160 Classic Doctor Who Stories by 160 Writers (ATB Publishing, 2012), Who Is The Doctor: The Unofficial Guide to the New Series (ECW Press, 2012), Braaaiiinnnsss: From Academics to Zombies (UOP, 2011), and Modelling Disease Ecology with Mathematics (American Institute of Mathematics Sciences, 2008).

“This book’s full of intriguing, well-argued opinions and it’s a delight to wallow in them. This is strongest when the authors are going against received wisdom or disagreeing with each other...It’s a hugely successful book of which I’m sure the authors are rightly proud and I hope it sells like hot cakes.” — Finn Clark’s Reviews

“We have traditionally adored the books from Burk and Smith, and in reality this one is no different... Who’s 50 gets a solid and very respectable 4 out of 5 so put it on your list of books to grab as you celebrate the 50th anniversary of the Doctor’s travels through time and space.” — C.W. Buechler

“Who’s 50 is like being thrown the keys to the TARDIS with a temporal map to visit all those not-to-be-missed adventures in time and space.” —Phil Ford, Doctor Who writer and executive producer of The Sarah Jane Adventures and Wizards Vs. Aliens

Other titles by Graeme Burk

Other titles by Robert Smith?

From Academics to Zombies