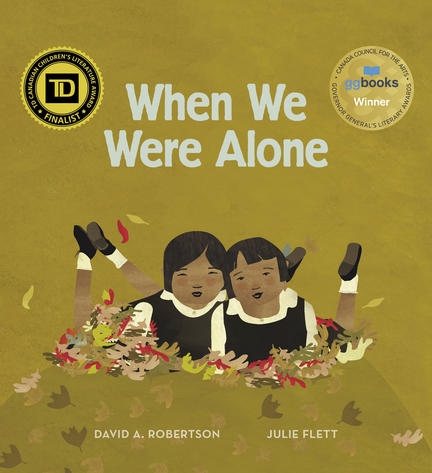 When a young girl helps tend to her grandmother’s garden, she begins to notice things that make her curious. Why does her grandmother have long, braided hair and beautifully coloured clothing? Why does she speak another language and spend so much time with her family? As she asks her grandmother about these things, she is told about life in a residential school a long time ago, where all of these things were taken away. When We Were Alone is a story about a difficult time in history, and, ultimately, one of empowerment and strength.

When We Were Alone won the 2017 Governor General's Literary Award in the Young People's Literature (Illustrated Books) category, and was nominated for the TD Canadian's Children's Literature Award.

DAVID A. ROBERTSON is the winner of the Beatrice Mosionier Aboriginal Writer of the Year Award, the John Hirsch Award for Most Promising Manitoba Writer and the TWUC Freedom to Read Award. His books include The Barren Grounds: The Misewa Saga; When We Were Alone (winner of the Governor General’s Award, a finalist for the TD Canadian Children’s Literature Award and a McNally Robinson Best Book for Young People); Will I See? (winner of the Manuela Dias Book Design and Illustration Award, graphic novel category); and the YA novel Strangers (recipient of the Michael Van Rooy Award for Genre Fiction). He is the creator and host of the podcast Kiwew. Through his writings about Canada’s Indigenous peoples, Robertson educates as well as entertains, reflecting Indigenous cultures, histories and communities while illuminating many contemporary issues. David A. Robertson is a member of Norway House Cree Nation. He lives in Winnipeg.

When We Were Alone is rare. It is exquisite and stunning, for the power conveyed by the words Robertson wrote, and for the illustrations that Flett created. I highly recommend it.

Robertson's text moves between the present and the past, the girl's questions and Nókom's memories, which deepen and intensify the quiet, powerful way she lives out her own culture, day by day, in the present. A beautifully rendered story of resisitance and love, this is made all the more luminous by Flett's art - not just by flashes of fuschsia or scarlet among ochre grasses, but by her precisely observed images of the compact bodies of the uniformed children, bowed beneath the weight of the scissors, or lovingly tending each other's hair. Highly recommended.

Robertson’s soft rhythmic text and Julie Flett’s simple, yet expressive, illustrations combine to create a beautiful story of strength and resistance. The muted colours used in the pictures of residential school life remind readers of the suffering endured by Indigenous children. The contrast between these pages, and the vibrant greens, reds, and blues of the illustrations depicting residential school students temporarily escaping into nature, is heartbreakingly effective. Robertson never tries to disguise the underlying tragedy of Nókom’s experience, but together he and Flett have crafted a book that is still suitable for younger readers, in spite of the intense subject matter.

When We Were Alone is an incredible work of art and is very highly recommended.

…Robertson handles a delicate task here admirably well: explaining residential schools, that shameful legacy, and making them understandable to small children. It’s a dark history, and the author doesn’t disguise that, but he wisely focuses the grandmother’s tale on how, season by season, the students use creativity, imagination, and patience to retain their sense of identity. A beautifully quiet, bold strength arises from the continued refrain “When we were alone” and in how the children insisted on being themselves. Flett’s gorgeous, skillful illustrations have a flattened, faux naïve feel to them, like construction paper collage, a style that works perfectly with the story. She nicely contrasts the school’s dull browns and grays with the riotous colors surrounding Nókom and gets much expression from her simple silhouettes.

Other titles by David A. Robertson

by (author) David A. Robertson
illustrated by Scott B. Henderson & Donovan Yaciuk

by (author) David A. Robertson
illustrated by Scott B. Henderson & Donovan Yaciuk
foreword by Murray Sinclair
afterword by Betty Ross

by (author) David A. Robertson
illustrated by Scott B. Henderson & Donovan Yaciuk

The Misewa Saga, Book One

We Sang You Home

Seeds of a Story: Part 2