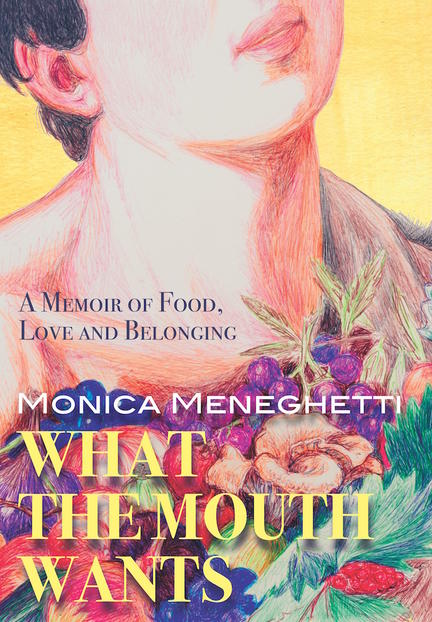 This mouthwatering, intimate, and sensual memoir traces Monica Meneghetti’s unique life journey through her relationship with food, family and love. As the youngest child of a traditional Italian-Catholic immigrant family, Monica learns the intimacy of the dinner table and the ritual of meals, along with the requirements of conformity both at the table and in life. Monica is thirteen when her mother is diagnosed with breast cancer and undergoes a mastectomy. When her mother dies three years later, Monica considers the existence of her own breasts and her emerging sexuality in the context of grief and the disintegration of her sense of family.

As Monica becomes an adult, she discovers a part of her self that rebels against the rigours of her traditional upbringing. And as the layers of her sexuality are revealed she begins to understand that like herbs infusing a sauce with flavour, her differences add a delicious complexity to her life.

But in coming to terms with her place in the margins of the margins, Monica must also face the challenge of coming out while living in a small town, years before same-sex marriage and amendments to the Charter of Rights and Freedoms created safer spaces for queers. Through risk, courage, and heartbreak, she ultimately redefines and recreates family and identity according to her own alternative vision.

Monica Meneghetti is a white European settler and child of Italian immigrants, born in the region of Treaty 7 (Calgary, Canada.) Her first book, What the Mouth Wants: A Memoir of Food, Love and Belonging (Dagger Editions) was a Lambda Literary Award finalist and Bi Book Award winner. Edmonton Journal’s Liane Faulder proclaimed it “deeply erotic and decidedly queer”. What the Mouth Wants is included in American Library Association’s Over the Rainbow’s 2018 Recommended Book List; Autostraddle’s 8 Soft Femme Memoirs; CBC Books’ Must-reads of 2017, and 14 Books to Read for Pride. Queer Songbook Orchestra included her Bowie memoir in their Fall 2018 cross-Canada tour. Her essay about being a queer child of immigrants is found in The Globe and Mail. Her work has been anthologized in Absent Mothers (Demeter Press), Sustenance: Writers from BC and Beyond on the Subject of Food (Anvil Press), and Love Me True: Writers Reflect on the Ins, Outs, Ups and Downs of Marriage (Caitlin Press). Her literary translation from Italian, The Call of the Ice: Climbing 8000-meter Peaks in Winter (Mountaineers Books) was a Banff Mountain Book Award finalist. Her poetry, fiction and nonfiction appear in print, online, in musical scores, and on stage. Nominated for Bi Writer of the Year, Monica defines bisexual as loving her own and other genders.

"What the Mouth Wants expresses with eloquent candor that while there are boundaries and behaviors to challenge, others of flesh and blood are sometimes best left alone."

Other titles by Monica Meneghetti