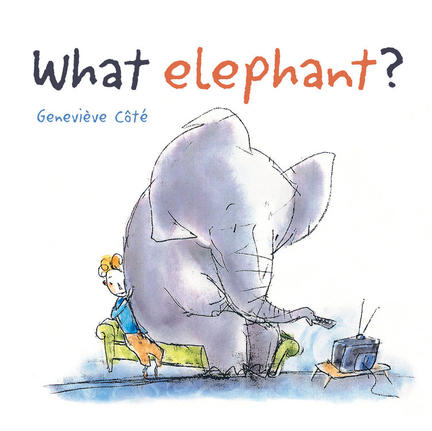 George comes home one day to find an elephant watching TV and eating chocolate chip cookies in his living room. When he tells his friends, they say it's impossible: George must be seeing things. But the next day, and the day after that, his large and uninvited guest remains and makes itself even more at home --- with disastrous results. (Elephants should NEVER sit on couches.) Is George dreaming or just plain crazy?

Before long, his friends see the elephant as well. Or do they? SURELY they too aren't going crazy like poor George? So no one says a single word about the gigantic creature lounging in the flowerbed ... until something happens that finally breaks this very awkward silence.

With delightful text and charming illustrations, Geneviève Côté tells the silly and whimsical tale of an elephant that is seen ... but is not necessarily believed!

Geneviève Côté
studied art and graphic design at Concordia University in Montreal. She has
illustrated numerous books for children. She also enjoys writing her own
stories: Quel éléphant? (What Elephant?) and Je suis là, petit Lundi (With You Always, Little Monday)
were the first books that she both wrote and illustrated. Côté's editorial
art has appeared in The New York Times, The Wall Street Journal, The Boston Globe and other
publications. Her books have received three nominations for the Governor
General's Award for Illustration, one of which she went on to win. She has
also won the Elizabeth Mrazik-Cleaver Award.

Côté's gentle message is put across with appealing wit.

This thoughtful allegory can be an excellent starting point for discussions of fact versus fiction, faith and trust, and self-confidence versus peer pressure.

(Author, Genevieve Cote) causes readers to fall in love with the oversized intruder even though it wreaks domestic havoc and exhibits questionable houseguest behaviour.

Seeing is believing until you discover an uninvited elephant in your abode. When George is faced with this most absurd quandary, he seeks guidance. His pal, Pip, believes the animal is a mere figment of George’s imagination until he spies it himself. Their friend, Maggie, and others can also see it but do not admit this for fear of being perceived as peculiar. George is relieved when the pachyderm is reunited with her owner and returned home.

What Elephant? is the first book which the artist has both penned and illustrated. The story contains notably more text than the average picture book which means that there’s sufficient detail and depth here to interest students slightly older than Grade 1. The book’s mixed media artwork works on two levels. Firstly, Geneviève Côté succeeds in making a large animal appear cute and affable. Secondly, she causes readers to fall in love with the oversized intruder even though it wreaks domestic havoc and exhibits questionable houseguest behaviour. This book and Sharon, Lois, and Bram’s song “Don’t Bring An Elephant (To A Family Meal)” would make enjoyable and entertaining inclusions for a storytime theme on elephants.

Other titles by Genevieve Cote