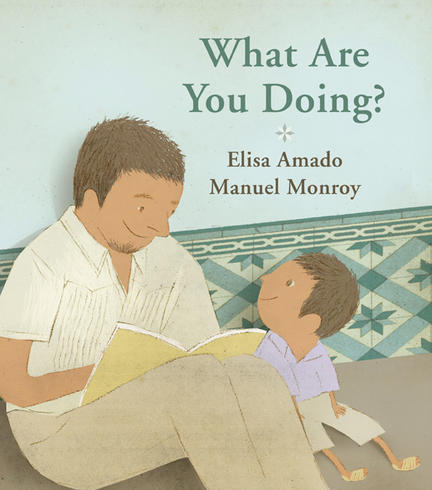 It's the first day of school, but before he goes Chepito runs outside to play. He comes across all kinds of people in his neighborhood -- a man reading a newspaper, a young girl enjoying a comic, a couple of tourists consulting a guidebook, an archeologist studying hieroglyphics . . .

"Why, why, why?" he sings, and they each have an answer for him. Later that day Chepito discovers for himself that reading is catching, and he even brings home a book to read to his younger sister.

Set in a delightfully retro world by illustrator Manuel Monroy, this book is a true celebration of reading.

Manuel Monroy is one of Mexico’s most accomplished illustrators whose work has appeared in children’s books, in magazines, on posters, and most recently in animation projects. He has won many awards, including the A la Orilla del Viento prize, given by the Fondo de Cultura Economica; the Noma Concours in Japan; a Gold World Medal for Art Direction at the New York Film Festival, and a Merit Mention from the Society of Publication Designers. His work has also been included on the IBBY Honour List and in the White Ravens catalogue. Manuel has illustrated many children’s books, which have been published in Canada and the United States, such as Daybreak, Nightfall (Alba y ocaso) and Rooster Gallo, both by poet Jorge Luján; When I Was a Boy Neruda Called Me Policarpo by Poli Delano; and What Are You Doing? by Elisa Amado. He has also exhibited his art in Mexico, Cuba, the Czech Republic, Italy, Japan and the Netherlands. He lives in Mexico City.

a book that should find a place of importance in school classrooms, home libraries and on your gift list for little ones.

... this book charmed me utterly.

...captures the celebration of the printed page as seen through the eyes of a child who has just awakened to its magical possibilities.

...captures some of the initial excitement of emergent literacy against a setting too-little seen in North American children's books.

This is learning by chatting, in a society in which strangers are not dangers but fascinating resources and friends.

...a thoughtful offering for soon-to-be literates that just may get them thinking about the power of reading.

What Are You Doing?

It is the first day of school for little Chepito, but he does not want to attend. Instead, he runs outside to play and meets a variety of people in his neighbourhood who have one thing in common: they are all reading. His question “What are you doing?” provokes an array of responses. A man is scanning a newspaper for sports scores. A young girl is amused by the comics. Two tourists refer to a guidebook. An auto mechanic consults a car manual. A woman peruses a magazine for hairstyle inspirations, and an archeologist studies hieroglyphics to learn more about the past. Chepito is given much food for thought and returns home ready to set off for school. When he peers into his new classroom, it is the sight of a shelf of books which provides the impetus for him to enter. At the conclusion of his first school day, Chepito runs home and pulls out the book his teacher introduced to him. When his mother asks if he learned how to read, he responds, “No, but I can tell by the pictures,” and he proceeds to “read” the book to his little sister. Our young learner understands the value of the written word, and, in turn, wishes to share this gift.

Elisa Amado has composed a charming story about one boy’s initiation into the joys and benefits of reading and his growing desire to become literate. One feels that his world is about to be enlarged broadly as a result of his discovery.

Manuel Monroy’s child-like coloured pencil, watercolour and digital illustrations invite us into Chepito’s friendly home and community. This story takes place in Mexico, yet boys and girls just about anywhere will have experienced a similar introduction to the wonders of reading as Chepito has. What Are You Doing? captures the celebration of the printed page as seen through the eyes of a child who has just awakened to its magical possibilities.

Other titles by Elisa Amado

My Uncle Is Coming Tomorrow

A Small History of a Disagreement

When My Dad Went to the Jungle

Other titles by Manuel Monroy

Caravan to the North

Why Are You Doing That?