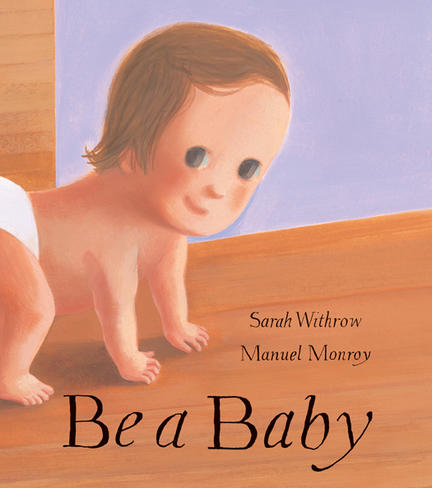 Babies love books about babies. As every parent knows they will spend hours looking at images of creatures like themselves. In this book they will find a most delightful and enchanting baby with whom they can identify whether they are happy, sad, crying or sleepy.

Parents love books that they can read over and over because the language in them is so beautiful. They will be as delighted as their babies by Sarah Withrow's perfect rhyming lullaby.

Manuel Monroy's illustrations depict the state of babyhood at its most appealing and charming -- his baby is positively cuddly.

Sarah Withrow is the author of What Gloria Wants, The Black Sunshine of Goody Pryne, Box Girl and Bat Summer, which was shortlisted for a Governor General's Award and has been published in seven countries. She also writes short stories for adults, which have been published in The Fiddlehead Review, The Malahat Review, The New Quarterly and Descant. Sarah lives in Kingston, Ontario.

Manuel Monroy is one of Mexico’s most accomplished illustrators whose work has appeared in children’s books, in magazines, on posters, and most recently in animation projects. He has won many awards, including the A la Orilla del Viento prize, given by the Fondo de Cultura Economica; the Noma Concours in Japan; a Gold World Medal for Art Direction at the New York Film Festival, and a Merit Mention from the Society of Publication Designers. His work has also been included on the IBBY Honour List and in the White Ravens catalogue. Manuel has illustrated many children’s books, which have been published in Canada and the United States, such as Daybreak, Nightfall (Alba y ocaso) and Rooster Gallo, both by poet Jorge Luján; When I Was a Boy Neruda Called Me Policarpo by Poli Delano; and What Are You Doing? by Elisa Amado. He has also exhibited his art in Mexico, Cuba, the Czech Republic, Italy, Japan and the Netherlands. He lives in Mexico City.

Be a Baby is a lullaby in print...the sort of book that calls out to be read over and over as part of the bed-time routine for a sleepy toddler.

...quite beautiful...babies really do love books about babies. Parents will get equal pleasure from this enchanting book for its emotional honesty, sweetly stylish artwork, and the buoyant cadence of Withrow's loving poetry.

...a lullaby, an enchanting one...just the thing to croon into a baby's ear, and it's a book that will gladden the heart and eye of the reader as well as the baby to whom it is read, said or sung.

Yellow Moon, Apple Moon lulls one to sleep with simple rhyming words and warm swirling illustrations. Like the classic Goodnight Moon, this gentle picture book revolves around a little baby preparing for bed, saying goodnight to all her favourite things.

This lullaby verse is the latest from the talented Pamela Porter. Her verse novel, The Crazy Man, won the 2005 Governor General’s Literary Award. Porter was born in Albuquerque, New Mexico, immigrating to Canada with her family. In Yellow Moon, Apple Moon, Porter revisits these roots integrating a New Mexican lullaby “At the Gate of Heaven” into her original lullaby. The complete lyrics and music for “At the Gate of Heaven” appear at the end of the book.

The illustrations are delicious, rendered in acrylic and India ink on panel. This is painter and musician Matt James’s first book. The thick acrylic paint gives weight and warmth to every page. Within the thick blocks of colour, details are delicately integrated. Bright yellow end pages decorated with children with wings refer to “At the Gate of Heaven.” The child’s favourite things – her tree and house – are decorated with smiling faces. I especially enjoy how the illustrations depict Mommy’s dream of seeing her child sleeping, and the enchanting transformation of the moon into a giant apple.

Yellow Moon, Apple Moon, / Time to sleep. See you soon. Who wouldn’t want to imagine the moon as an apple, much sweeter than a round roll of cheese? Surely this highly recommended nighttime read will send many babes to sweet apple dreams.

Other titles by Sarah Withrow

The Black Sunshine of Goody Pryne

Other titles by Manuel Monroy

Caravan to the North

Why Are You Doing That?

What Are You Doing?