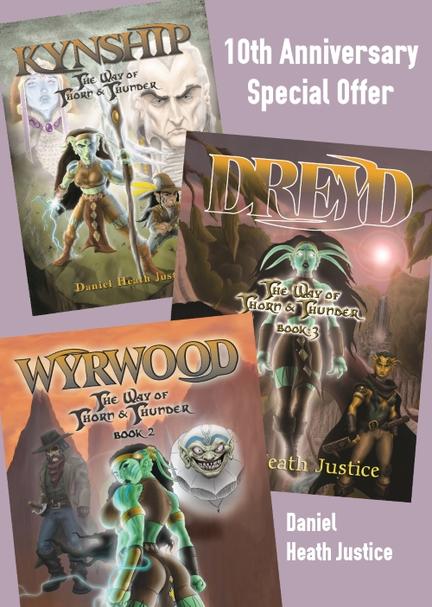 The Way of Thorn and Thunder series celebrates its 10th anniversary with a special deal on a three-volume set. Pursue the epic adventure found in Kynship, Wyrwood and Dreyd: heroic fantasy tales based on Indigenous wisdom. The Everland has been home of the forest-dwelling Kyn and the other Eld-Folk since time immemorial, a deep green world of ancient mystery and sacred shadow. The wyr-powers of the Kyn and their kith have preserved this lush region from the ravenous greed of Humanity for over a thousand years, since the catastrophic Melding that merged their world with the mortal world of Men, but those powers are now under siege, for the assimilationist Kyn Shields seek to purge their people of the wyr, seeing only savagery in its mysteries and in its guardians, the Wielders. As the power of the Shields grows--and as the hungry eyes of Men turn once more to the Everland and its rich bounty--the leaders of the seven nations of the Folk gather together to seek a way of surviving the growing storm.Born into a town dominated by the Shield creeds, Tarsa'deshae, a headstrong Kyn warrior, awakens to the long-suppressed wyr-ways after an act of courage goes horribly awry. Exiled from Red Cedar Town, and struggling to understand her new calling as a Wielder, Tarsa is swept into a dangerous world of political and spiritual struggle, where the old wyr-ways of the Greenwalkers clash with the fragmenting intrigues of the "civilized" Shields and their allies. As the Everland is torn apart by treachery and the ever-encroaching threat of Humanity, the Redthorn Wielder and her companions fight both flesh and spirit to heal their wounded world.Never since the Melding have the Folk faced such danger. Will their roots hold fast, or will they be lost upon the storm?

Daniel Heath Justice (Cherokee Nation) is Canada Research Chair in Indigenous Literature and Expressive Culture and Chair of the First Nations Studies Program at the University of British Columbia, unceded Musqueam territory. His previous publications include a study of Cherokee literature, Our Fire Survives the Storm: A Cherokee Literary History, and The Way of Thorn and Thunder series from Kegedonce Press (omnibus edition from the University of New Mexico Press). His most recent publications are Badger, part of the Animal Series from Reaktion Books (UK), and the co-edited Oxford Handbook of Indigenous American Literature. Current works include the literary manifesto, Why Indigenous Literature Matters (forthcoming from Wilfrid Laurier University Press), a study of other-than-human kinship in Indigenous literary expression, and a new dark fantasy trilogy.

Come on a journey of ancient worlds, mysterious creatures, warriors and primeval tales told through remarkable images and fantasy-driven dialogue. Think of it as Lord of the Rings set in the culture and wisdom of Aboriginal society in North America...Published by Kegedonce Press, this fantasy epic could have been written by J.R.R. Tolkien - if he was Indian. - SPIRIT MAGAZINE, Autumn 2005I recommend it to readers who like their good and evil well defined but human enough to entertain, and all who have longed to cheer for nature and the bonds of community in the struggle against an alienating and avaricious lust for progress that is really all about amassing power. The sensory stalks of the 3-gendered kin, interspersed histories of the gods, many races of unhumans, charming illustrations of the characters throughout the book, unexpected connections between characters, handy glossary and many other details and touches contribute to the story's richness and originality. - LYNDA WILLIAMS, SF author of "The Courtesan Prince"

Other titles by Daniel Heath Justice

A Collection of Two-Spirit Literature