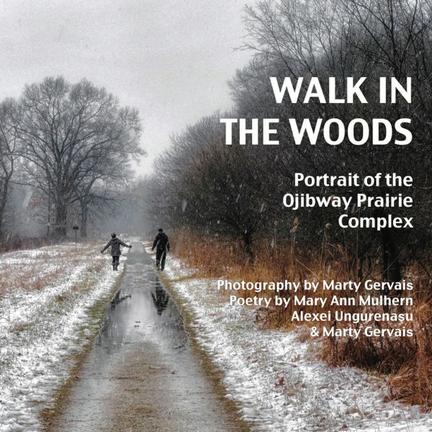 Coming March 2022!Walk in the Woods is an adventure about going out on the best and the worst days of the year and taking a walk in the jigsaw puzzle of the wetlands, forest, savannah, and prairie areas that hug the near edges of Windsor, Ontario. It's a place that some older residents still call Yawkey Bush. It's a gem that caught the attention of the legendary environmental activist David Suzuki who said Ojibway was a ""priceless ... tiny pocket of nature that reminds us, perhaps, of what once was and what could be ..."" With that in mind, Marty Gervais, Windsor's poet laureate emeritus, explores this ""tiny pocket"" and spent most of the Covid—19 pandemic walking and carrying a camera nearly every day into the far reaches of Ojibway, Black Oak, the Tall Grass and Ojibway Shores. His photographs are a diary of that journey. Gervais also teamed up with Windsor's Poet Laureate Mary Ann Mulhern, and city's Youth Poet Laureate Alexei Ungurenasu to celebrate this rich environmental treasure in southwestern Ontario.
I ventured out daily, marvelling at a world I had never really known. I carried a camera. I photographed and documented what I was experiencing. Mostly, I walked alone. I went out when it was misty, overcast, and when it was sunny, and I never missed a snowy day ... It was a walk of meditation, reflection, gratitude, and it was a walk about learning what I was seeing... — Marty Gervais

Mary Ann Mulhern began writing poetry in 2001 during a summer writing seminar conducted by John B. Lee at the University of Windsor. In September of 2001, she won first prize in the Freedom Festival Poetry Contest, with her poem about Harriet Tubman, entitled, Freedom's Rail. Marty Gervais, publisher of Black Moss Press, noticed her success and began a mentoring program with her that October. As Mulhern had been in a convent for eight years in the sixties, Gervais asked her to write about her experience. From this came her first book of narrative poetry, The Red Dress, published by Black Moss Press, 2003. The Red Dress received national attention through an interview on Tapestry, CBC radio, with host, Mary Hynes. Another life—experience which she was encouraged to write about was growing up in a "cemetery house," located at the edge of a cemetery in St. Thomas, Ontario, where her father, Patrick was grave—digger and caretaker. This resulted in Touch the Dead, published Black Moss Press, 2006. Touch the Dead was short—listed for the Acorn—Plantos Award in 2007. Mulhern was asked by Marty Gervais to research and write about the Father Charles Sylvester priest sexual—abuse case which was successfully prosecuted by crown attorney, Paul Bailey at the Chatham Court House. Her book When Angels Weep was born out of this research. In 2010, Mulhern published the sequel to The Red Dress entitled Brides in Black. A new collection of poetry titled All the Words Between by Mary Ann Mulhern will be launched on April 4th, 2018 at the Fogolar Furlan in Windsor, Ontario.

Marty Gervais was appointed Windsor's first Poet Laureate in 2011. Gervais has written more than a dozen books of poetry, as well as two plays and a novel. He is an award—winning journalist, poet, photographer and editor. In 1998, he won Toronto's prestigious Harbourfront Festival Prize for his contributions to Canadian letters and to emerging writers. He has won more than two dozen journalism awards for his work with the Windsor Star where he was best known for his "My Town" column. As a poet, Gervais was awarded the Milton Acorn People's Poetry Award in 1996 for his book Tearing Into A Summer Day. That same book was also awarded the City of Windsor Mayor's Award for literature. Gervais won the same award again in 2003 for To Be Now: Selected Poems. He received the Queen's Jubilee Medal in 2012.

Other titles by Mary Ann Mulhern

All the Words Between

Other titles by Marty Gervais

and Other Forgotten Stories of Windsor

Afternoons with the Devil

Show of Hands, A

Boxing on the Border