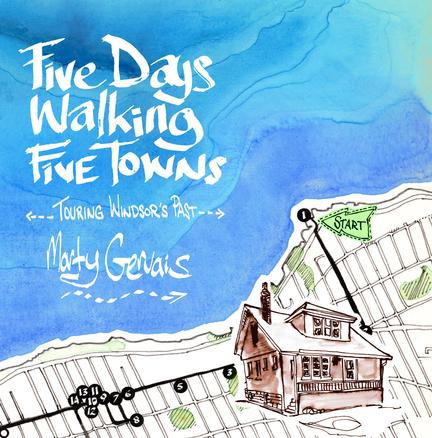 The Canadian border city facing Detroit was not always simply “Windsor, Ontario”—it was a patchwork of multiple communities that amalgamated into Windsor throughout the 20th Century. In Five Days Walking Five Towns, fabled local raconteur Marty Gervais puts on his boots and takes the reader on a street-by-street walking tour through Riverside, Ford City, Walkerville, Windsor, and Sandwich—weaving together his own memories with the booms and busts of his eclectic, storied city. Along the way, tales of Indigenous curses, rum-running, union-busting, and murderous ministers abound.

With intimate, conversational prose and an acute eye for lore that time forgot, Marty Gervais has created a work not just for Ontario history buffs but for anybody who cares about the evolution of cities and the strange, beautiful people who inhabit them.

Marty Gervais was appointed Windsor's first Poet Laureate in 2011. Gervais has written more than a dozen books of poetry, as well as two plays and a novel. He is an award—winning journalist, poet, photographer and editor. In 1998, he won Toronto's prestigious Harbourfront Festival Prize for his contributions to Canadian letters and to emerging writers. He has won more than two dozen journalism awards for his work with the Windsor Star where he was best known for his "My Town" column. As a poet, Gervais was awarded the Milton Acorn People's Poetry Award in 1996 for his book Tearing Into A Summer Day. That same book was also awarded the City of Windsor Mayor's Award for literature. Gervais won the same award again in 2003 for To Be Now: Selected Poems. He received the Queen's Jubilee Medal in 2012.

Other titles by Marty Gervais

Walk in the Woods

Portrait of the Ojibway Prairie Complex

and Other Forgotten Stories of Windsor

Afternoons with the Devil

Show of Hands, A

Boxing on the Border