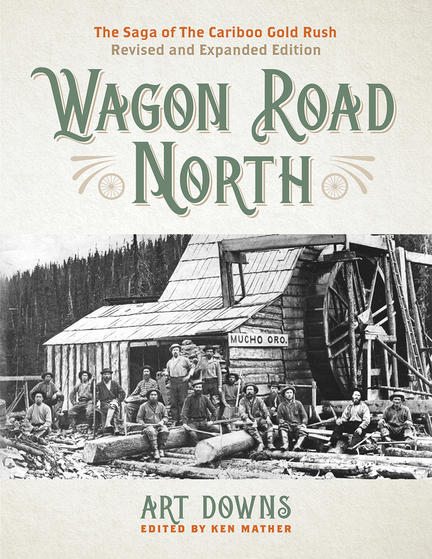 A newly revised and updated edition of the classic pictorial account of the Cariboo Gold Rush trail.

First published in 1960, Wagon Road North is the quintessential popular history book chronicling gold-rush-era BC. Focusing on the Cariboo Wagon Road—the crucial transportation route stretching from Fort Yale to Barkerville that made it possible for tens of thousands of prospectors to make their way to the Cariboo goldfields in the 1860s—this newly updated, expanded, and re-designed edition brings to life the adventures, hardships, and blind ambitions of the men and women who risked everything in the quest for gold. Packed with more than one hundred archival photos, many of them rarely seen, as well as maps and contemporary images of historical sites, this fascinating book is a visual celebration of a pivotal chapter in early BC history.

Art Downs, once described as "the first of the environmental editors," became one of the forefathers of the B.C. publishing industry.

Arthur George Downs was born in 1924 in England and emigrated with his parents at age five. They settled in northeastern Saskatchewan, where he grew up during the Depression. “I attended a typical one-room rural school," he recalled, "with a frustrated teacher attempting to teach grades 1-8 to some 50 impoverished farm boys and girls." His father joined the Canadian Navy during the Second World War and the family came to the west coast. In 1943, Downs joined the merchant navy and worked for seven years, mainly as a radio officer. Unable to pursue his hopes of becoming a reporter due to his lack of experience, he returned to help operate his father's ranch in the Quesnel River Valley in the Cariboo. "Our ranch was the same as about 90 percent of Cariboo ranches," he said. "The owner needed an outside job to support the operation. I reluctantly abandoned ranching but left with a double legacy—the knack of stilling a potent beverage christened 'Quesnel River Screech' and an incurable malady known as Caribooitis. The most noticeable symptom of the latter affliction is an unsettled feeling when the victim is anywhere else except the Cariboo."

His first published story, “The Saga of the Upper Fraser Sternwheelers,” appeared in 1950 in the Cariboo Digest, a regional magazine published in Quesnel since 1945. With Wes Logan, he bought the Cariboo Digest from Alex Sahonovich in 1955 and became its editor. It evolved into BC Outdoors, a successful blend of history, wildlife and conservation that served a broad readership. He didn't believe in fishing derbies or trophies, but he recognized the importance of tourism. He deplored clear-cut logging and was a tireless conservationist and grassroots organizer. Selling BC Outdoors in 1979, he and his wife Doris turned to publishing books by BC writers and for BC readers under the name Heritage House. Downs eschewed the city and affected a down-to-earth bluntness that disguised his sophistication. Along the way he served as president of the BC Wildlife Federation, director of the Canadian Wildlife Federation and a member of the Pacific Salmon Commission. He died at his home in Surrey on August 13, 1996.

Ken Mather has been involved in researching, writing and interpreting western Canadian heritage for nearly four decades. He started out as a researcher for Fort Edmonton Park in 1973. In 1979, Ken moved to BC to work at Barkerville Historic Park; he became the park's curator in 1982. From 1984 until 2004 he was the manager/curator of the historic O'Keefe Ranch near Vernon, BC, where he developed his love of early cowboy history. Ken continues as the curator at the O'Keefe Ranch and lives with his wife, Debbie, near Armstrong, BC.

"The book is as informative today as it was six decades ago—especially with Mather’s additions."
—British Columbia Magazine

"Updating a classic work is a tricky and dangerous business, but Mather has succeeded admirably here. ... Mather’s updates will help ensure that Wagon Road North remains a mainstay for years to come." —BC Studies

Other titles by Art Downs

The Law and the Lawless

The Stampede that Made BC

The Death of Albert Johnson

Other titles by Ken Mather

A History of Barnard's Express

Stories from the Frontier

The Life, Loves, and Legacy of an Okanagan Rancher

Frontier Cowboys and the Great Divide

Early Ranching in BC and Alberta

Ranching in the West in the Early 20th Century

The Early Days of Ranching in British Columbia