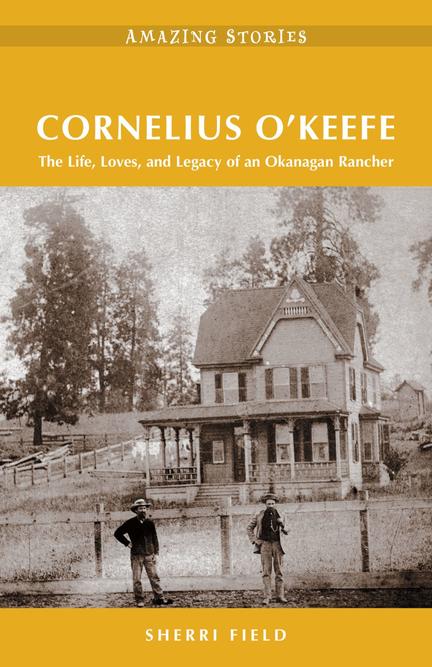 From humble beginnings to a life of prosperity in the heart of the Okanagan Valley, Cornelius O’Keefe is best known today through the historic ranch in Vernon, BC, that still bears his name. Established in 1867, the O’Keefe Ranch was at one time the largest cattle ranch in the region, with thousands of head of cattle grazing in the vast open ranges. By the early 1900s, the ranch had grown to over 12,000 acres, and Cornelius O’Keefe had built quite a legacy for himself. Known as a tireless worker who dabbled in a number of professions in addition to cattle ranching—from mining to operating a general store to being a postmaster—O’Keefe also had a full personal life. He married three times and had seventeen children. His family continued to live on the ranch until the 1960s, when it was opened to the public as a heritage site and tourist attraction. This concise biography brings the dynamic figure of O’Keefe to life and illuminates a fascinating period in BC history.

Sherri Field’s interest in the life of Cornelius O’Keefe began when she was a student at Okanagan University College and continued for the five years that she worked as heritage interpreter at the Historic O’Keefe Ranch. Her fascination with O’Keefe led to years of research into his long and prolific life, and eventually to this book. When she is not writing, Field teaches high school English.

Ken Mather has been involved in researching, writing and interpreting western Canadian heritage for nearly four decades. He started out as a researcher for Fort Edmonton Park in 1973. In 1979, Ken moved to BC to work at Barkerville Historic Park; he became the park's curator in 1982. From 1984 until 2004 he was the manager/curator of the historic O'Keefe Ranch near Vernon, BC, where he developed his love of early cowboy history. Ken continues as the curator at the O'Keefe Ranch and lives with his wife, Debbie, near Armstrong, BC.

"Field’s carefully researched book is a valuable contribution to the sparse literature on the Okanagan’s cattle-ranching era."

Other titles by Ken Mather

The Saga of the Cariboo Gold Rush, Revised and Expanded Edition

A History of Barnard's Express

Stories from the Frontier

Frontier Cowboys and the Great Divide

Early Ranching in BC and Alberta

Ranching in the West in the Early 20th Century

The Early Days of Ranching in British Columbia