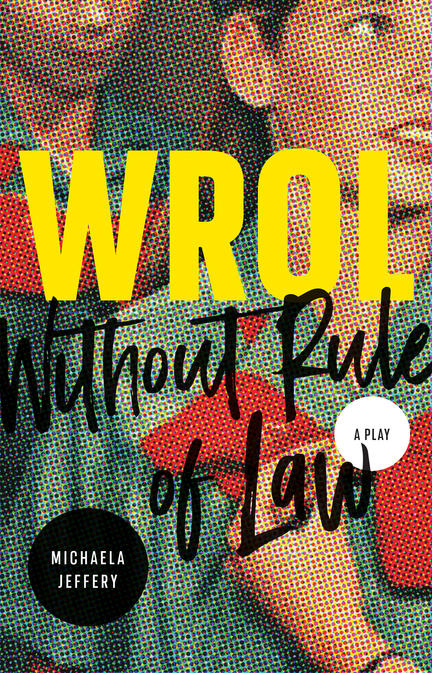 Convinced the world at large can’t be trusted to prioritize the well-being of adolescent girls in the event of a cataclysmic event (or just in general), a determined troupe of preteen “doomers” commit to preparing for survival in the post-collapse society they anticipate inheriting.

When Maureen, Jo, Sarah, Vic, and Robbie sneak out at night to investigate an ominous hidden lair in the woods, they believe they have stumbled onto proof of what happened to a mysterious local cult that vanished over a decade ago. As they search for vital clues, examining small bones and dusty cans of food for signs of life, they fight to be understood in a world that seems to reject them. What they discover changes everything—eighth grade will never be the same.

Part Judy Blume, part Rambo, this darkly comic coming-of-age story for complicated times is for any young woman who has ever been told that she is “too much,” or that what she fears is illegitimate, or that what she has to say is less important than keeping the peace.

Michaela is an Alberta-based playwright and graduate of the National Theatre School of Canada. Recent writing credits include The Extractionist, Persephone Bound, WROL (Without Rule of Law), Wolf on the Ringstrasse, The Listening Room, and others. Michaela was a recent finalist in the Alberta Playwrights Network 2019 Alberta Playwriting Competition for WROL (Without Rule of Law) as well as a finalist for the Playwrights Guild of Canada’s RBC Emerging Playwright Award and a recipient of the national Enbridge Playwrights Award (Emerging Category).

Excerpt: WROL (Without Rule of Law) (by (author) Michaela Jeffery)

VIC: Sorry. I’m not totally clear on what we’re doing.

SARAH: We’ve been trying, for years, to locate some people from nearby here who... went missing. VIC: Like, from your presentation.

MAUREEN: Yeah, we do.

SARAH and MAUREEN exchange a look.

Like, four years ago, Josephine’s parents – they’re both psychologists, that will be relevant in a minute – they’re having this bad time, basically, in their marriage, and they move into
the house – well, where Jo lives now – and she’s eight, and she doesn’t know anyone, so she... starts talking to this (SARAH glances at MAUREEN) imaginary friend who lives in the playhouse at the back of the yard, and they – her mom and dad – think that it’s the hostile environment in the house, that she’s, like, acting out because of their issues.

So they send her to this other therapist friend of theirs, and then away, to live with relatives ... for a year. But then her dad one day goes out to the playhouse, and finds these stacks of ...bird bones. And other stuff. And so they call the police and it turns out there had been an actual homeless guy living there. In the playhouse. And when they found out that the kid – that Jo – had been talking to him, the police wanted to interview her because they thought this guy in the playhouse might have been one of the Shelton Commune people who had come back.

MAUREEN: ...or stayed behind.

SARAH: Right. Or stayed behind when they all... when whatever happened to them happened.

VIC: Why did they think that’s who he was?

SARAH: We aren’t sure, exactly, but according to Jo they were suddenly really interested in finding him.

SARAH: We didn’t know. Before now.

ROBBIE: (suddenly regretting all his life choices) I – whoa – I saw a guy, at a distance, at night who might have been this guy.

ROBBIE: On the road. Geoff and I followed him up here.

VIC: Here? Like…in here? You saw him come in here?

ROBBIE: I think so.

The room gets a few degrees chillier.

SARAH: You think so?

ROBBIE: It was dark.

VIC: Well, someone is living here.

SARAH: You didn’t actually see him come in here?

ROBBIE: OH MY GOD SARAH. We were following him from a responsible distance because we didn’t know what – like – he could have been the frigging Tully Turnpike Man –

ROBBIE: People have seen him at night, by the Tully Turnpike, by the gas station, and the story is that he just kind of hangs out there by the road, waiting for you to drive by. And when you look in your rear- view mirror you’ll see him, except he’s now in the middle of the road and he’s on all fours smiling and crawling towards you and even as you accelerate he gets faster – keeping up with your vehicle –

VIC: And then what?

VIC: He chases you down, he catches you, and then what?

VIC: Is that what we are looking for, then? Jars of tongues and eyeballs?

MAUREEN: I think I found one.

She squats down and carefully picks something up.

She throws an empty can of Beef-a-Roni at him. He turns away at the last second and it bounces off his back.

SARAH: Okay, okay, guys, stop. You’re messing up the integrity of the site. I think it would be best to not disturb things. More.

ROBBIE: Right, the Tully Turnpike Man, is he connected to the Shelton Commune, or...

SARAH: No, not really, but people have kind of blended it, tenuously, that story, because it’s about something creepy happening nearby so it must have something to do with the commune, right?

There are a lot of stories and none of them are, in any way, provably true

“The Doomers’ anger comes from a place of compassion—for each other, for the planet and even for Robbie—which we understand by the time the lights go up. It’s not easy to tackle that and make us laugh, too.”