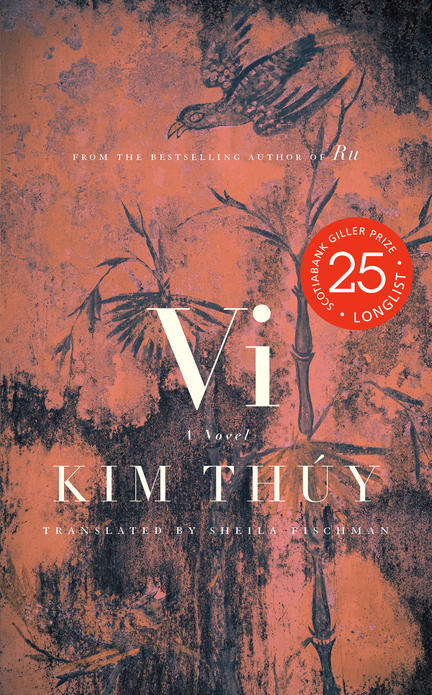 LONGLISTED FOR THE SCOTIABANK GILLER PRIZE: The perfect complement to the exquisitely wrought novels Ru and Mãn, Canada Reads winner Kim Thúy returns with Vi, exploring the lives, loves and struggles of Vietnamese refugees as they reinvent themselves in new lands.

The daughter of an enterprising mother and a wealthy, spoiled father who never had to grow up, Vi was the youngest of their four children and the only girl. They gave her a name that meant "precious, tiny one," destined to be cosseted and protected, the family's little treasure.
But the Vietnam War destroys life as they've known it. Vi, along with her mother and brothers, manages to escape--but her father stays behind, leaving a painful void as the rest of the family must make a new life for themselves in Canada.
While her family puts down roots, life has different plans for Vi. Taken under the wing of Hà, a worldly family friend, and her diplomat lover, Vi tests personal boundaries and crosses international ones, letting the winds of life buffet her. From Saigon to Montreal, from Suzhou to Boston to the fall of the Berlin Wall, she is witness to the immensity of geography, the intricate fabric of humanity, the complexity of love, the infinite possibilities before her. Ever the quiet observer, somehow Vi must find a way to finally take her place in the world.

Born in Saigon in 1968, KIM THÚY left Vietnam with the boat people at the age of ten and settled with her family in Quebec. A graduate in translation and law, she has worked as a seamstress, interpreter, lawyer, restaurant owner, and commentator on radio and television. She lives in Montreal and devotes herself to writing.

SHEILA FISCHMAN is the award-winning translator of some 200 contemporary novels from Quebec. In 2008 she was awarded the Molson Prize in the Arts. She is a Member of the Order of Canada and a chevalier of the Ordre national du Québec. She lives in Montreal.

CATINAT   WE LEFT VIETNAM with a close friend of my mother, Hà, and her parents.

Hà is much younger than my mother. At the beginning of the 1970s in Saigon, she was the perfect modern woman in the American style, with her very short dresses that showed off the slanted, heart-shaped birthmark high up on her left thigh. I remember her irresistible platform shoes in the hallway of our house, which struck me as decadent, or at least gave me a new perspective on the world when I slipped them on. Her false eyelashes thick with mascara transformed her eyes into two spiky-haired rambutans. She was our Twiggy, with her apple-green and turquoise eyeshadow, two colours that clashed with her coppery skin. She was unlike most of the young girls, who avoided the sun in order to set themselves apart from the peasants in the rice fields, who had to roll their pants up to their knees and endure the violent bright light. Hà bared her skin at the swimming pool of the very exclusive Cercle Sportif, where she gave me swimming lessons. She preferred American freedom to the elegance of French culture, which gave her the courage to participate in the first Miss Vietnam competition, even though she was an English teacher.

My mother did not approve of her choices, which went contrary to her status as a well-educated young woman from a good family. But she supported her by buying her the long dress and bathing suit that Hà would wear on stage. She had her practise walking in a straight line along the tiled floor, balancing a dictionaryon her head, as she’d seen women do in films. My mother treated her as if she were her big sister,and shielded her from gossip. She allowed Hà to takeme with her to the chic boutiques on rue Catinat, andto drink a lime soda with her foreign friends. Hàmarched along this street with its grand hotels like aproud conqueror. The city belonged to her. I wonderedwhether my mother envied her this ease thatcame from the compliments raining down on herfrom her teachers and her American colleagues. Thelatter celebrated her beauty with gifts of chocolate bars,hair curlers, and Louis Armstrong records, whereasthe Vietnamese looked on her dark complexion as“savage.” More than once, my grandparents asked mymother to halt my swimming lessons with Hà. I suspectthat my mother disobeyed them and kept Hàclose to us because she hoped I’d learn to be beautiful. Unfortunately, that time with Hà in Vietnam was tooshort—or my apprenticeship, too slow.

FINALIST FOR THE 2019 GOVERNOR GENERAL'S LITERARY AWARD IN TRANSLATION
LONGLISTED FOR THE 2018 SCOTIABANK GILLER PRIZE
“Thúy is known for her short and elegant stories about being a refugee and immigrant, and the challenges of adapting to a new culture. In her novels, we experience Vietnam’s colours and tastes, the difficulties of exile but also riches, and a search for identity that we can all recognize ourselves in.” —The New Academy jury citation

“Kim Thúy’s novels are as compact as her tiny titles might suggest . . . but their poetic contents punch well above their weight in terms of story and raw emotional heft.” —Becky Toyne, The Globe and Mail

“At once highly stylized and emotionally raw, Vi is as elegant, refined. Exquisite from start to finish.” —Toronto Star
“Thúy’s fiction is wholly original. Not only does she pursue her very personal theme of the Vietnamese refugee experience, she does it in gem-like poetic prose so beautiful you want to read whole paragraphs twice.” —Susan G. Cole, NOW
“Kim Thuy’s Vi is the most beautifully written book I’ve ever read. This is the perfect book to curl up with at the end of a busy day.” —Lesley Wilkins of Blue Heron Books (Uxbridge, ON), 49th Shelf

“Thúy . . . bravely exposes the sordid reality of racism in Vietnam. . . . Vi, a fragment of the name Vincent, is another example of Thúy’s playfulness with words. In particular, Thúy studies distinctions between languages as if this scrutiny might divulge the reasons for distinctions between peoples. . . . [The] story feels freighted with history.” —Donna Bailey Nurse, Literary Review of Canada

Secrets from My Vietnamese Kitchen

Simple Recipes from My Many Mothers: A Cookbook

A Crossing of Hearts