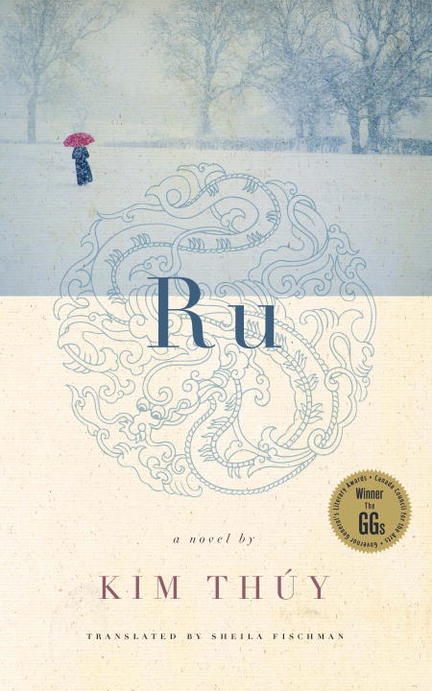 A runaway bestseller in Quebec, with foreign rights sold to 15 countries around the world, Kim Thúy's Governor General's Literary Award-winning Ru is a lullaby for Vietnam and a love letter to a new homeland.

Ru. In Vietnamese it means lullaby; in French it is a small stream, but also signifies a flow - of tears, blood, money. Kim Thúy's Ru is literature at its most crystalline: the flow of a life on the tides of unrest and on to more peaceful waters. In vignettes of exquisite clarity, sharp observation and sly wit, we are carried along on an unforgettable journey from a palatial residence in Saigon to a crowded and muddy Malaysian refugee camp, and onward to a new life in Quebec. There, the young girl feels the embrace of a new community, and revels in the chance to be part of the American Dream. As an adult, the waters become rough again: now a mother of two sons, she must learn to shape her love around the younger boy's autism. Moving seamlessly from past to present, from history to memory and back again, Ru is a book that celebrates life in all its wonder: its moments of beauty and sensuality, brutality and sorrow, comfort and comedy.

KIM THÚY has worked as a seamstress, interpreter, lawyer and restaurant owner. She currently lives in Montreal where she devotes herself to writing.

Sheila Fischman is the award-winning translator of some 150 contemporary novels from Quebec. In 2008 she was awarded the Molson Prize in the Arts. She is a Member of the Order of Canada and a chevalier de l'Ordre national du Québec. She lives in Montreal.

I came into the world during the Tet Offensive, in the early days of the Year of the Monkey, when the long chains of firecrackers draped in front of houses exploded polyphonically along with the sound of machine guns.

I first saw the light of day in Saigon, where firecrackers, fragmented into a thousand shreds, coloured the ground red like the petals of cherry blossoms or like the blood of the two million soldiers deployed and scattered throughout the villages and cities of a Vietnam that had been ripped in two.

I was born in the shadow of skies adorned with fireworks, decorated with garlands of light, shot through with rockets and missiles. The purpose of my birth was to replace lives that had been lost. My life’s duty was to prolong that of my mother.

My name is Nguyen An T?nh, my mother’s name is Nguyen An Tinh. My name is simply a variation on hers because a single dot under the i differentiates, distinguishes, dissociates me from her. I was an extension of her, even in the meaning of my name. In Vietnamese, hers means “peaceful environment” and mine “peaceful interior.” With those almost interchangeable names, my mother confirmed that I was the sequel to her, that I would continue her story.

The History of Vietnam, written with a capital H, thwarted my mother’s plans. History flung the accents on our names into the water when it took us across the Gulf of Siam thirty years ago. It also stripped our names of their meaning, reducing them to sounds at once strange, and strange to the French language. In particular, when I was ten years old it ended my role as an extension of my mother.

Because of our exile, my children have never been extensions of me, of my history. Their names are Pascal and Henri, and they don’t look like me. They have hair that’s lighter in colour than mine, white skin, thick eyelashes. I did not experience the natural feelings of motherhood I’d expected when they were clamped onto my breasts at 3 a.m., in the middle of the night. The maternal instinct came to me much later, over the course of sleepless nights, dirty diapers, unexpected smiles, sudden delights.

Only then did I understand the love of the mother sitting across from me in the hold of our boat, the head of the baby in her arms covered with foul-smelling scabies. That image was before my eyes for days and maybe nights as well. The small bulb hanging from a wire attached to a rusty nail spread a feeble, unchanging light. Deep inside the boat there was no distinction between day and night. The constant illumination protected us from the vastness of the sea and the sky all around us. The people sitting on deck told us there was no boundary between the blue of the sky and the blue of the sea. No one knew if we were heading for the heavens or plunging into the water’s depths. Heaven and hell embraced in the belly of our boat. Heaven promised a turning point in our lives, a new future, a new history. Hell, though, displayed our fears: fear of pirates, fear of starvation, fear of poisoning by biscuits soaked in motor oil, fear of running out of water, fear of being unable to stand up, fear of having to urinate in the red pot that was passed from hand to hand, fear that the scabies on the baby’s head was contagious, fear of never again setting foot on solid ground, fear of never again seeing the faces of our parents, who were sitting in the darkness surrounded by two hundred people.

Before our boat had weighed anchor in the middle of the night on the shores of Rach Gia, most of the passengers had just one fear: fear of the Communists, the reason for their flight. But as soon as the vessel was surrounded, encircled by the uniform blue horizon, fear was transformed into a hundred-faced monster who sawed off our legs and kept us from feeling the stiffness in our immobilized muscles. We were frozen in fear, by fear. We no longer closed our eyes when the scabious little boy’s pee sprayed us. We no longer pinched our noses against our neighbours’ vomit. We were numb, imprisoned by the shoulders of some, the legs of others, the fear of everyone. We were paralyzed.

The story of the little girl who was swallowed up by the sea after she’d lost her footing while walking along the edge spread through the foul-smelling belly of the boat like an anaesthetic or laughing gas, transforming the single bulb into a polar star and the biscuits soaked in motor oil into butter cookies. The taste of oil in our throats, on our tongues, in our heads sent us to sleep to the rhythm of the lullaby sung by the woman beside me.

My father had made plans, should our family be captured by Communists or pirates, to put us to sleep forever, like Sleeping Beauty, with cyanide pills. For a long time afterwards, I wanted to ask why he hadn’t thought of letting us choose, why he would have taken away our possibility of survival. I stopped asking myself that question when I became a mother, when Dr. Vinh, a highly regarded surgeon in Saigon, told me how he had put his five children, one after the other, from the boy of twelve to the little girl of five, alone, on five different boats, at five different times, to send them off to sea, far from the charges of the Communist authorities that hung over him. He was certain he would die in prison because he’d been accused of killing some Communist comrades by operating on them, even if they’d never set foot in his hospital. He hoped to save one, maybe two of his children by launching them in this fashion onto the sea. I met Dr. Vinh on the church steps, which he cleared of snow in the winter and swept in the summer to thank the priest who had acted as father to his children, bringing up all five, one after the other, until they were grown, until the doctor got out of prison.

I didn’t cry out and I didn’t weep when I was told that my son Henri was a prisoner in his own world, when it was confirmed that he is one of those children who don’t hear us, don’t speak to us, even though they’re neither deaf nor mute. He is also one of those children we must love from a distance, neither touching, nor kissing, nor smiling at them because every one of their senses would be assaulted by the odour of our skin, by the intensity of our voices, the texture of our hair, the throbbing of our hearts. Probably he’ll never call me maman lovingly, even if he can pronounce the word poire with all the roundness and sensuality of the oi sound. He will never understand why I cried when he smiled for the first time. He won’t know that, thanks to him, every spark of joy has become a blessing and that I will keep waging war against autism, even if I know already that it’s invincible. Already, I am defeated, stripped bare, beaten down.

"This is an exemplary autobiographical novel. Never is there the slightest hint of narcissism or self-pity. The major events in the fall of Vietnam are painted in delicate strokes, through the daily existence of a woman who has to reinvent herself elsewhere. A tragic journey described in a keen, sensitive and perfectly understated voice."
—Governor General's Literary Award jury citation

“Gloriously, passionately, delicately unique….  A remarkable book; one that has well-earned every note of praise it has received.”
—The Chronicle Journal

“Powerful and engaging.... In short entries that read lyrically and poetically—but also powerfully, pungently, and yet gently, dispassionately—Ru blends politics and history, celebration and violence within a young girl’s imaginative experience…. [I]ts hybrid and enchanted voice conjur[es] a love song out of chaos and pain, singing and rilling its simplicities.”
—Winnipeg Free Press

“In a series of vignettes which extend from wartime Vietnam to the hospitable precincts of Quebec, Kim Thúy writes with equal delicacy and candor about a childhood marked by horrifying brutality, and the pleasures of ordinary peace. A brave and moving book, bringing lucid insight both to the costs of violence, and elusive processes of psychic survival.”
—Eva Hoffman, author of Lost in Translation

This book is beautifully written, leaves you with images that are vivid, heartbreaking and hopeful. I read it in French and I am sure that Ms. Sheila Fischman's translation allows the same feelings in English.

Secrets from My Vietnamese Kitchen

Simple Recipes from My Many Mothers: A Cookbook

How many books from Armin Wiebe's 100 Novels List have you read?