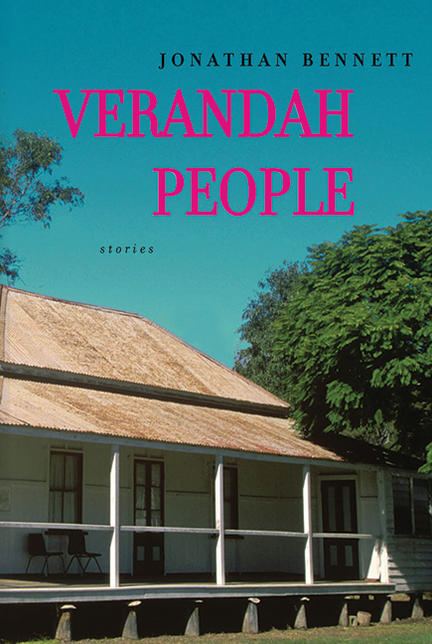 In these powerful stories, the “verandah people” are Jonathan Bennett’s own compatriots: Australians for whom the ever-present verandah is both stage and shelter, a retreat from hostile bushland or city street and a seductive barrier to participation in the wider world.

Jonathan Bennett is the author Here is my street, this tree I planted for ECW Press, and After Battersea Park and Verandah People for Raincoast Books. In 2003, he was a finalist for ARC magazine’s “poem of the year” award. Originally from Sydney, Australia, he now lives in Port Hope, Ontario.

Marcus listened to the rain keeping an imprecise rhythm as it fell sharply on the corrugated iron roof. Tonight, his wife’s absence was so heavy and certain as to almost stir in the bed next to him. He felt stillness where her shallow breathing used to touch the skin of his neck and saw nothing where her brown-grey hair once splayed across the pillow in a fan. On their last night in this bed together, months ago now, he had thought Judith’s breathing sounded uncomfortable. She had twitched every now and then, disturbing him, her dreams keeping him awake. But tonight he was left with only the rain. Its unorchestrated pings on the roof.

The next morning, dry-mouthed and with an unsteady hand, he tea-spooned instant coffee crystals into a mug. How could they possibly cure him, he thought, such tiny things. Judith’s alarm clock had rung minutes after he’d finally drifted off to sleep. In a rage he’d torn the plug from the wall. The clock face had cracked as it struck the doorframe.

Filling the kettle over the sink, Marcus’s eyelids ached if he forced them to remain open and stung when he allowed them to close. He’d slept like an awkward-limbed teenager, an uncoordinated sleep that performed self-consciously before the edge of the day. Right before the alarm sounded, a single, fractured dream had begun. It made use of the only noise around him — the rain — to create a scene with Judith in the shower, her soapy legs, clouds of steam, and the smooth, familiar strokes of her razor running the length of her shin bone and calf muscles. The alarm woke him up before the blood, before any horror could develop.

The kettle whistled. Marcus considered the twenty minutes that remained before he was due at a job — the big place at the end of the point. The old woman, who’d phoned yesterday quite out of the blue, had asked for a quote on some exterior work: painting a detailed verandah, some stripping, varnishing and a whitewash. Is it still raining? he wondered. Can’t exactly paint outside in bad weather. Marcus stopped and listened, wondering if he was up to it, if or why he should be bothered at all. The roof was silent.

The kettle stopped whistling and he poured a cup of coffee that tasted bitter. There was nothing to eat in his fridge and so he eyed the cereal box on the table. It was his young son, Kevin’s, and had been left out since the boy’s last visit — a week ago now. This reminded him: he must pick Kevin up from school today. It was Dad’s turn again. Would he ever get used to this, only having his boy for twenty-four hours every seven days? Did she know what she’d done to him, and to his little boy, to them all? He had never been unfaithful; he had always worked hard, fed them. Marcus put his hand in the cereal box and crunched on a few sickeningly sweet Froot Loops then drank more of his coffee. He felt like Judith’s greasy eggs and sausages. He felt like shit.

A low mass of lead-coloured cloud hung over the bay, a mist of rain pressing down on the still water. As though it were robbed of oxygen, the strip of bush separating sky from water shed only a faint hue, a blue with red sympathies, almost periwinkle. Gum trees could, in a certain light, appear blue. They were blue now. Not as blue as ink, but a light silvery blue. This was the scene upon which Marcus turned his back as he stepped in through the open door of the house beside the bay, at the end of the point. He regarded the painting on the wall opposite him.

He stood before it like a witness, as if it were the accused. It showed a partial doorframe, and through the doorway there were chairs under an overhanging verandah that led out to grass and garden — a sun-filled day outside, depicted from the inside. He admired the prominent dabs of colour in this typical scene: blues, greens, yellows, and oranges.

“You’re here for the verandah?”

“Yes,” he said, noticing she had a touch of England still left in her accent. “My name is Marcus Page.” His eyes ran over her thin arms, her slender fingers.

Other titles by Jonathan Bennett

Here Is My Street, This Tree I Planted