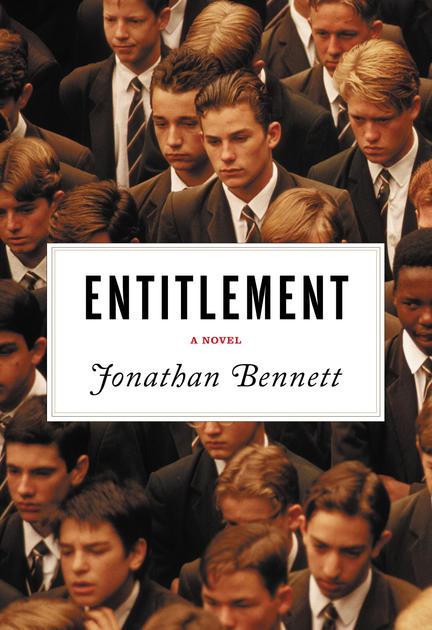 Entitlement is the tragic, wrenching story of Andy Kronk. After a lifetime intertwined with the Aspinalls, one of Canada’s wealthiest families, Andy has finally forged a clean break. Mere months pass, however, before his past returns, and he finds himself, obediently, digging …

At its heart, Entitlement is a story about identity — about who we think we are and where we really stand. Set in rural Ontario and with excursions to Toronto and New York City, the novel takes a provocative and honest look at class, power, male relationships, death, and the familial bonds that tie, protect and harm us most.

Andy’s story is revealed to Trudy Clarke. Writing an Aspinall “tell-all” biography, she wants Kronk’s take for her book. Reluctantly, Andy agrees to talk. He begins by explaining that when he quit practising law, all he wanted was a clean start and the privacy to live life on his own terms. But, as he explains over the course of a weekend interview, his boyhood boarding school entanglement with one of Canada’s elite families became complicated — and remains strong. As the weekend progresses, Andy grows comfortable. When he realizes that he’s gone too far, said too much, it’s too late…

Written in forceful prose, with a poet’s ear, Jonathan Bennett’s Entitlement does for the world of power and privilege what David Adams Richards has done for the hardscrabble blue collar men and women of his award-winning novels — tearing down myths to reveal something essentially, and always, heartbreakingly human.

Jonathan Bennett is the author Here is my street, this tree I planted for ECW Press, and After Battersea Park and Verandah People for Raincoast Books. In 2003, he was a finalist for ARC magazine’s “poem of the year” award. Originally from Sydney, Australia, he now lives in Port Hope, Ontario.

Back in the fall Andy Kronk escaped north to this cottage on Broad Lake. At the time of purchase he’d brimmed with renovation plans and enthusiasm, levelling the foundation, painting, and calling a local contractor to come by and quote on installing a new septic tank. He had been in no hurry for this last expense. The trudge to the outhouse was onerous, not unbearable. Rustic charm. He’d planned on doing it in another year. But then, in the winter, his needs abruptly changed.

When can you begin work? he’d asked the man on the phone.

Good few more weeks yet, said the contractor. The ground’s frozen pretty deep out by you. Lots of rock too. Be hard going if we don’t wait.

To Andy, the gruff man sounded bearlike, not yet willing to emerge from hibernation. Please, said Andy, as soon as you can.

And while the long nights still assuredly fell below zero, last week he opened the side door of his cottage after lunch and in the air there was a change. The sky was light blue, the sun fragile but warm. There was no wind. He stood still enjoying the peace. Then faintly, he heard a sound. He waited. There, again. And again. He walked toward it. From the corner of his cottage, through a small hole in the eavestrough, a single drop of water slowly bulged then dripped. The temperature was above freezing. Soon the contractor could begin work.

Were he still in Toronto, weather like this would be cause for celebration. After months of truculent winter, this advance taste of spring would prompt him, along with several other lawyers, to go in search of a restaurant with a patio. There they would join the swell of rapt Torontonians heading outdoors. They would loosen their ties, roll the cuffs of their white dress shirts a turn or two, put on sunglasses, sit under gas-powered heaters, and sip at tall glasses of blond beer. They would not speak much. Instead they would drink, watch the streetcars rumble past, and, occasionally, one of them would angle a pale face directly at the sun, grin broadly, and say, Oh, right fuckin’ on.

The backhoes and workmen were at it within the week — their first job of the season. Over several days they dug the primary hole and trenches. They laid pipes, installed a toilet, sink, and shower stall, replaced plumbing underneath the cottage, and debated where to put the drain field. The huge concrete tank had been ordered, Andy was told, from a reliable supplier, and would be delivered and lowered into place tomorrow, next Tuesday at the latest.

You’ll have yourself a flush toilet in days there guy, the contractor had said yesterday with a slap on Andy’s back.

Pushing his hands up under his armpits Andy countered with, Cold enough for you?

They were quiet for a time.

Be able to do away with that outhouse soon for good, said the man. No more putting on your Kodiaks when you need to go to the shitter, eh?

Need the name of a honey wagon?

I will, I suppose. Yes, said Andy. The man took out his wallet and gave Andy a business card.

That’s my brother-in-law. Knows how to take shit alright — married my sister, didn’t he?

The man revealed his generous, gap-toothed smile before walking off. Andy watched for a bit after his truck had pulled away.

At first Andy’s dreams had come at night spawning horrors. He woke gasping for fresh air. Then, bolder, the dreams broke through during the day, creeping into the bathroom mirror, the lid of a pot, a knife’s blade as his thumb passed over it rinsing off suds under warm running water. The images took over, vivid and loud. They ran together making complex stories. Andy believed he was inside them, experiencing a kind of authentic life so tangible that it was difficult to be unable, upon awaking, to discuss it in concrete, sane terms — especially with those who had appeared in them alongside him.

Most often he was with Colin in the dreams. When they were young, together out on the lake in a boat, then years later in New York City in an elevator, and then in a park where Colin hovered a foot off the ground, a spectre wearing a cape. The dreams were fantastical, intimate, absolutely true.

Other titles by Jonathan Bennett

Here Is My Street, This Tree I Planted