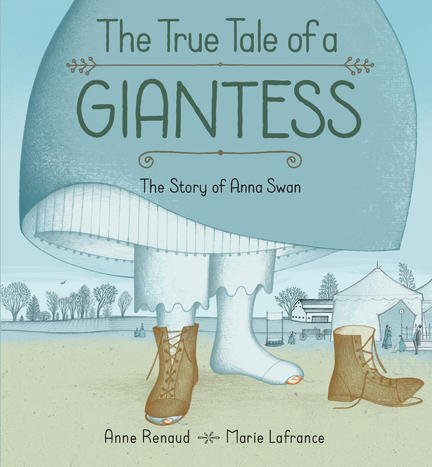 “When I was small, I was already big news,” Anna Swan tells readers in this picture book biography. When she was born in Nova Scotia in 1846, people for miles around chattered about her. They whispered over tea and gossiped across fences. Because even when she was small, Anna was TREMENDOUS. At four years old, she was higher than a rain barrel. At six, she was taller than her mother, and by ten she towered over her father. Anna grew up feeling like she poked and bulged and jutted out from all sorts of spaces, never quite fitting into her small country life. Then, at age seventeen, Anna moved to New York City to be part of P. T. Barnum's Gallery of Wonders --- and her life changed forever. Anna Swan lived an inspiring life as big as she was, filled with fame, wealth, world travel and true love.

In this thoroughly researched picture book biography, Anne Renaud uses playful and rhythmic language and first-person storytelling to perfectly capture the essence of this unique woman's uplifting life. The detailed, folk art-inspired illustrations beautifully convey the story's time and place and sensitively portray Anna's growth. A great lead-in for classroom discussions about differences and inclusion, this book also offers an excellent character education lesson on perseverance. An author's note with photographs and more information about Anna's life make this a terrific choice for lessons on personal development or for social studies lessons on this period in history.

Anne Renaud is a life-long Quebecker and is the author of several picture books, as well as historical non-fiction books for children, including: The Extraordinary Life of Anna Swan (CBU Press), A Bloom of Friendship: The Story of the Canadian Tulip Festival, Island of Hope and Sorrow: The Story of Grosse Île, and Into the Mist: The Story of the Empress of Ireland. An expanded edition of Pier 21: Stories from Near and Far, first published in 2008, is forthcoming from CBU Press. Anne’s work has been nominated for several awards, including the Silver Birch Award, the Hackmatack Children’s Choice Award, the Red Cedar Book Award and the Red Maple Award. The Extraordinary Life of Anna Swan ( for CBU Press, 2013) was shortlistedthe Quebec Writers’ Federation Prize for Children's & Young Adult Literature. Anne is also a regular contributor to children’s magazines, such as Highlights, Pockets, Cricket, Odyssey, Faces, Clubhouse and Shine. She hopes her books educate, entertain and inspire children.

MARIE LAFRANCE has spent her whole life drawing pictures, at first to keep from biting her nails, then for magazines, newspapers, posters, billboards and board games. Now she illustrates picture books, including The Lady with the Books, Oscar Lives Next Door, and Bunny the Brave War Horse. Her book A Hen for Izzy Pippik won the Ruth and Sylvia Schwartz Award. Marie lives in Montreal, Quebec.

... young readers' curiosity will be sparked by her unusual size, but they'll also relate to the theme of finding a place to fit in.—Booklist

This book would be good to use with young children to show how even though some people may look different, everybody has a place.—Resource Links

Author Anne Renaud gives Swan a voice to tell her own life story.—Montreal Review of Books

Other titles by Anne Renaud

Stories from Near and Far

A Bloom of Friendship

The Story of the Canadian Tulip Festival

Pier 21:Stories From Near and Far (New E

The Extraordinary Life of Anna Swan

The Story of the Empress of Ireland

Other titles by Marie Lafrance

We Are All Ears!