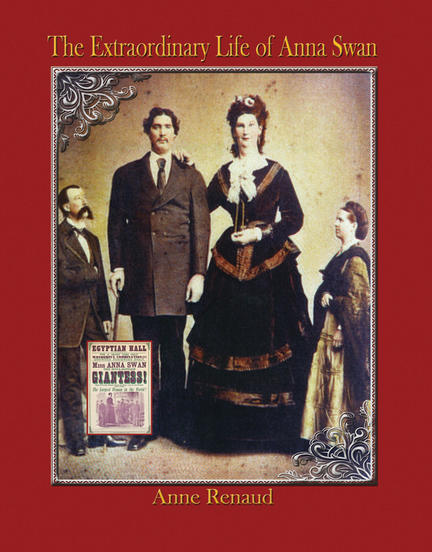 On a balmy August morning in 1846, a child was born to Ann and Alexander Swan in the couple’s small wood cabin in Millbrook, Colchester County, Nova Scotia. This in itself was not odd, as home was where babies were most often born in the mid-19th century. What was surprising, however, was that Anna Swan weighed an amazing 6 kilograms (13 pounds) – almost twice the size of an average newborn. Anna Swan grew to an astonishing size – nearly 2.5 metres (almost 8 feet) tall. She was billed as “The Nova Scotia Giant Girl” at P.T. Barnum’s American Museum in New York. But despite her unusual and challenging physical attributes, she rose above adversity and led a life of love, happiness and great accomplishments. This is her remarkable story.

Anne Renaud is a life-long Quebecker and is the author of several picture books, as well as historical non-fiction books for children, including: The Extraordinary Life of Anna Swan (CBU Press), A Bloom of Friendship: The Story of the Canadian Tulip Festival, Island of Hope and Sorrow: The Story of Grosse Île, and Into the Mist: The Story of the Empress of Ireland. An expanded edition of Pier 21: Stories from Near and Far, first published in 2008, is forthcoming from CBU Press. Anne’s work has been nominated for several awards, including the Silver Birch Award, the Hackmatack Children’s Choice Award, the Red Cedar Book Award and the Red Maple Award. The Extraordinary Life of Anna Swan ( for CBU Press, 2013) was shortlistedthe Quebec Writers’ Federation Prize for Children's & Young Adult Literature. Anne is also a regular contributor to children’s magazines, such as Highlights, Pockets, Cricket, Odyssey, Faces, Clubhouse and Shine. She hopes her books educate, entertain and inspire children.

Other titles by Anne Renaud

True Tale of a Giantess, The

The Story of Anna Swan

Stories from Near and Far

A Bloom of Friendship

The Story of the Canadian Tulip Festival

Pier 21:Stories From Near and Far (New E

The Story of the Empress of Ireland