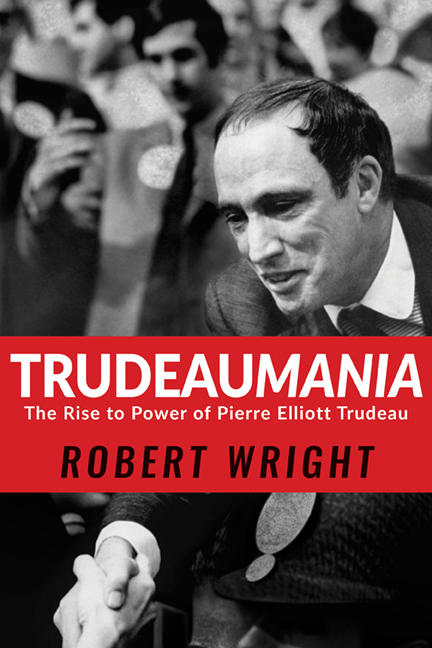 A Hill-Times Best Book of the Year

Nearly twenty years after his death and more than thirty since his retirement from active politics, Pierre Elliott Trudeau is at long last receding from the lived memory of Canadians. But despite the distance of time, he still holds court in the minds of many, and today his son Justin now lives at 24 Sussex Drive, his own man, though still a Trudeau holding Canada’s highest office.

Trudeaumania is about Pierre Trudeau’s rise to power in 1968. This is a story we thought we knew—the epic saga of the hipster Montrealer who drove up to Ottawa in his Mercedes in 1965, wowed the country with his dictum that “the state has no business in the bedrooms of the nation,” rocked the new medium of television like no one since JFK, and in scant months rode the crest of Canadians’ Centennial-era euphoria into power. This is Canada’s own Camelot myth. It embodies the quirkiness, the passion and the youthful exuberance we ascribe to the 1960s even now. Many of us cherish it. Unfortunately, it is almost entirely wrong. In 1968 Trudeau put forward his vision for Canada’s second century, without guile, without dissembling and without a hard sell. Take it or leave it, he told Canadians. If you do not like my ideas, vote for someone else. We took it.

By bestselling and award-winning author Robert Wright, Trudeaumania sets the record straight even as it illuminates this important part of our history and shines a light on our future.

Robert Wright, Ph.D., is a professor of history at Trent University, specializing in foreign policy. He is the author of the national bestseller Three Nights In Havana, which won the 2008 Canadian Authors’ Association’s Lela Common Award for Canadian History and is currently being made into a feature documentary. He resides in Toronto with his wife and children. Visit him at http://www.robertwright.ca/.

“Fascinating. More than any other, this aspect of Trudeau’s story requires a historical passport, and Wright provides one.”

“Robert Wright is a historian, one of a very few who can draw the drama out of past events without sacrificing authenticity and integrity.”

“An absolutely incredible book--Wright’s best by a wide margin. It’s gripping as hell, with a ton of energy and momentum. Like all great history books, this book teaches us as much about the present, and how we got here, as it does about the past.”

Andrew Potter, Director, McGill Institute for the Study of Canada and co-author of <em>The Rebel Sell</em>

“Trudeaumania is a rare type of accessible intellectual history. Wright has struck an excellent balance between his own analysis, quotes from contemporary journalists, and letting Trudeau’s words (and the man is endlessly quotable) speak for themselves.”

“[An] insightful view of a turning point in Canada’s history . . . does sterling service to Trudeau’s memory.”

“A fascinating and well-constructed narrative.”

Other titles by Robert Wright

Three Nights in Havana and Our Man in Tehran

Our Man In Tehran

Our Place in the Sun

Canada and Cuba in the Castro Era

The River of History

Nationalism, Culture, and the Canadian Question

Youth Culture, Book Publishing, and the Greying of Canadian Nationalism

Canadian Protestantism and the Quest for a New International Order, 1918-1939