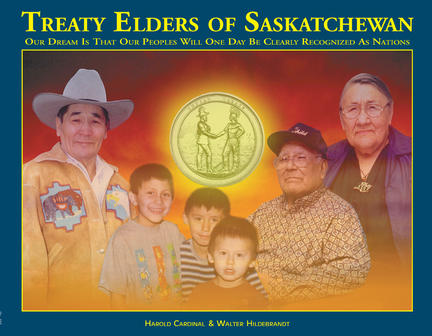 "It is my hope, and the hope of the Office of the Treaty Commissioner, that Treaty Elders of Saskatchewan: Our Dream Is That Our Peoples Will One Day Be Clearly Recognized as Nations can help provide the historical context needed to intelligently and respectfully forge new relations between First Nations people and non-Aboriginal people in the province of Saskatchewan. It has already done so, in part, by facilitating the work of our office in bringing together the parties of the Federation of Saskatchewan Indian Nations and Canada to reach common understandings and to use the Treaties as a bridge from the past to the future ... so that we can learn from the past and work together towards a future built on co-operation and mutual respect." Judge David M. Arnot, Treaty Commissioner for Saskatchewan

"We were told that these treaties were to last forever. The government and the government officials, the Commissioner, told us that, as long as the grass grows, and the sun rises from the east and sets in the west, and the river flows, these treaties will last." Treaty 6 Elder Alma Kytwayhat

"We say it's our Father; the White man says "our Father" in his language, so from there we should understand that he becomes our brother and we have to live harmoniously with him. There should not be any conflict, we must uphold the word 'witaskewin,' which means to live in peace and harmony with one another." Elder Jacob Bill

Harold Cardinal (1945–2005), an author and prominent First Nations leader, spent his life working to develop and preserve First Nation culture. In 1968, he became the youngest elected president of the Indian Association of Alberta (1968–1977) and initiated programs to uphold Indigenous culture, religion and traditions. He fought against the 1969 Statement of the Government of Canada on Indian Policy (otherwise known as the White Paper) and authored powerful novels that brought the injustices to light. In 2001, Cardinal was honoured with a Lifetime Achievement Award from the National Aboriginal Achievement Foundation. His work is remembered and taught around the world.

Historian and poet Walter Hildebrant was born in Brooks, Alberta and now lives in Edmonton. He has worked as an historian for Parks Canada and as a consultant to the Treaty 7 Tribal Council, the Federation of Saskatchewan Indian Nations and the Banff Bow Valley Task Force. He is co-author of The True Spirit and Original Intent of Treaty 7 and The Cypress Hills: The Land and Its People, and author of Views From Battleford: Constructed Visions of an Anglo-Canadian West. His long poem Sightings was nominated for the 1992 McNally-Robinson Book of the Year for Manitoba. His book Where the Land Gets Broken won the Stephen G. Stephensson Award for Poetry in 2005. He is presently the Director of the Athabasca University Press. This is his seventh book of poetry.

This book is a very important contribution to available literature on the treaties because it is one of the few titles that brings a truly Indigenous perspective and voice to the topic.

Other titles by Harold Cardinal

Other titles by Walter Hildebrandt

The Battle of Batoche

The Time in Between / Adorno's Daemons

Winnipeg from the Fringes

by (author) Walter Hildebrandt
photographs by Ron A. Drewniak

Constructed Visions of an Anglo-Canadian West