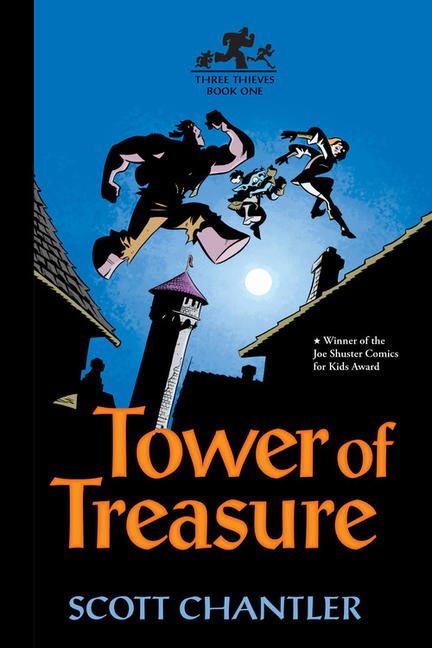 As an acrobat in a traveling circus, 14-year-old orphan Dessa Redd flies through the air with ease. Still, she is weighed down by troubling memories. But when her ragtag circus troupe pulls into the city of Kingsbridge, Dessa feels a tickle of hope. Maybe here in the royal city she will finally find her twin brother --- or the mysterious man who snatched him away when they were just children.

Meanwhile, Topper, the circus juggler, recruits Dessa and the circus strongman, Fisk, for the job of robbing the royal treasury. Hungry and desperate, both agree, setting off a series of adventures that will take the three thieves from one end of the world to the other in search of Dessa's long-lost brother.

Scott Chantler's fast-paced story will engage readers while his bold-lined art with richly detailed backgrounds is a tribute to classic comic books.

Chantler effectively presents action and adventure, with atmospheric coloring to convey the mood. It's an entertaining and action packed new fantasy adventure series that will appeal to fans of the genre.

... creates thrilling action sequences that don't sacrifice sense for sizzle, making this the kind of fantasy tale that can be relished by children of all ages.

The banter among the three is sharp and witty and balances the visual pacing effortlessly. Fast paced, cleanly illustrated, great fun.

A travelling circus arrives in the capital city of Kingsbridge, bringing with it a one-headed Ettin, a small blue Norker and a 14-year-old acrobat on a mission to find her twin brother. Dessa (the acrobat) quickly finds herself on the outs with the circus owner and joins up with Fisk (the Ettin) and Topper (the Norker) to rob the Queen’s Tower of Treasure. The robbery goes awry, and the titular three thieves are caught by the Captain of the Guard. When Dessa realizes the Queen’s Chamberlain is the man who killed her mother and kidnapped her brother, things take a turn for the worse, and the three thieves are sentenced to death. One daring escape later, our heroes are on their way out of town with the Chamberlain’s notebook, a lead on Dessa’s brother and the Queen’s Dragons hot on their trail. We meet up with the three thieves again at The Sign of the Black Rock, a roadside inn where Dessa, Fisk and Topper are attempting to get out of the rain, only to be joined by most of the Queen’s Dragons, a ship full of smugglers and a greedy innkeeper whose wife has a connection to the Queen’s Chamberlain and the book Dessa stole from him.

The main character, Dessa, is a fairly typical plucky heroine, aided by familiar sidekick types Fisk and Topper. The villains are largely straightforward, though the Captain of the Guard has a little more depth. Hopefully, future entries in the series will flesh out the characters further and tell us a little more about the kingdom. Chantler has a nice storytelling style, both textually and visually, and an excellent sense of pacing. The stories never lag, the comedic episodes are well incorporated, and the action sequences are particularly well rendered. The art is a high point, with elements of humour, great facial expressions and a real attention to detail. These stories will be well appreciated by fans of comics and by reluctant readers. While the main character is female, the swashbuckling nature of the story will appeal equally to boys and girls in the 8-to-12 age range.

An acrobat in a travelling circus, 14-year-old orphan Dessa Redd, is looking for her long-lost twin brother. Hungry and desperate, she and Fisk, the circus strongman, are recruited by Topper, the circus juggler, to rob the royal treasury. A series of adventures ensue as the three thieves travel from one end of the world to the other in search of Dessa’s brother. Book One in the series.

Notes from a Children's Librarian: Adventure and the Reluctant Reader

What better way to draw kids in to literature than through exciting plot-driven graphic novels?