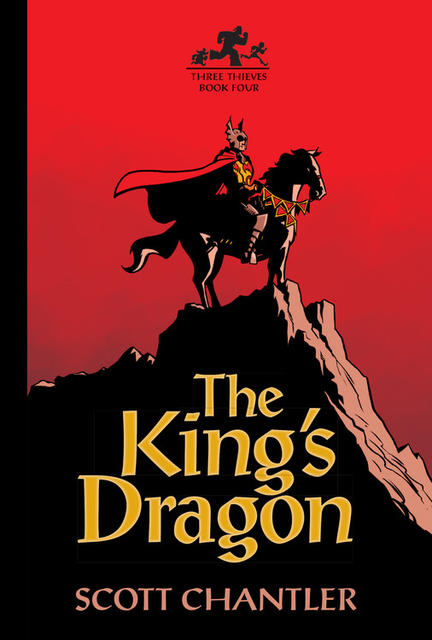 In this fourth installment of the Three Thieves fantasy adventure series of graphic novels, Captain Drake's quest to find Dessa, Topper and Fisk has led him to a remote healing monastery where he believes they have gone to tend Dessa's broken leg. While pursuing his quarry, Captain Drake finds himself beset by memories of his early days as a young and idealistic knight in King Roderick's service. Featured as flashbacks, these memories provide readers with important clues to the unfolding story, such as that the King's Dragons were more loyal to the palace chamberlain, Maarten Greyfalcon, than to the king; that there was a mysterious letter written by the king, meant to be read only at his death, which had disappeared; and that Drake had uncovered a plot to murder the king.

The tale moves forward in both the present and the past, with the flashbacks drawn in black-and-white to differentiate the time. As with the very successful and well-reviewed first three titles by award-winning cartoonist Scott Chantler, high action propels this fast-moving story forward, with sword fighting, chase scenes and a bold and daring narrow escape, while intricate plotlines full of intrigue and suspense (and occasional witty banter) keep the reader guessing. The art is dramatic and evocative, offering emotional close-ups, telling details and believable backdrops. This is a wonderful graphic novel that will engage reluctant readers, providing a painless way to dive into literature and learn about plot, character, setting and other literary devices.

Just a quick side jaunt in the journey, but it's a diversion that adds further depth to a particularly well-wrought tale.

Chantler;s cartooning remains sharp, lively and inviting, and his eye for rousing action sequences is top notch. But it's his skill as a writer that shines through, as he creates a riveting character study of a complicated, difficult, noble and conflicted man, the likes of which one seldom sees in genre graphic novels for this age group.

The King's Dragon is well-written and well-illustrated, and it does an excellent job of adding depth to an already enthralling story. This book will leave readers waiting eagerly for the next instalment.

You don't have to settle for less in literary quality if you want to match a boy to a book.