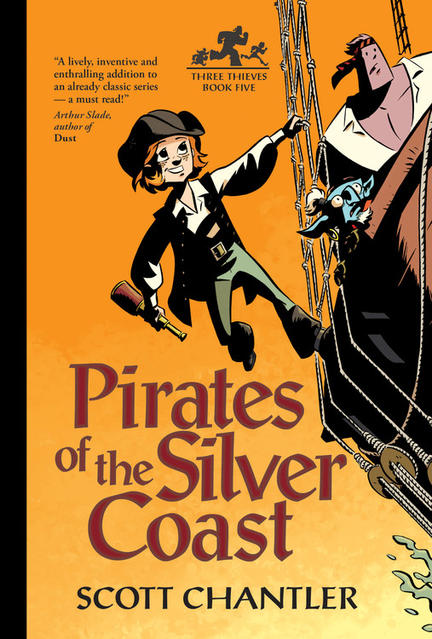 In this fifth book in the Three Thieves series of graphic novels, Dessa convinces the smuggler Quinn to transport her, Topper and Fisk to the mysterious Island of Astaroth. Dessa is convinced her twin brother, Jared, who was abducted years earlier by the Queen's chamberlain, is being held on the island. However, soon after setting sail, they are overtaken by a pirate ship commanded by the King of Pirates, whom they discover is interested in only one treasure on board: Dessa's map to the location of Astaroth! Will Dessa's plan for finding her brother be thwarted? Meanwhile, Captain Drake, still hot on the trail of Dessa and her cohorts, is startled when he comes face-to-face with a young boy delivering him a new horse. Why does the boy look so shockingly familiar?

The titles in author-illustrator Scott Chantler's extremely well-reviewed Three Thieves fantasy adventure series consistently deliver a fast-paced storyline and cinematic artwork that crackles with energy. Here, the twists and turns of the plot, along with further development of the characters, continue to intrigue, while the slapstick comedy and exciting action keep things rollicking and fun. This series works beautifully in the classroom for reluctant readers, both boys and girls. The illustrations give it visual appeal and provide valuable contextual clues to the meaning of the narrative, while the literary elements help develop language skills and vocabulary. Offering children graphic novels as alternatives can help foster a love of reading, and motivated readers become strong readers.