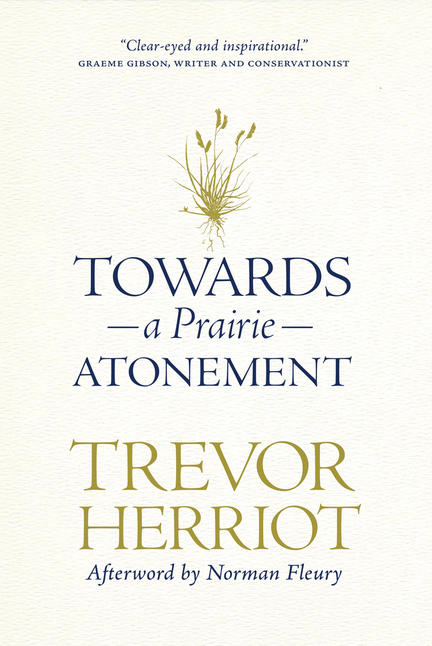 Towards a Prairie Atonement addresses this question by enlisting the help of a Metis Elder and revisiting the history of one corner of the Great Plains.

Set on a prairie remnant seven thousand years old, this book's lyrical blend of personal narrative, prairie history, imagery, and argument begins with the cause of protecting native grassland on community pastures. As the narrative unfolds, however, Trevor Herriot, the award-winning author of Grass, Sky, Song and River in a Dry Land, finds himself recruited into the work of reconciliation.

Facing his own responsibility as a descendent of settlers, he connects today's ecological disarray to colonial decisions to remove the Metis and their community land ethic from the prairie. With Indigenous and settler people alienated from one another and from the grassland itself, hope and courage are in short supply. This book proposes an atonement that could again bring people and prairie together.

TREVOR HERRIOT is a grassland conservationist and naturalist who writes about human and natural history on the northern Great Plains. His last book, Grass, Sky, Song: Promise and Peril in the World of Grassland Birds was a Globe and Mail Best Book of the Year and one of Quill & Quire's 15 Books That Mattered Most in 2009, and it was shortlisted for the Writers' Trust Prize for Nonfiction, the Governor General’s Literary Award for Non-fiction and the William Saroyan International Prize for Writing (Nonfiction).

His first book, River in a Dry Land: a Prairie Passage (2000), received several national awards and a nomination for the Governor General’s Literary Award for Non-fiction. His second book, Jacob’s Wound: a Search for the Spirit of Wildness (2004), was nominated for several awards, including a short-listing for the Writers' Trust Prize for Nonfiction.

Trevor's writing has appeared in The Globe and Mail and Canadian Geographic, as well as in several anthologies. He has written two radio documentaries for CBC's Ideas and is a regular guest on CBC Radio Saskatchewan’s Blue Sky.

He and his wife, Karen, have four children and live in Regina.

Other titles by Trevor Herriot

The Road Is How

Three Days Afoot Through Nature, Eros, And Soul, The

Promise and Peril in the World of Grassland Birds

A Search for the Spirit of Wildness