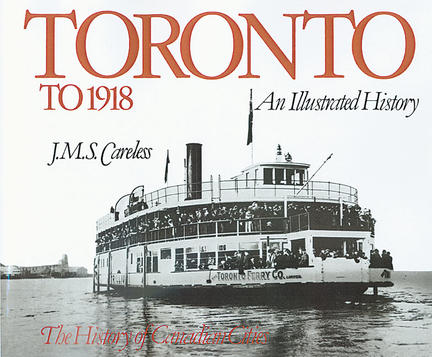 At the beginning of 1793 Toronto was the gateway to a distant portage to the Upper Great Lakes, its permanent population a lone fur trader. One hundred and twenty-five years later it was a solid, vibrant metropolis, an industrial powerhouse supporting half a million residents.

Toronto is a city built by its people, from the original colonial aristocracy of the Family Compact, to the masses of British and Irish migrants who forged its profound links with Empire, to the polyglot flow of international migration that would ultimately transform the city in the twentieth century. This book recounts their stories, and their stories are the history of Toronto's emergence as a world-class city.

In Toronto to 1918, distinguished historian J.M.S. Careless expertly draws Toronto's stories together, creating an illuminating and entertaining portrait of the city. The text is complemented with more than 150 historical illustrations.

J.M.S. Careless, University Professor Emeritus at the University of Toronto, was for many years Chairman of the Department of History. His historical research and writing have brought him many awards. In 1953, he won the Governor General's Award for Canada: A Story of Challenge, and in 1963 the same award for his two volume biography of George Brown, Brown of the Globe (reprinted by Dundurn Press in 1989). In 1985 he received the City of Toronto Book Award for Toronto to 1918. He holds honourary doctorates from seven universities. In 1981 he was created an Officer of Canada and in 1987 an Officer in the Order of Ontario.

In 199 many of Professor Careless's former students and other colleagues contributed studies of their own to Old Ontario, Essays in Honour of J.M.S. Careless (Dundun Press) as a tribute.

Other titles by J.M.S. Careless

Brown of the Globe

Regions, Cities, and Identities in Canada before 1914