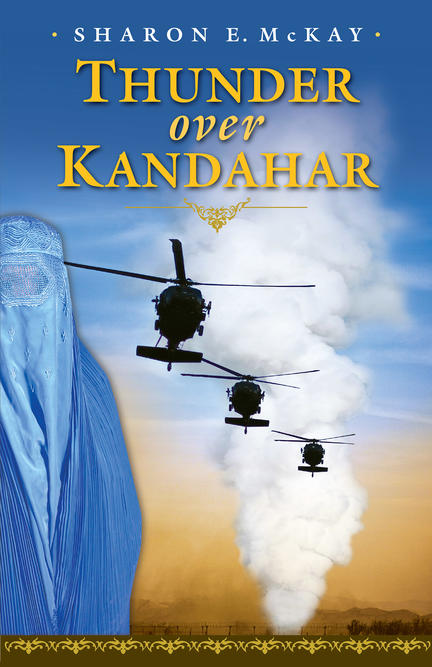 A powerful novel of enduring friendship set amid the terror and chaos of present-day Afghanistan.

Best friends Tamanna and Yasmine cannot believe their good fortune when a school is set up in their Afghan village; however, their dreams for the future are shattered when the Taliban burns down the school and threatens the teacher and students with death. As Tamanna faces an arranged marriage to an older man, and the Taliban targets Yasmine’s western-educated family, the girls realize they must flee. Traveling through the heart of Taliban territory, the two unaccompanied young women find themselves in mortal danger. After suffering grave injuries—Tamanna from a fall and Yasmine from a suicide bombing—the girls are left without the one thing that has helped them survive—each other. Reunited years later in England, Tamanna and Yasmine discover that, despite the horrific events of the past, they are both driven to return home by memories of their families and a longing for their country.

The book features stunning photographs by award-winning photojournalist Rafal Gerszak (The New York Times, BBC World News) that bring readers an immediate sense of the faces and landscape of Afghanistan. Filled with tension and drama, Thunder Over Kandahar paints a vivid portrait of the perils of contemporary Afghanistan.

Rafal Gerszak's work has been published and exhibited internationally.

“This story is so vivid you could believe that Yasmine is real. The heart-stopping action is also tragically real for many children throughout Afghanistan.”

“Provides a gripping, empathetic look at one of the most dangerous and misogynistic societies in existence today through the believable, inspiring characters of Yasmine and her friend Tamanna. Highly Recommended.”

“A riveting and suspenseful story . . . This book is an essential read for students in Grade 7 and up.”

“The girls’ alternating viewpoints capture the heartbreaking trauma, and concerned young people will be caught up in the issues, including the roles of foreigners and the UN, as well as the oppression of women.”

“Paints a vivid picture of the struggles among the disparate groups of Afghan people to survive the atrocities of the Taliban.”

“Filled with drama and tension [this story] realistically portrays contemporary life in Afghanistan.”

“The novel is perhaps best understood not as a fictional slice of contemporary conflict, but as a more enduring example of extreme circumstances inspiring selflessness.”

“This story is so vivid you could believe that Yasmine is real. The heart-stopping action is also tragically real for many children throughout Afghanistan.”

“Fast-paced action and appealing characters . . . bring young readers face to face with the realities of modern Afghanistan, both the dark and the light.”

“What shines through this sad narrative is the love Afghans have for their country . . . [a] gripping tale.”

“McKay . . . portrays the unsettled nature of life in a war-torn country and especially the plight of the women who have virtually no decision-making powers. Highly recommended.”

“An excellent, suspenseful novel for young people interested in the Afghan conflict and who wish to learn about some of the issues in this conflict.”

After moving to Afghanistan from England, Yasmine is at first miserable. Compared to Oxford, Herat is backwards and boring. Then she meets Tamanna, and their fast friendship lessens her longing for home. When a new school opens up in their village, the girls can’t believe their good fortune; but a Taliban attack on the school shatters their dreams for the future. As the climate becomes more dangerous, the girls are left with no choice but to flee. When the two girls are separated, they are left without the one thing that has helped them survive — each other.

Set in modern day Afghanistan, and inspired by her observations during her time there as a Canadian war artist, author Sharon McKay has created another informative and inspiring story through two very different female protagonists. Through their eyes, readers will get a vivid picture of growing up female in a climate of chaos and terror.

The story is well constructed and believable, and there is enough action and suspense to keep both boys and girls interested, but what is most effective about this novel is the message of hope that emerges. There is a new generation of educated young people who are trying to affect change, and with their efforts, peace may someday be possible.

This is not an easy book to read. Afghanistan is a nation fraught with violence, and the author doesn’t shy away from it. From suicide bombers to Taliban attacks, horrifying events are taking place around them, and neither girl escapes unscathed.

Though never gratuitously gory, there are scenes that may upset younger or sensitive readers, making this more appropriate for middle school readers. There is much to think about and discuss here, and this novel should become essential classroom reading for students in Grades 7 and 8.

Tamanna and Yasmine’s dreams are shattered when the Taliban burn down the school that is set up in their Afghan village. Tamanna faces an arranged marriage, and Yasmine’s family is targeted by the Taliban, so the girls decide to flee. When they are separated after travelling through the dangerous mountain passes, they lose the one thing that has helped them survive — each other. Features stunning black-and-white photos of Afghanistan, a list of Afghan terms and a historical timeline.

Other titles by Rafal Gerszak

A photo journal of Afghanistan