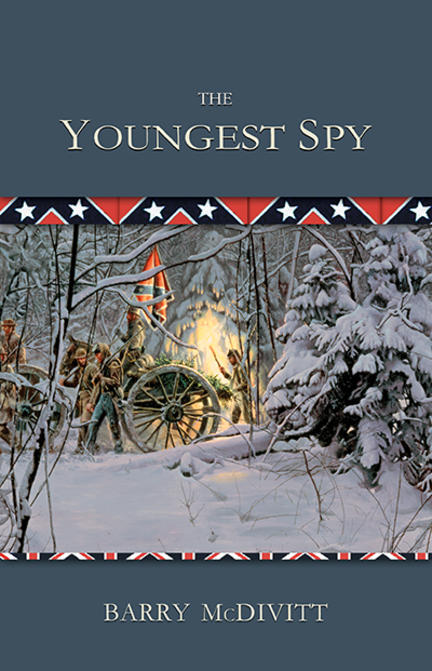 The Civil War is tearing America apart. Sinister people want to drag Canada into the conflict. An ordinary Canadian boy uncovers the scheme and discovers the courage to become a hero as Canada's youngest spy.

Barry McDivitt has spent twenty years in the field of journalism and his award-winning work has appeared on the CBC and Global networks as well as many newspapers and magazines. McDivitt is a writer/producer for Global Television. He has also worked in radio, public relations, Global’s promotions department, and has written several screenplays. McDivitt is the author of the novel The Youngest Spy (Thistledown Press 2007). He lives in Kelowna, BC.

The bloody action of the American Civil War involved some 40,000 Canadians soldiers and even frothed across the border. This nation-forming activity is largely absent from books for young people. However, situations from this period of time are explored in television writer/producer Barry McDivitt’s juvenile novel The Youngest Spy.

Fourteen-year-old George Duguay’s father has joined the Union army, leaving George and his mother to run the family’s chicken business. The egg delivery boy’s movement through Toronto streets makes him valuable to those seeking to send messages or gather information about potential enemies operating in Upper Canada. George dodges dangerous American agents, becomes confidante to a Rebel spy and reports to British representatives. The youngest spy helps uncover a daring plot by southerners to incite an armed invasion north of the forty-ninth parallel.

The writer’s engaging characterization helps readers become fond of the honourable, hard-working George. They will read with concern as the young farm boy puts his life in peril to serve the crown, yet refuses to take money for assuming these risks. At times readers may feel nervous about George’s future, but in other places they will find themselves laughing at the book’s humorous happenings such as the retrieval of an invaluable letter from the business end of an outhouse.

Some readers will have a lot to keep straight sorting out the characters from three different factions who move across a busy backdrop that is splashed with everything from Loyalist immigration to future Canadian nationalism. Sophisticated readers will be thrilled at how McDivitt uses the plot to bring in numerous facts about social and political history. While the generous inclusion of the details of dayto- day life is valuable, sometimes these facts appear rather intrusively in the text. Sentences such as “Eggs don’t spoil as quickly as most other foods, which made them popular at a time when there was no refrigeration” might have been popped into an author’s note. This would leave more room for readers to enjoy the pleasing characters and exciting adventure.

Other titles by Barry McDivitt