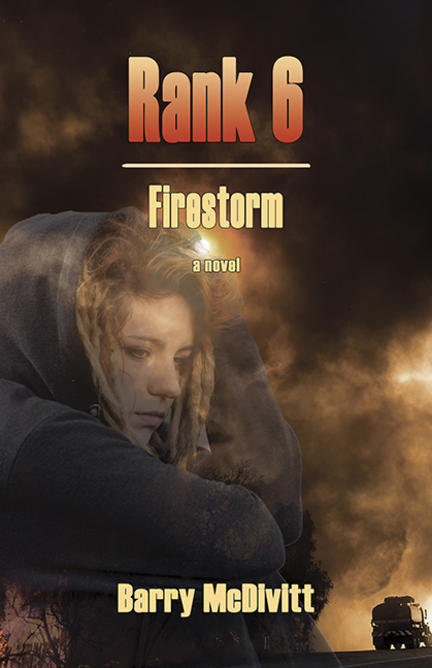 The terror of fire is known to all but when fire erupts into its most terrifying form, Rank 6, mayhem and death are often not far behind. So the question is: Why would someone willingly approach an inferno that swirls with fireballs and whirls with temperatures that can reach 1000 degrees Celsius?

For Emily who makes such a decision, there is no quick, easy answer. She already knows something about destructive power. Her struggles with depression and her own suicidal thoughts had recently brought her face to face with destruction and death. As she rashly races into that danger to rescue a panic-stricken dog, she can't say if she is seduced by the fire’s powers or if it is just her identification with the dog’s vulnerability and helplessness that makes her scorn the deadly risk.

Her actions are spontaneous, thoughtlessly bold at the beginning, but once cut off from the safety of the firefighters, and alone in a fiery inferno, Emily begins to realize that her reckless actions could kill her. When the thought takes hold, she knows that she really does want to live and scrambles to kick her survival instincts into gear. Instinctively, she begins to realize that the dark struggles and personal battles of her life may be part of the solution to save he life. Maybe adapting the negative qualities of her life into forces of survival, will give her the chance to stay alive. Maybe the experience that made her feel so lost can save her. Time is short and, as the terror of the fire compounds with her panic, self-doubt, injury, and exhaustion, she finally reaches deep within herself to see what is there.

Barry McDivitt has spent twenty years in the field of journalism and his award-winning work has appeared on the CBC and Global networks as well as many newspapers and magazines. McDivitt is a writer/producer for Global Television. He has also worked in radio, public relations, Global’s promotions department, and has written several screenplays. McDivitt is the author of the novel The Youngest Spy (Thistledown Press 2007). He lives in Kelowna, BC.

“This is what it will look like when the world ends.” The thought came suddenly to Emily and she found it both thrilling and disturbing. Maybe she should share her theory with the others. She looked around the van and noted the tension on every face, except for the jovial boy with Down syndrome. All the other campers were obviously spooked. Even Big John, the expedition leader, seemed worried. The smile that had never left his face during the classroom session earlier that morning was gone. He was middle aged, imposingly tall, and claimed to be an expert on wilderness survival.

Emily decided not to say anything about the apocalypse. Nobody would want to hear her depressing thoughts. They never did. She knew perfectly well that she was ugly and a loser, but at least she was always considerate of the feelings of others. No point in making someone else more depressed and worried than they already were.

The girl sitting next to her couldn’t even bring herself to glance out the van’s windows. Not that there was much to see anyway. The smoke was so thick you couldn’t tell if you were passing houses, farms or forest.

“This is what it will look like when the world ends.”

As Emily watched in horror the tallest flames joined together and began whirling around. It looked like a tornado made of fire.

. . . the firenado changed direction and headed straight for her. It was as if the monster had seen her standing on the shore and was determined to devour her.

Other titles by Barry McDivitt