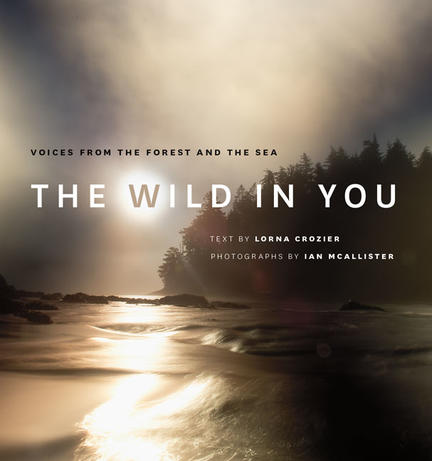 "Each poem and photograph in this book honors the patch of Earth we have carved our home in; its squelch of mud, whale song, the berry balanced on a white bear's tongue. Together, Crozier and McAllister crystallize an ecosystem as powerful as the grizzly bear and as fragile as a crane fly’s wing." —Eliza Robertson, author of Wallflowers

A gorgeous and stirring collection of photos and poems from photographer Ian McAllister and Governor General’s Award-winning poet Lorna Crozier that reveals how the startling wildness of the natural world is mirrored in the human heart.

A testament to the miraculous beings that share our planet and the places where they live, The Wild in You is a creative collaboration between one of our time’s best nature photographers and one of North America’s most talented and critically acclaimed poets. Inspired by the majestic and savage beauty of McAllister’s photographs, Crozier translates the wild emotion of land and sea into the language of the human heart. Featuring over thirty beautiful full-size photographs of wolves, bears, sea lions, jellyfish, and other wild creatures paired with thirty original poems, The Wild in You challenges the reader to a deeper understanding of the connection between humans, animals, and our earth.

BC Books From the North Coast