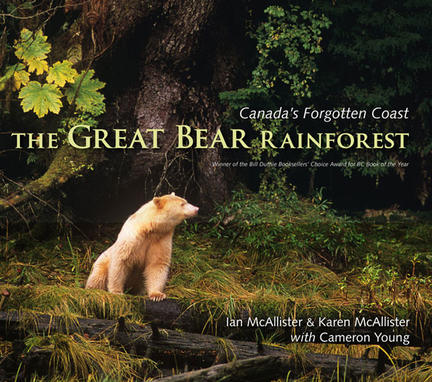 The southern half of Canada's west coast is justly famous for its fabulous scenery and pitched battles to save remnants of its magnificent coniferous forest-but what about the northern half? Between Vancouver island and Alaska, the mainland BC coast winds through a 250-mile wonderland of forested islands and inlets every bit as enchanting as the southern half, but still very much as nature created it, a wonderfully complex and delicate rainforest masterpiece ten thousand years in the making. The area is one of the northern hemisphere's richest unprotected wildlife habitats, the home of Canada's largest grizzly bears as well as the rare all-white spirit or Kermode bear.

Ian and Karen McAllister, both environmental campaigners, have spent over ten years exploring, photographing and researching this once-forgotten coast. The book contains over 150 stunning colour photographs, including some of the most extraordinary images of wild bears ever seen in print, lush river valleys where grizzly bears feast on salmon, dramatic Coast Range mountaintops, exotic plants of the ancient rainforest, and some of the most magnificent coastline in Canada. With these photographs, a personable, informative commentary by Ian and Karen and environmental writer Cameron Young, and full-colour maps and drawings, this book is the first to unveil the beauty and magnificence of this unique place.

Since 1990, fourteen large rainforest valleys on the mainland coast of British Columbia have been lost to industrial logging. The publication of The Great Bear Rainforest aided Greenpeace, the Sierra Club, Ian and Karen McAllister's Raincoast Preservation Society and other environmental groups successfully lobby BC's provincial government for a moratorium on grizzly-bear hunting and the protection of a large portion of the area as parkland in 2001.

Karen McAllister is a conservationist with a special interest in the flora of BC's mainland coast. Born and raised in Alberta's Rocky Mountains, she studied biology and environmental studies at the University of Victoria. She is a founding member of the Raincoast Conservation Society. The Great Bear Rainforest is her first book.

Cameron Young teaches journalism at the University of Victoria and is an environmental writier specializing in ancient temperate rainforest. He is the author of Clayoquot on the Wild Side and the award-winning Forests of British Columbia. He assisted Ian and Karen McAllister in the writing of The Great Bear Rainforest: Canada's Forgotten Coast, the winner of the Bill Duthie Booksellers Choice Award for BC Book of the Year.